Share All sharing options for: Making Mackey a Nutcracker

Saturday afternoon we go for payback.

On March 4th last year we headed to Columbus needing a win in order to stay alive in the race for a Big Ten championship. The desperate Buckeyes knocked us off 80-77 in overtime and cost the Baby Boilers a share of the Big Ten championship. They didn't even have the decency to parlay that win into an NCAA berth. A loss to Michigan State in the first round of the Big Ten Tournament sent them to the NIT, which they eventually went on to win. 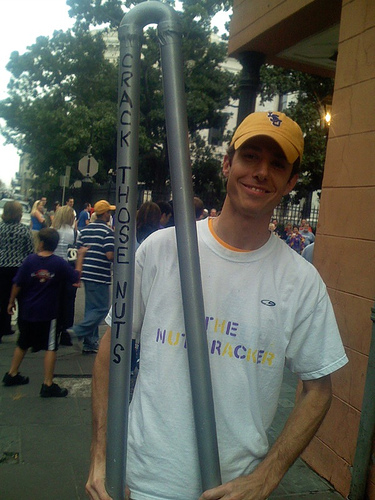 We find ourselves in a similar situation again. The Buckeyes stand in our way of playing for a share of the title next week when we go to East Lansing. Of course, we still need the Spartans to cooperate and lose another game, but that is moot unless we take care of business. Ohio State is the toughest of two challenging home games before that showdown. I call them the toughest because, like Illinois, they present a huge matchup problem for us. There are certain teams that just match up well with better teams and give them fits. Ohio State is one of those teams. Like Illinois, they tend to have streaky outside shooting. That is often the difference between a win and a loss for them. They have enough size inside to give us problems which only amplify their good shooting performances.

Of the five teams jockeying for an NCAA bid the Buckeyes are probably in the best shape. The win earlier this week over Penn State was key because it was the only game between the two this year. Ohio State also swept Michigan and split with Minnesota. They are so far 1-4 against the top three in the league (Purdue, Illinois, Michigan State), but they have avoided a bad loss in conference play. I don't count losing at Northwestern as a bad loss, and as long as Ohio State wins at Iowa next week and at home against the Wildcats in the season finale they will have 20 wins, 10 in conference, and likely be on the good side of the bubble because of their non-conference work.

Getting a season sweep of Purdue, therefore, would be icing for them, and it would likely move their seed up a little. Aside from missing Robbie Hummel when we went to Columbus, our biggest problem was containing their guards. Evan Turner and William Buford flat out abused us with their ability to drive and score. The duo combined for 48 points on 19 of 29 attempts from the field. That was an absolutely embarrassing effort by our defense and cannot be tolerated. It is even more troubling that we just let Manny Harris go nuts against us. Many of his shots were contested though, and he may have simply had a phenomenal night.

When Buford and Turner weren't finishing B.J. Mullens was there to clean things up. He had 17 points on 8 of 9 shooting off the bench and we essentially turn the game into a layup and dunk drill for them. Turner's line is even more impressive when you consider he had 12 assists, mostly to Mullens and Buford. We have to lock down on Turner. He put on an absolute show the first time. Our defense should be offended and they need to make it their mission to stop him.

Statistically it is amazing that we got that game to overtime. Ohio State shot 60% from the field, outrebounded us by 16, and allowed just two offensive rebounds. JaJuan had a career high 30 points to keep us alive in that one, but like everyone else he was a non-factor on the glass. It is very plain what we need to do. We need to rebound better and we need to hassle them into a poor shooting night. A 60% night from the field against our defense is a gross statistical aberration, or at least it was until Thursday night. If it happens again, this time in Mackey Arena, it may be time to panic a little headed into the tournament.

We will have two key factors on Saturday that we did not have in Columbus. First, Robbie Hummel will be back. His mere presence on the floor seems to make us better. Second, Bobby Buckets will be playing some minutes. He has done very well since being asked to play against Penn State. He did not play the first time around as we opted to go with a seven man rotation. By the overtime we had nothing left (though Ohio State essentially played just seven men as well).  Calasan had better not wimp out again because Thursday night proved just how much we need his presence with Johnson. If we lose those two again we have absolutely no size and we can expect Mullens and Dallas Lauderdale to put on a show of dunks.

The same things we failed to do on Thursday apply in this game. We have to step out and contain heir guards, preventing them from driving to the basket. We also cannot let JaJuan get in foul trouble or we will get torn apart on the interior. We absolutely have to have a better rebounding effort this time around. Marcus Green is critical in this area, especially since he has been playing better of late. He was a virtual no-show in Columbus.

An Ohio State-centric preview can be found at Eleven Warriors, as they are a bit apprehensive about the game. The bottom line is that Ohio State likely isn't as desperate as Michigan is for an NCAA bid. A win at Purdue would lock one up for them, but a loss is far from disastrous as they have to like their chances with Northwestern and at Iowa to finish the season. They also know they are going to get a chance to prove themselves in the Big Ten Tournament against a fellow bubble team in round one. At the moment, however, they may want to avoid the #6 slot. Yes, that gives some bubble team a free shot at Indiana, but it also means a longer road in Indianapolis and a matchup with Michigan State, Purdue, or Illinois. Considering the Spartans, Boilers, and Illini could very easily end up tri-champions the six seed is not a comfy spot.

It is a bit of a reverse scenario in that we now need this game more than Ohio State does to meet our personal goals. Because of that and the fact we are playing at home I think we'll pull this one off. That means everyone needs to cheer like hell for Illinois on Sunday. I would even turn the blog blue and orange if it would help. Purdue 71, Ohio State 64 (*Special Note: Ohio State is the only team in the Big Ten that has a winning record overall against Purdue. They are now 80-79 all-time against Purdue)

On one final note, I want to offer my sincere thanks to everyone who has helped out the Paint Crew in their challenge against the Izzone to raise money for Coaches vs. Cancer. I don't know how much yesterday's FanPost helped, but more than $1,000 were raised in 24 hours. If anyone saw that and contributed, I thank you immensely.