I didn't think anything of it last night when word broke late that Nemanja Calasan wouldn't play. Early in the game when Robbie Hummel did his best NBA Jam impression, (HE'S ON FIRE!!!) it looked like we were going to be fine. Then it happened. The officials decided they weren't going to let JaJuan Johnson participate in this contest and he racked up three of the fastest fouls I have ever seen. The only time I have seen that happen was in a high school game I was covering two years ago between Kokomo and Zionsville.

In that game, Kokomo's Brandon Wood (Then headed to Southern Illinois on a D-1 scholie) was suspended for the first quarter because of a missed practice. The Kats were awful that season, but he was a fantastic player. He decided to get revenge for his suspension by committing four absolutely stupid fouls in four minutes as soon as he came into the game in the second quarter. It was obvious he was showing his attitude, and he quickly picked up foul #5 in the third quarter, leaving with just two points in about 6 minutes. Ironically, Kokomo trailed by 20 when he fouled out, but they played better with him on the bench, cutting the lead to one late before losing. 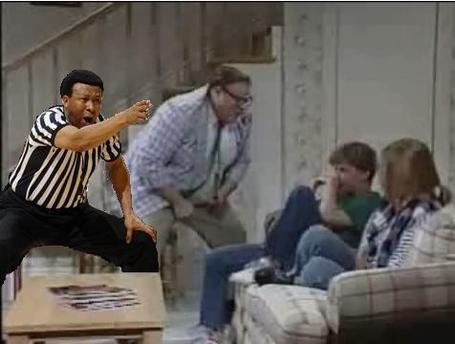 Did you know a search for "Ed Hightower photoshop" brings up 3,670 google images? I think I would have preferred Matt Foley as a ref last night, because our title hopes are now LIVING IN A VAN DOWN BY THE RIVER!!!

There is obviously a huge difference between that example and last night. Against Zionsville, Wood was the best player on the court and intentionally submarined his team's chances, yet they nearly won in spite of him. Last night, JaJuan Johnson was one of the best players on the court, yet he was taken out of the game by some questionable calls. During the Maize N' Brew Liveblog last night (of which I, Boiled Sports, and opponents will likely team up on in the future) some thought it was karmic retribution for the way the officials took Manny Harris away in game one. I think this was bigger for three reasons:

JaJuan played 14 minutes last night, scoring 6 points and grabbing four rebounds with no blocks (a key stat). What should be noted, however, is that he played the last 8 minutes of the game with four fouls, notching half his points and rebounds in that 8 minutes. It was also obvious by his play that he was severely limited in what he could do defensively as he went out of his way to avoid contact and that fifth foul. Again, Sims was a smart player and took advantage of this by attacking because he knew JaJuan couldn't make more than a token effort to guard him. When JaJuan re-entered we trailed 66-55 with 7:58 left, so we effectively had him for 6 minutes of the first 33 and trailed by 11.

Now let's look at Manny Harris and for the safe of argument say he was wrongly ejected by the officials in game one to keep it fair. Harris played 18 minutes (four more than JaJuan) and was 2 of 7 from the field for five points and no assists (with assists roughly equaling JaJuan's blocked shot statistic in terms of impact). JaJuan picked up his 4th foul at roughly the same time Harris was ejected from game one, but he had only played 6 minutes to that point while Harris was able to play 18!

Michigan was also leading by 2 at the time in spite of Harris' poor play to that point, while Purdue trailed 48-41 when JaJuan picked up foul #4 with 16:07 left in the second half. Four of those six minutes played by JaJuan were with three fouls to start the second half too! He essentially had to leave the game almost immediately after each first half foul. Because we were missing Calasan is defense it made sure that when he played, he was hindered for everything but roughly the first 3 minutes of the game. How is that not more of an impact than Harris' ejection? The impact is even magnified when you consider that without JaJuan we still played them to a 9 point game, but without Harris Michigan went el foldo and lost by twice as much.

These are all "what if" scenarios of course. There is no guarantee that JaJuan has his usual 15-10-4 line without the foul trouble. We also don't know if Manny Harris plays the rest of the second half in game one like the beast he was last night. My point is that JaJuan was never even given the chance to affect last night's outcome, while Harris had plenty of opportunities to make his mark in Mackey Arena, but didn't. That is why the official's decision to remove JaJuan Johnson from last night's contest had a larger impact.

There are other factors to consider of course. The first is that Big Ten officiating has been craptacular all season long. Michigan got hosed by some calls last night too. The second is that I have to give credit where credit is due. Harris and Sims played out of their minds last night when their team needed them the most. It was a lot like last year's game at Ohio State in that we ran into a desperate team that not only played well, but perfectly exploited the chances that were given to them. If Calasan was healthy and JaJuan hadn't been in foul trouble we likely would have been closer, but is it enough to make a difference? I don't know. Sims at the very least wouldn't have had the interior open the entire night.

Michigan also flat out shot the rock last night. It often didn't matter if the shot was contested or not. It was going in the basket, especially in the second half when they shot an absurd better than 80% from the field. It's hard to beat any team when they shoot that well, regardless of who is playing. I don't even think our defense was that bad last night. They just kept hitting contested shots and couldn't miss in the second half (except from the free throw line). I feel like I am going back on a 1,000 word argument here, but the Wolverines did a great job of refuting it by simply out-playing us for most of the game. We just never had an answer for Harris or Sims. I cannot help but think, however, that a healthy Calasan and a non-fouling JaJuan could have at least affected Sims. Would they have erased 10 of his points? I don't know. Conversely, would Harris have scored 19 points in the last 19 minutes of our first game? Again, we don't know.

The plan for the weekend is simple. We beat Ohio State on Saturday and cheer like hell for Illinois on Sunday. If Michigan State wins in Champaign the Big Ten title is theirs because they are not losing to Indiana. If the Illini can grab the win (assuming we hold serve at home) we will at least have a chance to tie.

One thing was made abundantly clearly last night. This conference is absolutely brutal from #1 down to the #9 spot. Even #10 Iowa has done some damage with wins over Northwestern, Wisconsin, and Michigan. The Big Ten Tournament here in two weeks is going to be a hell of a lot of fun, especially the Friday session. We currently have five losses in conference play, but even if you give us all of our players completely healthy we still might have three.

The Illinois game in Champaign was going to be a loss even if Robbie played. He played 39 minutes in the home game against Illinois and we still lost, so credit the Illini there. That's an honest sweep of us. Last night is very questionable too in terms of what difference there would have been if we had everybody. I think only the Ohio State and Penn State road games are ones that got away because of Robbie's injury or other players' illness. Unfortunately, those two games are currently the difference between first and second place right now.

I'll have more of an Ohio State preview up either later today or tomorrow morning, but for now we have to simply rebound and get these last three games so we can secure a top 4 seed in the tournament. I don't think that is out of the question at this point, especially since there isn't a single team that has truly distanced themselves from everyone else in the country. If we get these last three games and take a game or two in Indy we'll still be just fine for the big tournament.