For a slow Tuesday there is plenty of news involving us, thus necessitating a sort-of Boilermakings. I say sort of because It doesn’t really touch on the other sports, but it is mostly focused on football and basketball. Some of it is very good, and some of it is bad as ESPN continues to hack at the Big Ten. In regards to that, I post the following gem from Pat Forde in today’s Forde minutes column:

Dear Big Ten: The 1950s Called, They Want Their Playing Style Back

When Penn State beat Illinois by the crime-against-basketball score of 38-33 last week, it underscored the creeping nature of the Big Ten (24).

There are other slow leagues out there -- the Pacific-10 (25) comes immediately to mind -- but none that features nothing but grind-it-out, half-court teams. In the Pac-10 you at least have Washington and Oregon getting up and down the floor and squeezing off more possessions. In the Big Ten, nobody runs.

Check Ken Pomeroy's stats for proof. His adjusted pace figures show that every one of America's other 30 conferences has at least one team ranked higher than the Big Ten's fastest team.

That would be Purdue (26), which ranks 128th nationally in pace. The Boilermakers broke the speed barrier Saturday by scoring 81 points against Indiana, the first time in February that a Big Ten team scored 80 in regulation.

It also marked just the third time anyone has scored 80 in regulation in a league game this season. The other two both came in the same game: Ohio State 93, Indiana 81 on Jan. 31.

Well, I am sorry that we value that little thing called defense. Too bad it has won us 21 games this season and is reason enough that most teams don’t want to play us in March. Oh, and Pat? You might want to check out what happened last year in the NCAA Tournament. As one of the nation’s toughest, most grind it out teams we only ran past Baylor 90-79. We beat the Bears at their own game, something only great teams do. Oh, and there’s Blake Griffin, clearly one of the best players in America an indispensable part of his team. He is shooting an astounding 63% from the field on the season. Against us: 5 of 13 (38%) in one of his worst games during a great season. The Sooners were very lucky to win that game in New York, and with Griffin they may be the best team in the country.

So what if we win ugly? Isn’t that the point of playing the game? I’m downright grateful we’re scoring almost 70 points per game. My high school coach thrived on defense. It was common that he often had 30-28 games by playing his 2-3 zone and simply not allowing teams to score. I don’t care if we have 45 points or 125 when the game is over. The point is to have at least one more than the other team. If this style is the best way to get that result then do it. I love our defense and wouldn’t give it up for anything.

GBI posted some interesting news today with the announcement of Royce Adams and Tommie Thomas moving to wide receiver. This always fills me with apprehension. I believe it was Mgoblog last year that said players who change positions then are expected to be saviors are a sign of a struggling team. While the guys that have done this in the past for us have performed well (Keith Smith, Anthony Heygood, etc.), it is a disturbing trend that goes in line with the fact we’re a struggling team.

That now makes more than half of our returning scholarship receivers players that started their careers elsewhere. A further knock against our ability to get and keep quality pass catchers comes from the fact that former walk-on Jake Standeford outplayed heralded recruit Selwyn Limon for his entire career. Smith is a keeper I think. Thomas and Adams at least have experience at the position from high school and they are defensive backs. Those skills generally transfer quite well, but can they get the route-running down that is so critical to our passing game. Anyone can catch the football. We’ve had a severe lack of people that can be in the right position at the right to catch said football lately.

Our recruiting focus also shows that help is on the way. It will be interesting to see who emerges from this battle since Thomas and Adams moved before spring practice. Will they have a leg up on Xavier Reese, Gary Bush, and Eric Williams, or will any of those guys see the field immediately in the season opener despite not having spring practice?

Both Thomas and Adams are eager about the move. We haven’t seen Thomas on the field at all, so it remains to be seen if this is a loss for the secondary. I am concerned about Adams shifting over because you can never have enough depth, but it not like we can’t move him back if necessary. Ray Williams made the move midseason and played well. He didn’t even have the advantage of having played the position before.  We also have plenty of recruiting help coming in the secondary thanks to guys like Aristide, Edison, and Quinn. This could also be a side effect of getting Torri Williams back.

At this point I say let it ride. We can’t possibly do worse than last year, can we?

In other football news Athletic Director Morgan Burke says we now need an upper deck on the east side of the stadium. While I do think Ross-Ade would look sharp with an upper deck I do openly question its value. Is it really worth the 15 extra suites and only 2500-3500 extra seats total (with the destruction of the South End zone bleachers) to undertake a massive project like this? I guess since we’re already spending $100 million to renovate Mackey Arena we might as well do it.

We can’t even sell out the stadium as it is now. I don’t even think the seats would be that great. I am assuming that any upper deck would be a lot like the seats I sat in at Michigan State this past season. I doubt people are going to be excited to spend money they are not spending (assuming it would attract new ticket holders that we don’t currently have) to sit far from the field, crammed into a tighter space than we currently allow, and need a Sherpa with oxygen to reach said seats. 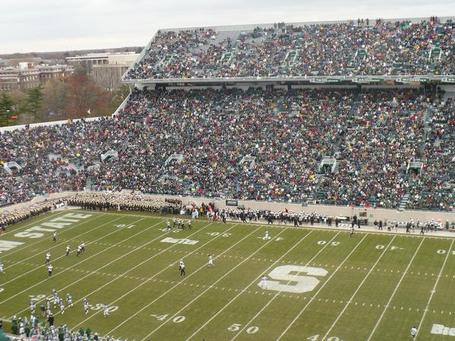 Bring your own sherpa and O2 to future Purdue games

As long as I live in Indiana I will be getting season tickets. You can put me down for 2 of the 42,000 already gone each year. This just seems like a risky proposition when we already have trouble selling 10,000 seats to games. You can’t tell me they are all in the north and south end zones, either. Assuming the seats are similar to the picture above I doubt it will be easy to attract 10,000 more season ticket holders from this one venture.

Unfortunately, we have to get good again first. Then we have to stay consistently good. I think this program whiffed on a major chance in 2005 when we broke records for season ticket sales and started in the top 15 only to fall flat on our faces in a season of very high expectations. Had we succeeded then we might already have that upper deck.

On the other hand, everyone in this conference I spending money to improve stadiums. We’re never going to have a giant place like Michigan, Ohio State, or Penn State, but when Indiana is dropping loads of money to improve their place it is a sure sign of what’s going on. Maybe they really did hear Mrs. T-Mill’s reaction when I first took her to Bloomington for the 2003 Bucket game. In showing her the stadium as we drove in she said, "Where’s the rest of it? Do more seats fold down when the game starts?" That’s no longer the case in Bloomington, and we’re probably going to follow when we build that upper deck.