A huge thank you tonight to all of you readers. I wanted to report that the Hammer & Rails readership passed the 300 member barrier today! Thank you, everyone for making this bigger than I ever thought possible!

The playoffs are continuing to wind down, as only Florida, Pennsylvania, and Jesse Schmitt in Kentucky were active this week. Will Lucas and Jeremy Cornelius had the potential to meet this coming week if both of their teams won. According to GBI we also have two more recruits. that is more good news as both can potentially play in our depleted secondary. 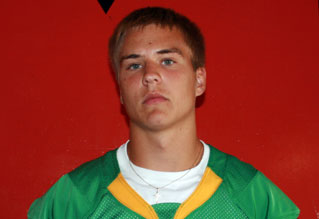 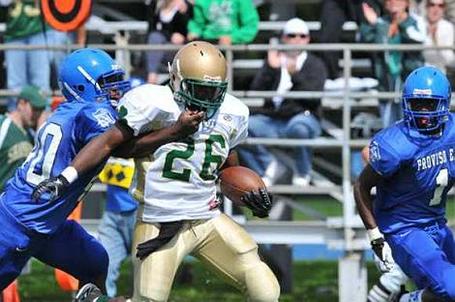 Jeremy Cornelius - WR - Harrisburg, PA (Bishop McDevitt) - So much for the matchup between Cornelius and Lee. #1 ranked Bishop McDevitt was upset by Cumberland Valley 34-27 to end their perfect season. The loss came in double overtime to make things even tougher. Cornelius had one catch for nine yards.

E.J. Johnson - DB - Cocoa, FL (Cocoa) - Cocoa will have a chance to defend its class 2A state championship at the Citrus Bowl in Orlando this week as the Tigers won 17-16 over Godby. They now get a matchup with #1 ranked Glades Central. Both teams are undefeated. Johnson was given credit for pressuring a critical missed extra point and a missed field goal. As always, video is part of E.J.'s wrap up. Cocoa's game will be played December 12th at 7pm. According to Florida native Mrs. T-Mill there is TV coverage, so Iw ill try to find some details this week.

Will Lucas - LB - Lakeland, FL (Lakeland) - The class 5A playoffs last a week longer than the 2A playoffs, so Lucas' team was only in the quarterfinals this week. They responded well with a 43-29 win over Fleming Island. That puts the Dreadnaughts in the state semifinals against Plant. Lakeland was ranked 23rd nationally last week according to USA Today, with #1 St. Thomas Aquinas likely waiting in the state championship.

Jesse Schmitt - LS - Louisville, KY (Trinity) - Trinity's bid for another state championship ended with a 34-10 loss to Louisville St. Xavier. There is an actual newspaper story this week! A win would have given Trinity four straight state titles.

Justin Sinz - TE - Edgar, WI (Edgar) - Sinz was a visitor this weekend and the hosting efforts of Kyle Adams paid off. Sinz is a 6'5" 227 pound quarterback that will be a tight end once he gets to Purdue. According to Rivals, he is ranked as a two-star prospect, but had interest from Notre Dame, Wisconsin, Minnesota, and Duke.

This is a bit of a curious commitment. Tight end is a position that was a little bare this year because of injuries, but will be loaded next season. Kyle Adams and Jeff Lindsay will be returning. Jeff Panfil and Colton McKey will be back from injury. De'Ron Flood and Gabe Holmes will be coming in as freshman recruits. Mike Lee ahs played a lot of tight end this year. Jordan Brewer could also finally come on campus. That gives us a ton of options at the tight end position.

Because of all that depth Sinz is a likely candidate for a redshirt. He may also end up in another position. Still, his numbers are quite impressive. Check out this article. Sinz is a four year starter and an all-state caliber quarterback, a pretty good defensive back, and was even a first team all-conference kicker. He is also quite a basketball player. That tells me he has the same amount of pure athleticism that many of our other recruits have.

As for this season's honors, he was only named Wisconsin's AP state Player of the Year in leading Edgar to a state championship. Edgar outscored teams by a whopping 651-20 in going 14-0. Like many of the other guys on the list above, he is simply a winner. That means he has a place on my football team.

So where do we put him? Personally, I think he would buried at tight end. I would love to see him roaming the defensive backfield as a monster 6'5" safety and leveling people at will. ESPN even seems to think he might have a future at quarterback. The versatility he has shown in high school means he will likely learn whatever position we put him at very quickly.

Antoine Lewis - DB - Maywood, IL (Proviso East) - Our second new commitment is actually a switch, as 3-star defensive back Antoine Lewis switched his commitment from Minnesota to Purdue. We won't have to worry much about a Roy Roundtree situation when we face the Gophers, either. Minnesota goes off the schedule for two seasons after this year, so we don't return to TCF Bank Stadium until 2013 at the earliest.

Lewis is primarily a cornerback and will likely be thrown right into the competition with seemingly everyone except myself for time in the defensive backfield. He is another speedy guy that also has experience on offense, scoring 10 touchdowns as a receiver. Proviso East had a disappointing season, going just 2-7.

Lewis is a guyt hat Hope compared to Jacques Reeves, who is one of our few defensive backs to have a very successful career in the NFL. Right now I have visions of him and Jhonny Faustin combining to give us a couple of dominant, speedy, shut down corners. There is nothing wrong with that. I leave you only with video of him. He is at a position where we have a ton of people competing for time, so his impact next season is only speculation. He could play a lot, or he could redshirt. We just don't know.