I am encouraged by this portion of the schedule. We have passed our early season tests without truly playing well. 3-point shooting was a major issue against Tennessee and Wake forest, yet it did not cost us either game. Now we get a slight break in the next two games. I call it a slight break because we will be favored, yet each opponent presents a set of challenges. Buffalo won 21 games a year ago and was one of the favorites in the MAC tourney. Valparaiso features a pure scorer I couldn't be more proud of in fellow Kokomo Wildkat Brandon Wood.

These are games we should win. There is no question that a loss in either one would be a shocking upset. Still, it is an opportunity to work on some things. We need to find our shooting touch. Patrick Bade needs more game reps to learn how to finish near the basket. Kelsey Barlow needs to continue his development. D.J. Byrd needs to recapture his first game magic. Sandi Marcius needs to shake off the rust if he returns this coming week. It is not all about the freshmen, either. Keaton Grant has been a bit disappointing so far. Ryne Smith and Robbie Hummel aren't shooting as well in the last few games. Buffalo and Valpo present opportunities to work on all of these areas before a tricky road trip to Alabama 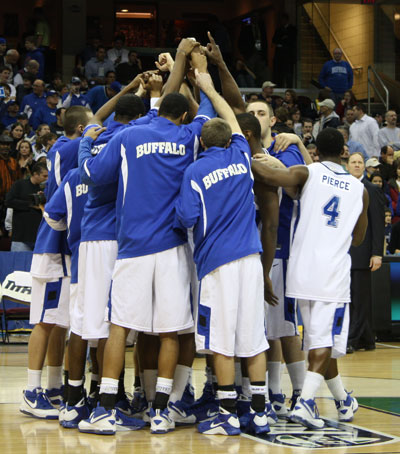 This will easily be Buffalo's toughest test on the young season. They have wins over Navy, Towson, and a pretty good Army team. The two losses have come against Vermont (by a point) and Canisius (by two points). That is not exactly a resume that screams at large bid by any stretch. Some of the highlights of last year's campaign were a four point loss to UConn and an 11-5 MAC record. The UConn loss tells me they have the ability to be feisty, but they also lost a game to an awful Evansville team.

Buffalo is not a high scoring team. This should play right into our defensive-minded hands. Their leading socrer (and only player in double figures) is Rodney Pierce at 10.8 ppg. He is a 6'2" senior guard that does most of his work inside the 3-point arc. He is joined in the backcourt by profiicient point guard John Boyer. Boyer is just 6'1", but does a little of everything as evidenced by his 7-5-5 stat line for points, rebounds, and assists. Both of these players are penetrating guards that look to dish off as well. As a team Buffalo averages better than 13 assists per game. That equals out to balanced scoring to offset their lack of size.

Max Boudreau is currently second on the team in scoring, yet he plays just 19.8 minutes per game. He is also a senior at 6'7" and is French Canadian. Let us hope he doesn't let out his frustration of losing the Expos on us. Calvin Betts (8.8ppg, 7.8rpg) is a 6'3" senior that leads the team in rebounding. Titus Robinson (8 ppg, 5.4 rpg) is a 6'7" sophomore that with Boudreau offers the Bulls' only regular size in the post. This is a senior dominated team, but they are not very big. Mitchell Watt and Adekambi Laleye are the biggest players at 6'9". Laleye is a senior that has played sparringly in all five games. Watt averages almost seven points per game, yet is not a strong rebounder.

Buffalo is a relatively deep team. 10 players have played in all five games with nine averaging better than 10 minutes. Zach Filzen and Sean Smiley can be considered 3-point shooting specialists, but as a team the Bulls hit barely a third of their shots from long range. In short, we don't have worry about them getting hot from long range like South Dakota State was capable of. We don't have to worry about being pounded by a bigger team like we did with Wake Forest.

A giant red flag in our favor is turnovers. We force a lot of them. Buffalo has averaged almost 19 per game against much weaker competition. This should be a huge advantage in our favor. Buffalo also does not shoot well from the field (41.6%). As long we can generate normal defensive pressure, nothing above what we usually do, They won't be able to score enough points or generate enough shots to beat us.

This game is a complete mismatch on paper. I simply don't see any way we can lose this game without an absolutely atrocious performance. Buffalo is a senior-laden team with experience, but they don't have a got to scorer to get points when they need them. They don't take care of the basketball. They don't have a dominant post presence to attack our weakness if JJ is in foul trouble. They are not a strong team on the perimeter to shoot over our defense. All this equal a fairly easy non-confernece victory for the good guys. Purdue 78, Buffalo 58