Share All sharing options for: Welcome to the Fold: Tracking Edition week 17

I should only have one more week of tracking our incoming recruits, but it is nice to see this class grow by four very promising commits this week. Once the season is over for everyone I'll hold off until signing day, thus finally putting to bed the 2009 season. In the mean time, we still had some championships decided this week. 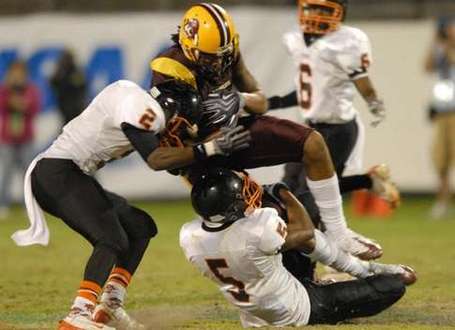 E.J. Johnson - DB - Cocoa, FL (Cocoa) - We have a second state champion from our 2009 class. E.J. Johnson joins Justin Sinz as a state champion with Cocoa defeating Clades Central 27-13 for the Tigers' second straight state championship. As usual, Florida Today is right one the ball with video highlights of this win. The Tigers finished a perfect 14-0. From what I have seen I really like junior running back Chevelle Buie too, so he might be worth a second visit next year.

Will Lucas - LB - Lakeland, FL (Lakeland) - There will be no rematch with St. Thomas Aquinas for the state title. Lakeland's perfect season ended with a shocking upset as Tampa Plant blanked the Dreadnaughts 20-0 in Florida's class 5A State semifinals. Even with a win Lakeland would not have gotten he rematch, as USA Today's top ranked team in St. Thomas Aquinas was shocked by Bradenton Manatee. Interesting note in this game. Tony Dungy's son Eric Dungy had the game-clinching interception. Here are some video highlights.