Share All sharing options for: Welcome to the Fold: Tracking Edition week 15

Looks like we're down to just the Florida and Pennsylvania guys now, as the high school seasons continue to wind down. I'll also include Michael Eargle and Jeremy Eddington this week.

Jeremy Cornelius - WR - Harrisburg, PA (Bishop McDevitt) - Bishop McDevitt keep rolling through the Pennsylvania state tournament with a 49-21 win over Penn Manor. It is interesting that Corenlius played some defensive back in this one, especially with our dearth of experience there next year. Cornelius even had a 35 yard interception return for a score. The Crusaders will now face Cumberland Valley for their district championship.

Mike Lee - LB - Pittsburgh, PA (Woodland Hills) - Mike Lee had another touchdown catch at tight end in this playoff game as Woodland Hills also advanced to its district championship with a 10-0 win over Gateway. Should Woodland Hills and Bsihop McDevitt each win this week they will face each other in the class 4A state semifinals.

E.J. Johnson - DB - Cocoa, FL (Cocoa) - Cocoa had no trouble in a second meeting with Astronaut High during the second round of the Florida playoffs, winning 29-0. As usual, there is video with this one. Johnson had a fake punt that he took for a touchdown. Cocoa is now in the state semifinals. 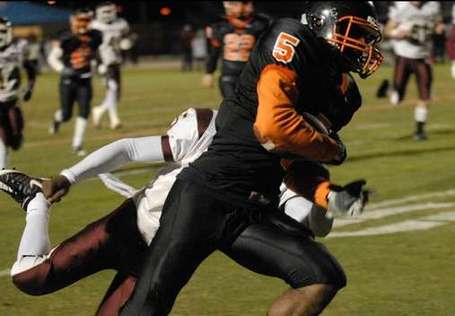 E.J. Johnson can be quite the playmaker.

Will Lucas - LB - Lakeland, FL (Lakeland) - Lakeland also advanced to their respective state semifinal with a dominant 30-14 win over Kissimmee Osceola. Lucas continues to leads the team with 102 tackles and five sacks.

Jesse Schmitt - LS - Louisville, KY (Trinity) - You would think that Trinity, being in the state's largest city, would get some kind of coverage for making the state finals in football. Unfortunately, that is not the case as this is all I could find.

O.J. Ross - WR - Daytona, FL (Mainland) - The Mainland trio, as they called, saw their season come to an end with a 26-0 loss to DeLand in the state quarterfinals. This was revenge for a 21-14 Mainland victory during the regular season. I couldn't find much about the actual game, but I did find this story about the recruits in the game.