Wake Up! Q&A with Wake Forest's Blogger So Dear

I'll have my full preview up later tonight, but here is my Q&A with the SBNation Wake Forest blog Blogger So Dear: 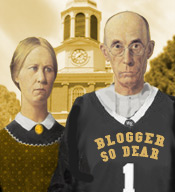 Not quite the BSD we're used to...

Hammer & Rails: How well has Wake Forest recovered after stumbling down the stretch last year?

Blogger So Dear: The Deacs are excited about the fresh start. Obviously last year left a bad taste in the team's mouth and there were some problems beneath the surface, but this year, the nucleus is more focused and overall it seems like, as you've indicated in the third question, the team is a lot more balanced as opposed to relying on two players (and a third freshman to pick up the slack). This year the guys seem to have really good chemistry thus far and will only gel more as the newcomers continue to settle into their roles.

H&R:  Al-Farouq Aminu is playing like a stud so far. Will this be the first true defensive test he will see?

BSD:  I believe so. Aminu hasn't played a real Big Ten team defense yet. That said, I don't know how many guys can stop him. He has really stepped up his ballhandling and shooting and he's extremely tough to guard because of his combination of playing down low and on the perimeter. I imagine he'll draw Hummel, and that certainly will be an interesting matchup. and one to focus on.

BSD:  I wouldn't say I'm confident about this game. This will really say a lot about what we have as a team because we're really not sure yet. Wake historically has not played very well on the road, but what gives me hope is how well our guards have been playing. This was a question coming in and I really believe Ish Smith has turned the corner, and CJ Harris (10.5 points, 2.0 assists, 1.8 rebounds) will have a solid year as a freshman. Our bigs have not really had a chance to be the primary offensive focus, and this game seems like it will be a good opportunity for them.

I think Wake's athleticism will at least keep them in the game and give them a chance to win as long as they: 1.) play solid perimeter defense, 2.) limit turnovers, 3.) shoot at least 33% from beyond the arc and shoot less than 15 threes and 4.) shoot at least 75% from the foul line.

H&R:  Do you see this as a swing game in this year's ACC/Big Ten challenge in terms of deciding the winner?

BSD:  You know, you could be right here. This is definitely the year that the Big Ten has the best chance of winning the challenge. The way I see it, here is how the matchups will go:

Penn State vs. Virginia--PSU
Maryland vs. Indiana--Maryland
Michigan State vs. UNC--tough one, but I will give UNC the edge since they are at the Dean Dome. Mich. State wins if they're in East Lansing.
Northwestern vs. NC State--push, but I've got a feeling NW wins this
Va Tech vs. Iowa--VT
BC vs. Michigan--Michigan
Duke vs. Wisconsin--Duke
Illinois vs. Clemson--Clemson
Minnesota vs. Miami--Minnesota

That puts the ACC at 5 and the Big Ten at 4 coming into our game. Obviously, with the two games I see going either way, this is going to be close. Wake-Purdue could definitely be the swing game.

H&R:  Both teams are heavily recruiting Indianapolis' Marquis Teague. Purdue has the home state advantage, both had teams had a relative play for them. Who wins his services?

BSD:  Teague is not coming to Wake. It just isn't happening. You guys have a great chance, but I see Louisville winning this.