Up Next: Central Michigan

Share All sharing options for: Up Next: Central Michigan

The key to stopping Central Michigan Saturday will be containing perhaps the best player in MAC history, Dan LeFevour...

Sorry about that. I guess over the past few years I am used to seeing Central Michigan on the schedule and thinking about Dan LeFevour. In a way, it may be a good thing we missed out on a bowl game. Otherwise we would possibly see him again in Detroit. This time the men's basketball team will be facing the Chippewas. They don't have The Clippers' Chris Kaman to help them now, so we'll exact some revenge after they eliminated our women's soccer team from the NCAA tournament. 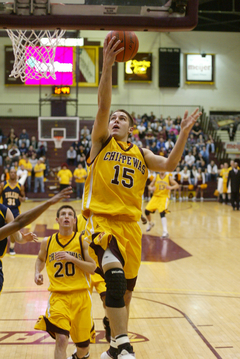 Jordan Bitzer is Central Michigan's #2 scorer at 14 points per game.

Blog Representation: The Central Word (More of a message board, but still solid)

I actually have a bad memory about Thanksgiving and the one loss we have had to Central in the series. It was early in my junior year and we played Central Michigan on the night before Thanksgiving break began. I attended the game, then left at halftime to get home to Kokomo because it looked like we had the game in hand. During the drive back the Chips made a furious comeback. Purdue led by one in the closing seconds and had the ball with the shot clock winding down. Central played good defense, forced a bad shot, and got a long rebound. The rebound started a 3-on-1 break the other way that led to an easy layup and a stunning 67-66 win for the Chippewas. I managed to catch this final play on TV just as I walked in the front door of my parents' house. The Chips have not visited Mackey Arena since, though we did play them at Conseco Fieldhouse in 2003. That game was a dominant 80-39 Boilermaker victory.

That game during the 2000-01 season was the harbinger of Gene Keady's downfall. Though we made the Elite 8 the season before, we would fall to the NIT that season. Keady would have just one more tournament.

This year's contest will likely fall more along the lines of that meeting in 2003. Purdue is currently ranked 6th in the nation, while Central Michigan has beaten Ferris State and Illinois-Chicago. The three losses have come to Princeton, Fairleigh Dickenson, and Wright State.

Central Michigan is a relatively deep team. They have a nine man rotation with two players averaging in double figures. 6'1" senior guard Robbie Harmon is the team's leading scorer at 16.4 points per game. He is a legitimate deep threat who has twice had a game this season where he made six 3-pointers. He accomplished this feat against Princeton and Illinois-Chicago, so we will need to make sure he doesn't get loose on the perimeter.

Fellow guard Jordan Bitzer is also a senior and is second in scoring at 14 points per game. He is currently shooting better than 50% from beyond the arc, hitting 13 of 22 attempts through five games. 6'8" forward Chris Kellermann is also a senior and he averages 9.6 points per game. He can also step outside and hit the three, but his shooting percentage from the field is under 35%.

Junior College transfer Jalin Thomas has been a promising addition through five games. He had a season high 16 in the win over Illinois-Chicago and is averaging nine points per game. Thomas also leads the team in rebounds at 7.4 per contest. 6'9" junior forward Marko Spica is the only other player averaging over seven points per game at 7.2. He is playing after missing all of last season due to injury.

The statistics fall off quite a bit outside of these top five. William McClure, Finis Craddock, Brandon Ford, and Tyler Brown provide depth, but they don't do much scoring.

Though Central Michigan is an experienced team, turnovers can be a bit of an issue. They average more than 14 per game while only dishing out 10 assists. They are a decent rebounding team, but it is more by committee than anything. We won't be overwhelmed with their size. They prefer to play out on the perimeter with only Jalin Thomas doing a lot of work inside.

The final factor to consider is that they are struggling this year without having played anyone even close to the talent level we have. Fairleigh Dickenson beat them for their only win in six games. Wright State is probably their best opponent. The Raiders could challenge Butler in the Horizon League.

Honestly, this is a game we should have little trouble in. Central Michigan is not one of the better teams in the MAC even though they are experienced. It is a bit of a trap game falling in between Tennessee and Wake Forest, but I don't think we'll be looking ahead. Matt Painter need to say one word: Wofford, if we start to look ahead. We must see this as another chance to get our freshmen like Patrick Bade and Kelsey Barlow some experience against live competition. Purdue 77, Central Michigan 57