Share All sharing options for: The Bucket Stays: A Bloomington Road Trip

As regular readers know, I love going to see Purdue on the road. Unfortunately, my road record is not the best. In fact, coming into today I had not seen Purdue win a game away from Ross-Ade Stadium since going to Illinois in 2006. Since then I have seen us lose at Hawaii, Michigan, Indiana, Michigan State, and Wisconsin. Like many other streaks this season, my five game road losing streak is now done. As always, we have the road trip diary, even though it was just an hour in the opposite direction.

A belated thank you to Purdue football broadcaster Joe McConnell. Joe called his final Purdue game today, retiring because of failing eyesight after being the voice of the Boilers for the better part of the last two decades. McConnell is a class act who helped grow this young Boilermaker's fandom while in high school. Thank you, Joe. You will be missed. 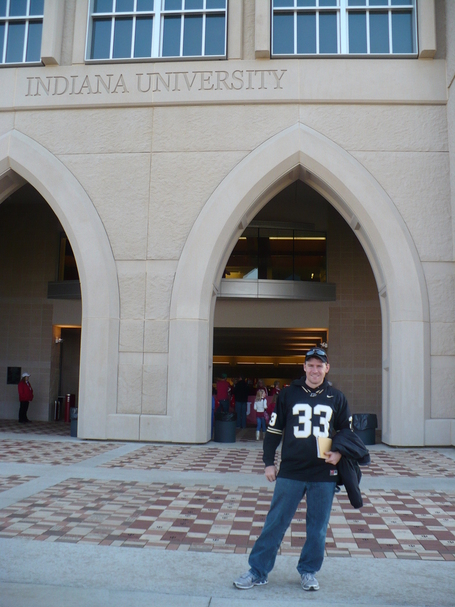 I am a pilgrim in an unholy land

12:09pm - Indianapolis - Instead of enjoying at least half of the Miami-Duke game before leaving, we're forced to leave now because of the notoriously bad Bloomington game day traffic. I hope we make kickoff. I text Chris Summers' dad (a former co-worker). He responds; "Traffic is already bad." Crap.

12:25pm - We decide to hit the Pita Pit in downtown Indy. Unfortunately, no quick off the street parking can be found. Not the best start to the journey, as I was craving a pita with teriyaki sauce.

1:39pm - Eschewing the clusterf*** that State road 37 becomes on game day, we decided to go towards Nashville, IN and make the turn to Bloomington in Beanblossom. Beanblossom is the home of Bluegrass legend Bill Monroe's Museum. There isn't much else there, but this town goes apeshit over him.

2:11pm - Though state road 45 is the curviest road in the state of Indiana, we avoid all the traffic and we are tucked behind the centerfield wall of IU's baseball stadium. I rule. For good measure, we're parked next to a fellow Boiler, meaning the giant Purdue tire cover on my Jeep has company.

2:14pm - Walking out onto 17th street we see the insanity confirmed. Once again, I rule. Time to look for tickets

2:24pm - Walking up to the stadium we have the completion of a joke made six years ago. When I took Mrs. T-Mill to Bloomington for the first time in 2003 I pointed to the stadium at the top of the hill. Her response: "Where's the rest of it?" As we see IU's new addition (very nice, by the way) we finally see the rest of it. 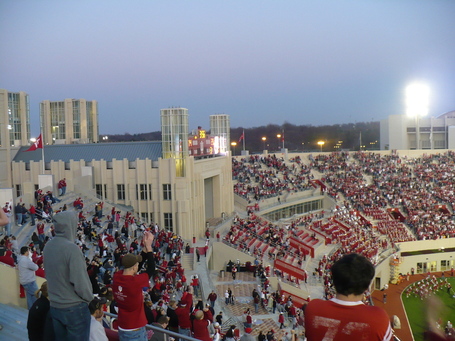 Nice of IU to finally finish their stadium.

2:57pm - This is becoming an odyssey. Each scalper is trying to charge $60 per ticket. We can walk over and buy them for $50 from the ticket office. one guy asked for all the cash we had. As Mrs. T-Mill said, "That's called a stick-up." Maybe it wasn't a good idea to have each of us wearing Purdue jerseys.

3:21pm - We resign ourselves to waiting until after kickoff for a better deal. This is especially true after some jackanapes, when we turned down $75 per ticket, said, "This is IU, we pay to get into games. I thought you were a good program." We have bathroom break at Assembly Hall. It is my first time entering the building. I feel dirty.

3:40pm - Success! Just as we're about to give up and walk back to the car we hear Jaycen Taylor's first TD. We also find a guy with two seats not together for $35 each. We grab his last two and hightail it to the stadium to sit in an empty corner. Patience is a virtue.

7:47 1st quarter - We're finally settled into the open seats in the Northwest corner of the stadium, just in time to see David Pender block a field goal attempt. He is one of many seniors that played very well today.

6:04 1st - Jaycen Taylor is officially playing like a man possessed.

5:04 1st - Dan Dierking finishes the drive with a nice catch, his first TD of the year. Boilers up 14-0 (first time I have seen a lead on the road since Hawaii). Is a blowout in order?

4:56 1st - Nope. Our piss poor kickoff coverage returns as my grandmother could have had the same length of return that Tandon Doss just had. 1. She died last September. 2. She got around in a motorized scooter the last five years of her life.

3:02 1st - It means nothing as the D forces a 3 and out. What follows is the ugliest punt sequence you will ever see. IU has a bad snap. Chris Hagerup bops it around against no rush before finally getting it off. It is partially blocked by a very late rush, Purdue touches downfield, but recovers. This is why both teams are 4-7.

12:30 2nd - The D holds, forces a field goal, which IU misses. Meanwhile, the four drunk IU students behind us have been obnoxious, stepped on Mrs. T-Mill's coat, derided their players by name, called West Lafayette a cesspool, and stated, "We need to come to games more often." This is all in the last 15 minutes. We were told Wisconsin had awful fans but they were great. Indiana actually stopped tailgating to show up and they were obnoxious. 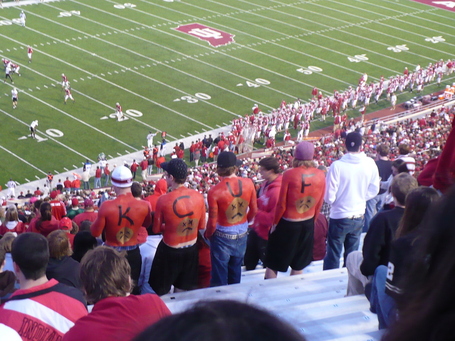 Spelling is a graduate level course at IU.

6:46 2nd - Easy pick by Torri Williams. It is awesome that he ended his career on a very high note.

2:03 2nd - Taylor keeps running hard. He sets up a nice TD pass to Jared Crank (his first). It should be noted that with this TD, Elliott threw his 22 touchdowns to eight different receivers this year. We're getting outgained in yardage, but we're up 21-0. Meanwhile, the IU jackasses behind us keep talking trash as we ignore them. I plan to just point to the scoreboard if they call me out.

1:58 2nd - The word GIBBONEY is written down as we give up a big return again. Most teams get better at coverage as the year goes on. We got worse. This is after being one of the best in the nation before he came. 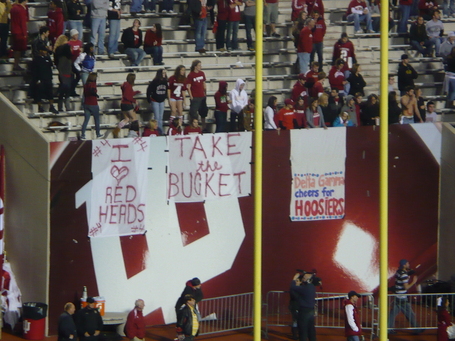 0:35 2nd - A coverage scramble leads to a near TD (called back on review) it sets up IU's first score. Stuff like this can't happen next year. At least we're up 21-7 despite getting outgained.

14:49 3rd - ATM! ATM! ATM! ATM! MONEY! MONEY! (Translation: I am very happy that Al-Terek McBurse just returned the 2nd half kickoff for a touchdown. These are my shouts as he runs.) After this, I say that if we're truly Purdue we give it right back to Doss.

13:23 3rd - A good three and out here. I continue to cross myself every time Aaron Valentin is back to return punts. As previously stated, I am not Catholic.

9:25 3rd - More drunk fans behind us keep saying, "IU Fuck Purdue." This is in addition to the dozens of Puck Furdue shirts we saw walking around. Again, this is a classy place.

4:28 3rd - Indiana shows that it has a hairy scrotum by going for it on 4th and five down three scores. It pays off with a TD to Mitchell Evans. The jackanapes behind me celebrate like IU just won the Big Ten. I feel like reminding them that 14 is a smaller number than 28. 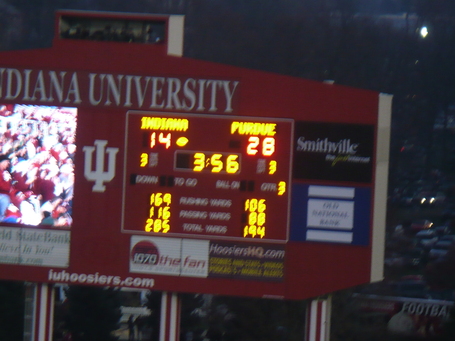 0:11 3rd - It looks even more in hand as we force a three and out again. Pete heads to the Bloomington Mall to have the new P engraved at Things Remembered.

Between 3rd and 4th quarter - Wisconsin has Jump Around, which is awesome. Purdue has Shout, which is okay. IU has John Mellancamp as the students sing Jack & Diane. No wonder they can't hold fourth quarter leads. This lulls them to sleep. Maybe they can recruit Jack because he was gonna be a football star. It might help.

13:34 4th - Savvy move here. We put in Frank the Tank Halliburton to punish them for a few plays. He has some nice runs, but it only leads to a missed field goal. At least we took 5 minutes off the clock.

9:47 4th - In the timeout after the missed field goal we have trivia FAIL. They ask, "What was the year the Bucket was first awarded?" The correct answer, 1925, isn't even a choice. They say 1930. For the record, that is the first year IU won it.

8:04 4th - Demarlo Belcher touchdown. My butthole officially tightened. An IU basketball commercial follows. I loudly comment that it is nice they are deciding to field a team this year.

6:59 4th - Three and out. We didn't even take a minute off the clock. The stadium is alive again.

6:09 4th - Kawann Short finds the plug with a huge interception. When is the last time we had a defensive tackle with two interceptions on the year?

4:07 4th - Elliott is sacked. It is a good sack, as we take 2:05 off the clock, move field position, and force them to use a timeout. Summers' final punt is a good one downed inside the ten. Thank you, Chris!

3:46 4th - Belcher makes a circus catch, but is ruled out of bounds on the review. That is why these officials are great! The girlies behind us, who have no concept of football, shout advice like "Throw the Hail Mary!" and "get an interception" (even when we run the ball). They are swearing like sailors against Purdue with little to no knowledge of the game. The students from India in front of us know more.

2:14 4th - After IU uses its last two timeouts to set up 3rd and long and have one final chance Keith Smith breaks a big TD. He basically says, "Oh you want this ball back? Well, I am done with it now. You can have it." 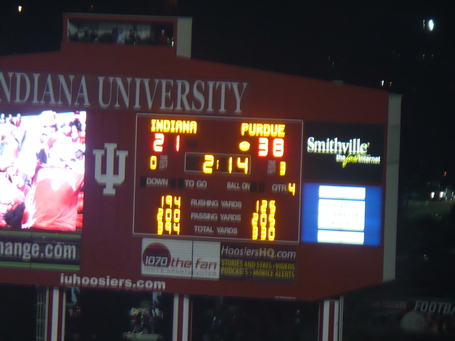 0:00 4th - The Bucket stays where it belongs. The one day it is seen in Bloomington every two years is over.

I know I will have a more complete entry to wrap up the season, but this was a great dominating effort today. The senior class was outstanding. Boilerdowd texted me during the game and said Mike Neal was playing like it was his last game. He might have broken a hand, but he came back. He and Kawann Short had a dominating day in the middle. Pender had a blocked field goal. Elliott went over 3,000 yards. Chris Summers averaged over 46 yards per punt. Jaycen Taylor went out with maybe the best game of his career. Torri Williams had a pick. This game was for the seniors, and they came ready to play.

I don't think I have loved a group of seniors more than this one. They went out with a 5-7 record. They didn't go to a bowl game their last two years, but they have instilled an attitude of never quitting. They could have rolled over and died at 1-5 with Ohio State coming to town, but they didn't. If there is a group that ever deserved the Bucket, it is them. I will miss them.

On the other side of the coin, we got key contributions from some guys that will be here awhile. Kawann Short (redshirt freshman) had a fumble recovery and an interception. ATM (true freshman) had his huge kick return that looked easy. Keith Smith will be back. Jeff Lindsay and Kyle Adams will be back. Jared Crank threw some nice blocks and got his first career touchdown. All three linebackers had a good game and will be back.

The future is bright for Purdue. Next year will not be a bowl-less season as we have a lot to look forward to.

Our trip to Notre Dame is on September 4th. I am so excited I am considering a lift of my vow to never go there. 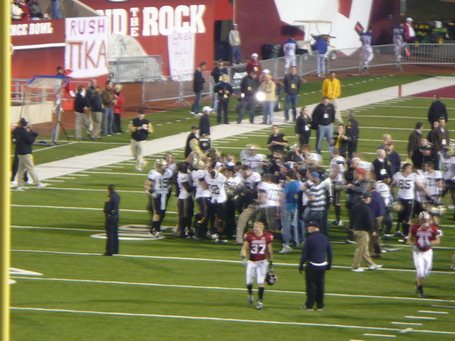 The Bucket makes a rare appearance in Bloomington.