This is why I love blogging.

When I was watching the World Series the other night, Fox interviewed Cliff Lee after his masterful game one performance. They asked him about what the Phillies thought because, though they were the defending champs, many people were already giving this series to the Yankees. Lee went on to say the usual bland answer of, "Well, we believe in ourselves as a team and blah, blah, blah..." This quote would have impressed me more:

"The last time I checked, we're the defending champs and we're not letting go until you pry it from our cold, dead hands."

The reason I love blogging is that I can say things like that. I know last year at one time I ripped Purdue's women's team for losing to Valparaiso. There was none of this," well Valapariso is a good team and yada, yada, yada..." No. We had no business losing to a team like that and it needed to be said.

That is why I am going to have some fun with this entry. When it comes to the individual team previews close to game time I will return to my fair and balanced statistical analysis. This time, however, it is time for the third and final installment of the overall basketball season preview: a look at the schedule with wins and losses predicted. Remember, these are off the cuff, first impression predictions. 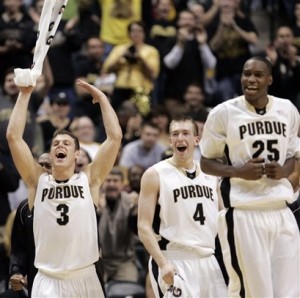 Our Time is Now

11/13 vs. Call State Northridge - W - This is the first of the, "there is no excuse to lose this one" games. The Matadors were an NCAA tournament team a year ago. They lost virtually all of their scoring from a 15 seed. We're playing at home, tipping off the most anticipated basketball season in decades. If we're truly the #7 team in the country that equates to being a 2 seed. Therefore, we need to do what 2 seeds do to 15's.

11/20 vs. South Dakota State (U.S. Virgin Islands Paradise Jam) - W - Another game that should be a win no matter what. The Jackrabbits are a lower tier Summit League team. Those teams do not win games against the top 10. It has the potential to be the biggest blowout of the year.

11/22 vs. Boston College or St. Joseph's (U.S. Virgin Islands Paradise Jam) - W,W - Assuming we play the Eagles in game two of the tournament it will be our first true test of the season. They were our best non-conference victory last year in a 7-point victory that came at Madison Square Garden. They are now a year older and more experienced too. They have enough talent that this is not a mortal lock for a victory on a neutral floor. St. Joseph's was 17-15 last year, but did not get invited to any postseason tournament. That is saying something when Oregon State was 13-17, yet was invited to (and won) the College Basketball Invitational. Expect a tight game here against a pretty good Boston College team.

11/23 vs. DePaul, Northern Iowa, East Carolina, or Tennessee (U.S. Virgin Islands Paradise Jam) - W, W, W, W - Of these four teams I think first Tennessee, then Northern Iowa is likely to meet us in the final. I think both will win their first round games, meaning we would have to lose to SDSU to play DePaul or East Carolina. That won't happen. Northern Iowa fought us hard in the first round of last year's NCAA's, but their two best players in Adam Koch and Jordan Eglseder are gone. Tennessee is probably the favorite to make it to the final, and playing them will be easier than Boston College. Sorry SEC, but you suck at basketball unless you are Kentucky (historically) or Florida (more recently). Both of those programs were down last year. I think I would fear the Tennessee women's program more. And yes, I know they are ranked 11th. I don't care. 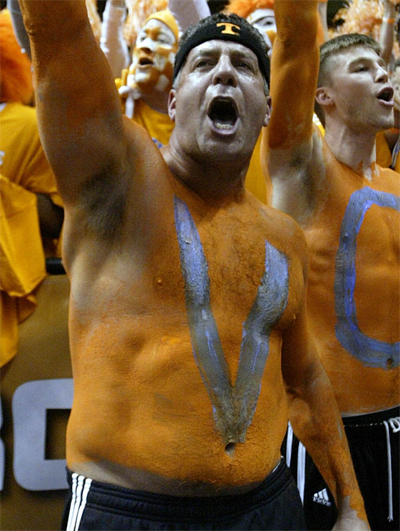 We're supposed to take this seriously? Would Matt Painter ever do this?

11/28 vs. Central Michigan - W - A 12-19 MAC has no chance of beating us in Mackey Arena unless we are bored or disinterested. Maybe Dan LeFevour  will play and make it a game.

12/1 vs. Wake Forest - W - This is another test against a solid ACC team. Wake is always dangerous in the first half of the season, so we had best be careful. They usually don't fall apart until midway through the ACC season. I give you last year as an example. They started 16-0 and were ranked number one. They lost to Virginia Tech at home, dropped four of their following eight games, then got drilled in round one by... Cleveland State. I know the Vikings are a good team, but that was embarrassing for all major conference basketball teams.

12/5 vs. Buffalo - W - Though this kind of is our Wooden opponent since we moved Ball State to the game at Conseco, the Bulls are a better team. They were 21-12 last year and won the MAC regular season title. We still should win, but it will be closer than people think.

12/9 vs. Valparaiso - W - Mmmmmm, cupcakes. See the same explanation for Central Michigan. I will be excited to see how former Kokomo Wildkat Brandon Wood performs in his closest game to home.

12/12 at Alabama - W - If Alabama is worth anything they will be undefeated prior to this game. They play absolutely no one. We, however, will be battle tested already. This is either a trap game or one in which we exert our will.

12/19 vs. Ball State (Conseco Fieldhouse) - W - I admit, this is not the best game for the Wooden Tradition. We handled Ball State last year at Ball State and two years ago at Mackey. They are getting better, but they are not on the level where they can compete with top 10 teams yet.

12/22 vs. Southern Illinois-Edwardsville - W - Here is how major college basketball teams rank opponents on their level of worry based on name alone:

City U. (or College)

12/29 at Iowa - W - There shouldn't be an 0-2 conference start this year. Not when we play the consensus worst team in the league to start. Road wins will be difficult in conference play this year. We have to get this easy one.

1/1 vs. West Virginia - W - They are #9 in the preseason poll, so all eyes will be on this one. Another key factor to remember here is that this is a Christmas break game. That means no Paint Crew. You hear me alumni? You had better step up and make Mackey loud on your own. If you don't want to cheer, don't come. Since this is a Big East team Digger will automatically pick the Mountaineers by 25. Since it is New Year's Day we might steal some headlines from the college football world too. This game got a little more interesting as incoming forward Deniz Kilicli was recently suspended for 20 games, including this one. 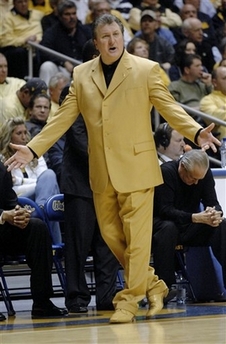 And you thought Bruce Pearl was poorly dressed.

1/5 vs. Minnesota - W - Just a tough first home game in conference play. I expect every game in the conference this year short of Iowa to be a war. The team that defends its home courts best will win the conference.

1/9 at Wisconsin - W - Can we do the unthinkable and win three straight at the Kohl Center? No Joe Krabbenhoft says yes.

1/12 vs. Ohio State - W - Playing them at Mackey gives me tons of confidence. We took two of three from them last year, dominating the second half in both wins. I like it even better if Robbie is healthy.

1/16 at Northwestern - L - I know what you're thinking. I haven't lost my mind. We could potentially be the #1 team in the country and lose to Northwestern. Think about it though. Basketball is about matchups. Northwestern is a HORRIBLE matchup for us. We didn't handle their trap in either game last year and would have been swept had they not choked the game away in Evanston. Their style of play negates all of our advantages because they want to extend every possession and they play all the passing lanes to disrupt offensive flow. That kills us at both ends of the floor.

1/19 at Illinois - W - This is a dangerous team, but I think we grit one out in Champaign after getting humbled a bit in Evanston.

1/23 vs. Michigan - W - It is all about defending the home court for this game and the next one. That is what the entire Big Ten season will come down to. Did you defend your home court?

1/28 vs. Wisconsin - W - Maybe one of the easier home wins, but that does not mean it is an easy one. Just easier.

2/4 at Indiana - W - If we don't win at Indiana this year it will be awhile before we do it again. They will be better, but they are still too young to be taken seriously.

2/9 at Michigan State - L - I am just fine with a split, Mr. Sparty. Let's just do that and decide everything in Indianapolis first at Conseco, then at Lucas Oil. Deal?

2/17 at Ohio State - W - What is the only Big Ten basketball venue that Purdue has never won in? Value City Arena on the campus of Ohio State. We're due.

2/24 at Minnesota - L - I don't like this game and we're due for a late season stumble. The questions will arise, just before we get home and get ready for a tournament roll.

2/27-28 vs. Michigan State - W - I expect this game to decide the Big Ten regular season title. Anything less would be a shock. I have us with three losses at this point. I think someone will get MSU a couple of times before this game, so they won't be unbeaten in conference.

3/2-3-4 vs. Indiana - W - If we control our own destiny in the Big Ten there is no <expletive deleted> we lose to Indiana on Senior day.

3/6-7 at Penn State - W - If we control our own destiny in the Big Ten there is no <expletive deleted> we lose to Penn State. Not when we lost a close game playing with a six man team there last year (no Kramer or Hummel).

So yeah, I have us going 27-3 and winning at least a share of the Big Ten with a 15-3 conference record. It is a good thing we do not have to go to Michigan. Playing a horrible matchup for us like Northwestern once is also very good. Michigan State has the bad luck of getting Indiana (generally only better than Iowa) just once and they must go to Bloomington for that game. Their other one play team is Ohio State.

What do you readers think? Other predictions?