The 2009 Bucket Game: A preview of something more?

Share All sharing options for: The 2009 Bucket Game: A preview of something more?

The records paint a familiar story. Purdue and Indiana both come into this season's Bucket game with losing records. Both teams are already eliminated from bowl contention. While this was also the case in 2005 and 2008, this one in particular feels like a throwback to the mid-90's when neither team was very good. A case could be made that 2005 would have been different if the current 12 game schedule had been in effect. Purdue likely would have scheduled a 1-AA or MAC opponent, grabbed another win, and would have been 5-6 playing for a bowl instead of 4-6 and done under that last 11 game year. In 2008, however, both teams took a huge step back after just the second season in which both Indiana and Purdue went bowling. Indiana was downright awful. Purdue suffered injuries to its top two quarterbacks and wasn't much better even when they did play.

The Bucket Game itself has rarely meant much nationally. Only in 1979 and 2007 did both teams go to a bowl game. In 1967 it decided the Big Ten title when the Hoosiers beat an undefeated (in Big Ten play) Purdue team to go to Pasadena for their only visit. A Purdue win might have meant a National Championship for the boilers, though a non-conference loss to Oregon State had knocked them from #1 earlier.

2009 feels different though. Both teams are 4-7 going into Saturday's contest. As John from Crimson Quarry stated yesterday, it is just the eighth time both teams have carried identical records into the season-ending game. It feels different because both teams could have identical records, yet be playing for so much more. With just slight improvement in a few areas, Saturday's game could be setting the table for a much better 2010 season on both sides. 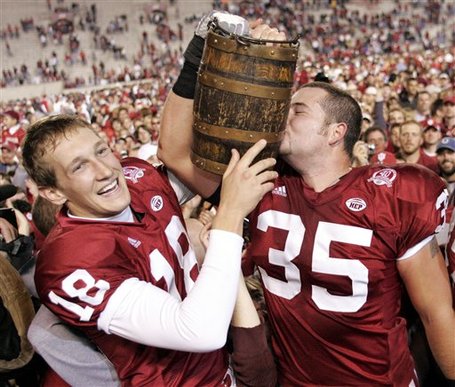 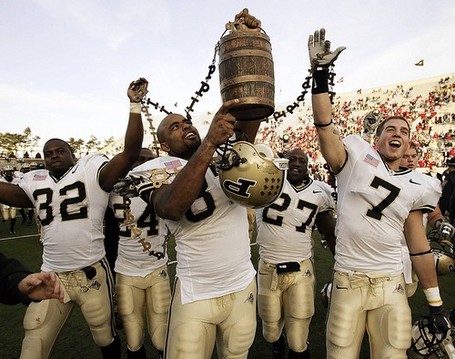 Someday these scenes may mean more outside the state of Indiana.

Purdue has beaten Toledo, Illinois, Ohio State, and Michigan. Indiana has beaten Eastern Kentucky, Western Michigan (a Toledo clone), Akron, and Illinois. The Wolverines and Buckeyes are hardly on the same level as Akron and Eastern Kentucky, but the Toledo and Illinois wins are similar. The losses paint an even closer picture. Indiana got blown out at Virginia in a game it probably should have won. While Purdue didn't get blown out, the Northern Illinois loss was similar, while the actual Wisconsin game was a similar blowout. Both teams had Northwestern beat and blew it. Indiana's implosion at Iowa was like Purdue's at Minnesota. Indiana outplayed Michigan only to lose in Ann Arbor much like how Purdue outplayed Oregon in Eugene. Indiana's Wisconsin loss is a lot like Purdue's Michigan State loss in that the teams traded blows until one finally was left standing.

Among the four teams not going to bowls this year, I think Purdue and Indiana each have the best hopes of making the jump next season. Michigan is a wild card that may still take another year to come around. Illinois is, well, Illinois. In a conference that has been south of mediocre, however, Purdue and Indiana have each shown enough improvement to be encouraged for next year. It will begin with the non-conference season, as both teams have realistic shots at going 4-0 next year. Purdue has no excuse not to be 3-1 after a disastrous 1-3 this year. We should never lose games to the likes of Toledo, Ball State, and Western Illinois. Notre Dame could be in a total rebuild. If they are, the opener in South Bend has to be a win. Indiana has an even easier non-conference schedule against 1-AA Towson, at Central Michigan (without Dan LeFevour), at winless Western Kentucky, and at home against a bad Akron team. Again, there is no reason to not be at least 3-1 against that record, and 4-0 is more likely.

Once you get to the Big Ten there is more than enough room to get at least four wins. Both teams play Illinois, who might take a step back with Juice Williams graduating and Rejus Benn thinking of pro ball. Northwestern is not going to be significantly better. Michigan is going to be a question mark for at least another year. If anything, Purdue catches more of a break as they face Minnesota and Michigan State, who will be worse than Iowa and Penn State. Wisconsin and Ohio State will be tough games for both, especially since the Badgers only come to West Lafayette.

Both teams want this as momentum going into next year. There is enough talent returning on offense that each team can legitimately think about eight win seasons next year. Purdue has a wild card in Robert Marve, who does have 10 starts under his belt. he'll definitely be helped by having a 1,000 receiver come back in Keith Smith as well as a 1,000 rusher in Ralph Bolden. That is why this is an important preview game for both teams. Purdue wants to show that even in a rebuilding year it is still better than Indiana. If there is one thing Tiller did consistently it was keep the Bucket in West Lafayette. His 10-2 record against IU featured a series of blowouts. The only two losses were to the two best Indiana teams in that time by nine total points. Tiller had wins of 62-10, 63-24, 52-7, and 56-7 in there. Danny Hope wants to show he can keep that trend going.

Indiana wants to show they have turned around from a 52 point blowout. The Hoosiers surprised me this year by being much more competitive than originally thought. If they get the Bucket they will gain momentum that was lost in a disastrous 2008 season. They also want to show they can close a game after blowing so many late leads this year. Both teams have overachieved from preseason expectations. The winner will have a leg up on the "Team That Could Surprise in 2010" category, which is rarified air for IU's program.