Welcome to the Fold: Michael Eargle

Share All sharing options for: Welcome to the Fold: Michael Eargle

This is the last week we will have everyone in our secondary. David Pender, Bandon King, Dwight McLean, and Torri Williams will all finish their Purdue careers Saturday evening, so that opens the door for competition next year. That competition just got a little stiffer with today's edition of JuCo transfer Michael Eargle.

Eargle is roughly my size at 6' 165. He comes from the same community college that gave us Keith Carlos this season. Hopefully one of his classes facebook communication and how to demand the ball. Then again, if he demands the ball and he is more sure handed than Carlos it could mean a lot of interceptions. He also has good speed reported at 4.4. I did manage to find his original Rivals profile out of high school from Elizabeth, New Jersey and his speed numbers were not quite the same.

I can see him contributing on the same level as Terrell Vinson did two years ago. Vinson was another JuCo transfer that had a great season in 2007 before getting abused in the Motor City Bowl. He was originally an Oklahoma State signee last season before an academic issue sent him to junior college for a year. Auburn also showed some interest recently.

His JuCo credentials are quite impressive. He was named the 2008 MVP of a Lackawanna team that played in the National Junior College championship game. According to the following he actually played some quarterback for Lackawanna, so he is a naturally gifted athlete. Contrary to what Google tells us, his nickname is not Black Lavender, though we should start calling him that because it is an awesome nickname. 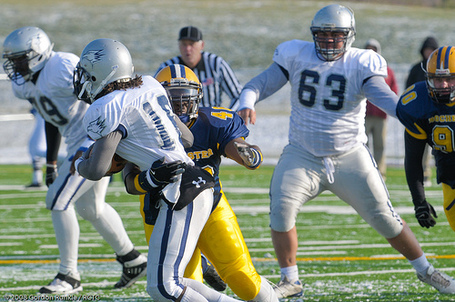 This is a good pickup for us because we are going to need some experience in the secondary. Right now Charlton Williams at cornerback is the only other player with significant game experience. Josh Johnson should also compete for time after playing some nickel packages and special teams this year. At safety, Albert Evans is expected to step in after some spot duty this year and more special teams time. I ran into Albert at the Black & Gold Mine after Saturday's game and he is a legit 6'2" or 6'3", so it is nice to have a big safety back there.

The rest of the unit will be very green. I tend to like E.J. Johnson from this year's recruiting classes because he is an interception machine. Jhonny Faustin looks to be a very good player who can play immediately. We can't forget about Ricardo Allen from the Mainland trio. Still, this is a very young group that needs some veteran leadership. Eargle can fill that role.