When I saw this game on the schedule I felt it was the biggest toss-up of the year. I expected to be teetering on the edge of bowl eligibility at this point (certainly without wins over Ohio State and Michigan) but I didn't know what to think of the Spartans. Being game 11, it was hard to predict how seasons would turn out on both sides. I felt confidence about beating Indiana, but I have virtually ignored Michigan State for multiple reasons. First, the game felt far off. Second, it later felt like the game would not matter. Now that it is here, I still don't know what to think.

I am really surprised that this is the best offense in the Big Ten. I am more surprised that their defense has been so bad. Like Ben and I discussed in the podcast last night, just about the opposite was expected from the Spartans. The defense has been pretty good at home, but has struggled mightily on the road. As Ben said though, they have faced better offenses (Notre Dame, Wisconsin, Minnesota) on the road than at home (Western Michigan, Montana State, Michigan).

In short this is a huge game for both teams, though we have less of a margin for error (none) than Michigan State.

Blog Representation: The Only Colors, The Enlightened Spartan, Sparty MSU 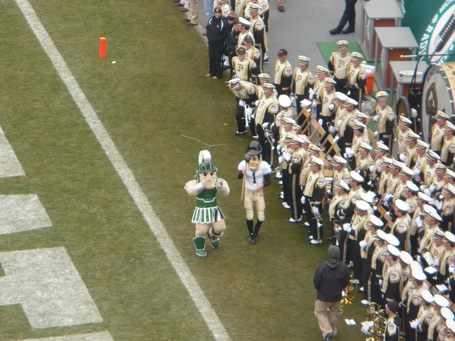 This is really the best offense statistically in the Big Ten? I guess you're right. Michigan is flaky. Ohio State wins with defense, as does Iowa Most of the time. Minnesota has had one great offensive game against Michigan State. Indiana is surprisingly good. Illinois has only been good for two weeks. Northwestern is opportunistic. Purdue moves the ball, but we give it away almost as much as we score. Penn State can't score against good teams. Wisconsin is afraid to pass. That leaves Michigan State.

The Spartans don't have a dominant running back like Javon Ringer any more, but their running game is surprisingly balanced. No one has run for more than 400 yards, but seven players have at least 100 yards rushing (compared to three such players for us). Leading rusher Larry Coyer (375 yard, 6 TD's) is a question mark after suffering a concussion a few weeks ago, but Ashton Leggett (110-4) took over the position with authority last week by running for 110 yards and 4 TD's on 14 carries. He had one carry for 0 yards previously, and that came in the season opener against Montana State. Edwin Baker (242-0) also had his best game of the season last week with 15 carries for 78 yards. 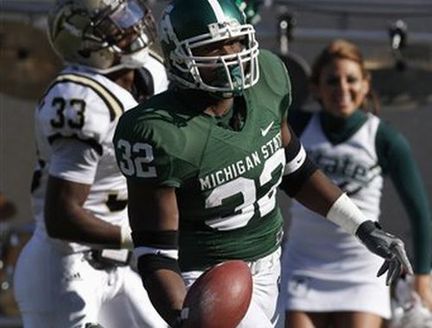 Ashton Leggett had a breakout game against Western Michigan

At quarterback we will see both kirk Cousins and Keith Nichol. Thoughts on that issue are best summed up here by the Michigan State faithful. Cousins (158-148, 14 TD, 5 INT, 2,097 yards) has been by far the better quarterback, but Mark Dantonio insists on getting Nichol (45-86, 6 TD, 3 INT, 680 yards) some work in each game. The duo has combined to be the best passing attack in the league, so our secondary will be tested. Expect Cousins to start and Nichol to play.

Nichol and Cousins like to spread the ball around, though there is one top receiver to focus on. Blair White (58-836-7) will remind Purdue fans a lot of Chris Daniels. He is one of the conference's top receivers and will be the number one option on many plays. B.J. Cunningham (41-510-3) is a solid second option as Michigan State will likely look to pass first. Tight end Brian Linthicum (18-259-2) gives each quarterback a reliable safety valve and goal line option. Keshawn Martin (12-251-3) is a speedy deep threat. He has a 91 yard score on his resume this season. Mark Dell (25-392-1) can also be a deep option.

The reason that Michgian State's passing game has been so successful is its offensive line. The Spartans have given up just 12 sacks on the year, but they have yet to see a pass rush as fierce as ours. I fear another Wisconsin game because Michigan State has a big, experienced offensive line. Seniors Brendon Moss, Joel Nitchman, and Rocco Cironi form the core, but juniors Joel Foreman and D.J. Young are hardly stiffs. This is not a tall line, but they are compact and strong. We must respond tot heir physicality better than we did against Wisconsin.

While our defense may struggle to slow down their very good passing game, our own passing game should have plenty of room to move as long as we can avoid turnovers. Michigan State defends the run well, giving up barely more than 100 yards per game. They are giving up over 230 yards per game through the air with a whopping 22 touchdowns. Ball security could be even more of an issue. Michigan State has forced only 11 turnovers this season, so it is critical that we don't help them out with dumb turnovers like we have helped other teams all year long.

The run defense begins with one of the best linebackers in the Big Ten, if not the entire country. Greg Jones is a beast of a player in the middle. He already has 117 tackles (11 for loss) 7.5 sacks, and a fumble recovery. He loves to get after the quarterback, and you can bet he will end up wherever the ball is. Fellow linebackers Brandon Denson (54 tackles) and Eric Gordon (70 tackles) help him out. All three are the top tacklers for Michigan State.

Michigan State starts a pair of senior defensive ends in Trevor Anderson (4 sacks) and Colin Neely (2 sacks). Tackles Jerel Worthy and Oren Wilson are stout against the run, while Worthy can get into the backfield with 4.5 sacks. Wilson is a big nose tackle that will be difficult to get around in the middle of the line, but we mostly run outside anyway.

The Spartan secondary can be exploited. Corners Chris Rucker and Jeremy Ware have been disappointing this year. Each has just one interception, but more than 40 tackles. Marcus Hyde and Dan Fortener have played every game at the safety spots, but have only one interception between them. We should have some room to move in the passing game since coverage is not their strong suit.

Aaron Bates is one of the league's better punters at 42 yards per kick. Teams are averaging 8 yards per return against him, but we seem to be employing a strategy of catching the ball then falling down of late, so it doesn't matter. Michigan State is giving up 22 yards per kick return, so ATM might have some room.

Brett Swinson is one of the best kickers in the Big Ten. He has hit on 14 of 16 field goal with a long of 45. he did miss his only attempt last week from 37, so he isn't automatic. Keshawn Martin is a dangerous kick returner who has already taken one back for a score. He also returns punts, so our coverage must be better than last week.

Purdue clearly needs this more. We're on a roll (if you remove the Wisconsin game) and playing at home with a senior class that has overachieved this year. Michigan State can afford a loss, while we cannot. They at least have the fallback of a second chance at home next week. We do not.

Michigan State has also performed poorly on the road this year. They grabbed a win at Illinois when Illinois was terrible, but it was only a hard fought 10 point victory. They gave up a ton of points to Notre Dame, Wisconsin, and Minnesota in their other road trips. I am really surprised that their defense has underperformed this season. It was supposed to be a strength while the offense replaced Brian Hoyer and Jevon Ringer. Instead, the offense has been fine while the defense has given up a ton of yards through the air.

Defensively, we want to make Michigan State run the ball. They do not have a strong running game, and many of its numbers are inflated by last week and the opener against Montana State. They have had the luxury of two laughers there, while we have had about half of one against Toledo. If our secondary can keep the passing game in check I have confidence the run defense will come around. Michigan and Wisconsin have gashed us the last two weeks, but they are much better running teams than the Spartans. Of course, Illinois was a bad running team too.

Offensively, if we can establish some balance with Ralph Bolden I think we will do very well. If we somehow get him to 100 yards I do not see us losing because the passing game will have plenty of time to work.