It begins Friday night. I know we just had the truncated exhibition season, but what can you really learn from those games? The veterans played just enough know they are ready and the new freshmen were getting their feet wet. D.J. Byrd looks ready. Patrick Bade may not be ready, but we need him to be. Ryne Smith is a shooter and an asset. We'll have to wait on Sandi Marcius, but we need him too. No matter though. The games count in about 48 hours.

Some housekeeping issues first before looking at the Matadors. First, a friend of mine can't make Friday's game, so if anyone is looking for tickets feel free to e-mail me at the new blog e-mail address: tmill99@gmail.com (I still check the Excite, but it is causing issues with my computer so I am changing.) Second, an official welcome goes out to Anthony Johnson, Terone Johnson, Travis Carroll, and Donnie Hale. They signed their letters of intent to become Boilermakers today. I haven't spoken much about them except to say this: I think they are the perfect compliments to this team next year if everyone stays, and should that happen I expect to win the 2011 National championship. Welcome aboard, gentlemen. Third, now is the perfect time to buy a Defense Lives Here shirt for the season. 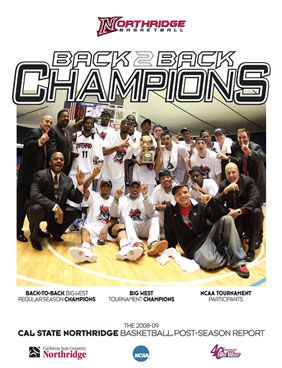 Northridge made just its second NCAA Tournament appearance last season and first since 2001. If it wasn't for a 35 point explosion from Memphis' Roburt Sallie they might have had the upset of the tournament. The Matadors held a 6-point lead with 10 minutes to go before fading late. It was a banner season for Northridge despite losing two key players midway through the season.

Nine lettermen return from last year's team, but they lost five of their top six scorers. So this could be a potentially dangerous opener if we're not paying attention. These guys didn't show any fear in taking on a two seed last year. With our current ranking we would theoretically be a two seed as well. Three of the returning players were starters, led by 6'8" Center Willie Galick. Galick averaged a modest 9.3 points per game and 5.5 rebounds. He has the potential to be a double-double machine for the Matadors.

6'4" Forward Kenny Daniels (8.9ppg, 3.7 rpg) and 5'11" guard Mark Hill (8.2 ppg, 2.9 apg) are the other two returning starters. Galick, Daniels, and Hill are all seniors with NCAA Tournament experience, so we will be facing a team that knows what it is doing. Daniels had 16 points in Northridge's exhibition win over the Master's College, while Galick had 19 in the other exhibition win over Cal Lutheran.

A new starter to watch is 6'7" junior forward Lenny Daniel. He is a first year JuCo transfer from Coffeyville Community College and he led the Matadors in scoring by averaging 18.5 points over the two exhibition games. His addition gives the Matadors a formidable starting frontcourt with loads of experience. He is a decent rebounder, so it will be important to keep them off the offensive glass to avoid cheap second chance points.

Kevin Menner and Rashaun Mclemore are also promising JuCo transfers that will be seeing their first Division 1 action against Purdue. Menner and McLemore had 12 and 10 points respectively against Cal Lutheran, while Menner had 10 against the Master's College. Senior forward Tony Osunsanmi is also expected to be a solid bench contributor in the rebounding department.

In looking at the statistics through a pair of exhibition games I can see that Northridge wants to work the ball inside. They were just 4 of 19 from beyond the 3-point line as a team. The paint Crew needs to warm up the Defense Lives Here sign (any buy corresponding shirts from me), as Cal State Northridge averaged 21.5 turnovers against the two exhibition foes. I somehow doubt that The Master's College and Cal Lutheran play with the same defensive intensity as us. Northridge is also not a strong free throw shooting team. They hit 26 of 42 against The Master's College and 16 of 27 against Cal Lutheran.

We're the #7 team in the nation. This is our home opener against a team that, while it was in the NCAA Tournament last year, they are rebuilding with talent that hasn't played much at the Division 1 level. Their best win last season was probably over pacific int eh Big West championship game after the Tigers took both regular season meetings. In short, we should have no trouble against them. We should only be worried if their frontcourt is outrebounding us and creating second chance opportunities on the offensive glass. They are a strong rebounding team, and that has been a concern for us for some time. Otherwise, we need to just turn up the defensive pressure, force turnovers, and hit our shots.