Share All sharing options for: Welcome to the Fold: Tracking Edition week 11

Except for our Florida guys, most of the regular seasons are now over for our incoming recruits. Players like Sean Robinson and De'Ron Flood began their playoff quests this week over in Illinois. Everyone has to be encouraged in regards to immediate playing time after Saturday's debacle in Madison. While I am sure some of these guys will play next year (Faustin and E.J. Johnson are at the top of my list), most will likely redshirt.

Sean Robinson - QB - Rochester, IL (Rochester) - Rochester survived an early scare as the #1 seed in the Illinois Class 4A playoffs, beating Mascoutah 57-32. The Rockets were only up 22-19 after one period, but settled down for a comfortable win. Robinson ran 13 times for 91 yards, hit on 10 of 12 passing for 174 yards, and had one touchdown passing. He also threw, to my knowledge, his first interception of the season. It was returned for a score. Rochest will play Mt. Carmel in round 2, which is an interesting game because Mt. Carmel actually plays in a conference with all Indiana schools. They somehow qualified for the Illinois state tournament despite playing three games against Illinois schools and six against Indiana schools.

Charles Torwudzo - WR - Brownsburg, IN (Brownsburg) - As I mentioned in the Madison road trip entry, Brownsburg avenged a 7-0 regular season loss with a 20-14 win over Zionsville in the second round of sectional play. Chuck T had just one catch for six yards in the rain, but it was for a big touchdown. Brownsburg will play Avon Froday for their first sectional crown since 1985. Brownsburg won the regular season meeting 21-17 at Avon, and this game will also be at Avon.

Jeremy Cornelius - WR - Harrisburg, PA (Bishop McDevitt) - Bishop McDevitt finished its regular season with a perfect 9-0 with a 28-17 win over State College on the road. Penn Live, which has been wonderful on keeping his stats, did not post stats for this game.

De'Ron Flood - TE - O'Fallon, IL (O'Fallon) - Flood and O'Fallon won their first round playoff game against Lincoln-Way Central 16-0. I couldn't find any stats for Flood, but I did find a nice picture of a one-handed catch he made. O'Fallon will play Lincoln-way East in round 2. 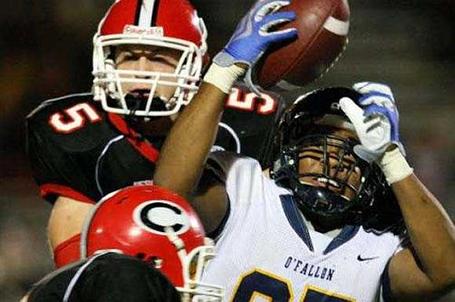 Let's face it, we need depth at the tight end position, as we're getting little to nothing there.

Josh Davis - DT - Plain City, OH (Jonathan Alder) - Alder is officially on a roll. The Pioneers beat St. Charles 21-10 this week for their sixth straight win after starting the season 0-3. They will open tournament play against Archbishop Alter this week.

Ryan Isaac - DE - Michigan City, IN (Michigan City) - Season over: Unlike Gilliam, there is no final stats site.

E.J. Johnson - DB - Cocoa, FL (Cocoa) - Johnson is part of one of the best high school defenses in all of Florida. The Tigers have given up 3 points in their last four games combined, winning 52-0 over local rival Cocoa Beach this week. As usual, there are video highlights with this link. Johnson had a 39 yard TD catch on offense.

Will Lucas - LB - Lakeland, FL (Lakeland) - It seems odd, but Lakeland was challenged by Pembroke Pines Flangan this week. The Dreadnaughts were tied at halftime, but pulled away for a 44-22 win Friday. Lucas continues to lead the team in tackles and sacks.

Jhony Faustin - DB - Naples, FL (Lely) - Lely kept things going with a 21-0 victory over Palmetto Ridge, moving them to 6-3. Ion the included video Faustin has a nice catch in traffic. His #22 is seen on quite a few defensive plays too. 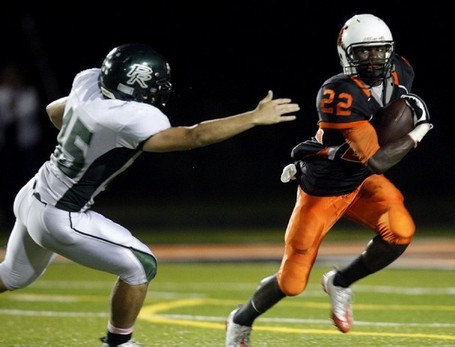 I think Faustin is becoming my latest man-crush.

Cody Webster - P - Harrisburg, PA (Central Dauphin East) - The streak is over for Central Dauphin East. In the final game of the season, Central Dauphin East got is first win of the year 12-7 over Altoona. I am wondering if Webster was hurt (no stats were posted) as CD East attempted a pair of two point conversions (he is also the placekicker) and had six punts for a dismal 25 yard average. Since Webster also plays receiver it is possible. CD East did not qualify for the state playoffs, so his season is over.

Reggie Pegram - RB - Dallas, TX (James Madison) - So much for perfection this week. Among all the teams this week, only Pegram's came out on the losing end, dropping a 37-26 decision to Lake Worth. The loss cost Madison the #1 seed in the district playoffs. Pegram ran 11 times for 92 yards.