Share All sharing options for: Welcome to the Fold: Tracking Edition Week 7

It is becoming a sad refrain here. The Saturday night/Sunday morning article covers yet another crushing loss, only to have Monday's recruiting round up cleanse the palette for the coming week. It would be nice if we can break this vicious cycle before basketball season. I know I feel like an Indiana fan saying that, but I really do wish basketball season would get here as fast as possible. Just remember, the first exhibition game is four weeks from tomorrow. I also promise an extensive basketball entry some time in the next two weeks.

Speaking of looking ahead, it is obvious that Danny Hope's ultimate fate will be decided by his recruiting prowess. I am nowhere near the growing bandwagon that wants him gone already. I want to see what these guys are going to do first.

Additional Note: I just want to say that of the four remaining 4-0 NFL teams, three of them have a Purdue quarterback on the roster. Sure, Curtis Painter hasn't had much to do with the Colts being 4-0, but Drew Brees and Kyle Orton continue to win games for the Saints and Broncos. I guess it pays to spend more time studying the game and less time selling Myoplex crap, right Brady? Also, can we finally get some love for Kyle Orton. I know he doesn't fill the stat sheet as a starter, but dammit, he just wins games. Isn't that the point?

Sean Robinson - QB - Rochester, IL (Rochester) - The Rockets continue their undefeated run atop Illinois' class 4A with another blowout, this one a 56-14 win over conference rival University. It was another great game for Robinson both rushing and receiving. He ran for 109 yards and three touchdowns on 12 carries while passing for 187 yards and two more touchdowns on 9 of 16 attempts. Rochester has yet to play a game where an opponent has been with 16 points of them.

Joe Gilliam - LB - Southport, IN (Southport) - Gilliam was a key cog in Southport's defense as the Cardinal knocked off Lawrence Central 21-10 Friday night. Unfortunately, the Statistics website from last week has not been updated. Southport is now 4-3 on the year.

Charles Torwudzo - WR - Brownsburg, IN (Brownsburg) - It was an excellent night for Brownsburg. First, Zionsville upset previously undefeated Fishers. Second, The Bulldogs won 24-8 over visiting Lafayette Harrison to move into a tie for first place atop the Hoosier Crossroads Conference. Brownsburg, Fishers, and Hamilton Southeastern are all 6-1 with Zionsville a game back at 5-2. Brownsburg will finish the season with games against Fishers and Zionsville. As for Chuck T, he had 4 catches for 88 yards including a 69 yard score.

Jeremy Cornelius - WR - Harrisburg, PA (Bishop McDevitt) - Bishop McDevitt remained undefeated with a 42-6 win over Lower Dauphin in league play. Cornelius had just one catch for six yards once again. The Crusaders seem to be using him more on defense though instead of offense.

De'Ron Flood - TE - O'Fallon, IL (O'Fallon) - Flood did not collect any statistics as O'Fallon grabbed a 17-7 win over Belleville East.

Mike Lee - LB - Pittsburgh, PA (Woodland Hills) - Lee helped power the Woodland Hills defense once against as they got a 27-3 win over Central Catholic. As the photo shoes, Lee (#21) is not afraid to play a little offense as well. Woodland Hills has used him as a tight end in some situations. 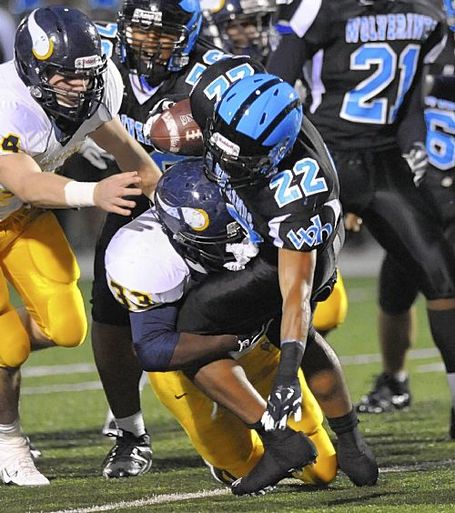 E.J. Johnson - DB - Cocoa, FL (Cocoa) - Cocoa had a slightly tougher game, winning 24-7 over Merritt Island this week. The Tigers have achieved an impressive #4 ranking overall in the state of Florida. The game wrap link comes complete with video. Johnson (#5) was used as a wide receiver and threw some good blocks on returns.

Will Lucas - LB - Lakeland, FL (Lakeland) - Lakeland thumped Plantation high 46-14 Friday night to remain undefeated. Lakeland is ranked #2 in Florida and in the top 10 in some national polls. They likely won't be challenged much until the get a rematch with St. Thomas Aquinas in Florida's Class 5A state title game. St. Thomas Aquinas is ranked #1 in the nation. As for Lucas, his statistics have not been updated at Lakeland's sight since week 2.

Jhony Faustin - DB - Naples, FL (Lely) - Lely suffered a very close loss Friday night, losing 20-17 to Lehigh on a late touchdown. I really hope it wasn't Faustin that was burned on the 92 yard touchdown pass, as Lehigh's quarterback only had two completions.

Isaiah Williams - WR - Miami, FL (Monsignor Pace) - I did not attend the Pace-Chaminade Madonna football game Friday night because hey, I was in Miami. Give me a bit of a break. I should have gone though, as Monsignor Pace continues to be the most difficult school to find stats for. Pace dropped the game 24-20. Like Purdue, Monsignor Pace could not score in the final seconds from inside the five. Though I don't have game-by-game statistics, I found that Williams leads his team with 11 catches for 204 yards and four touchdowns on the season.