Share All sharing options for: Basketball 2009-10: The Returning Players

I can barely contain my excitement. Growing up in Indiana, basketball is in my blood, and I can literally feel it coming around the corner. It felt like it began this morning when ESPN released its preseason coaches poll and Purdue was rated 7th.

So I have decided to make basketball a three part preview before next week's exhibition opener. Part 1 was up a few weeks ago talking about the huge crop of eight newcomers to the program. Today I'll hit on the returning players and what wee need from them in addition to what they already give us. Finally, I'll talk about the schedule in part three and what we can expect as a reasonable record.

The reason this team is so highly ranked is because of its returning cast. All five starters are back. A key player off the bench is back. These are all guys that have now been around for quite awhile, so much is expected of them. Lewis Jackson is the only returning starter that is not at least a junior, and big things are expected of him too. 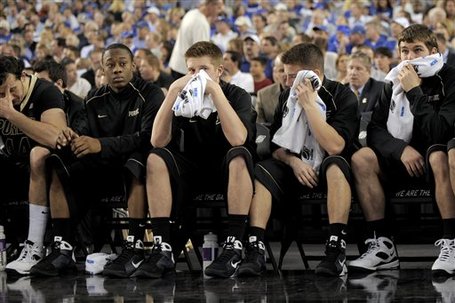 Seven months ago I said we needed to remember this moment because we would be back to avenge it.

JaJuan Johnson - My regular readers know that I am trying subtle hypnosis to get JaJuan to stay in West Lafayette after this season. I am of the opinion that if he stays, we will win the 2011 national title because he will have an experienced Sandi Marcius as a backup and a young Travis Carroll to teach for the future. Having those three on the same team for one season in 2011 could help Purdue jump into the realm of the country's elite.

We know what we're going to get from JJ. He has a solid mid-range jumper. He is developing into a great low post player. No one abuses the rim on thunder dunks like him. If anyone ventures within five feet of him the ball will quickly be going the other way on a swat. Now we just need him to become a dominant rebounder. Ultimately, I can see that part of his game holding us back if he doesn't develop. We no longer have Calasan and Green to help him on the boards. Marcius' development will help in this, as will Patrick Bade's. The game at Michigan last year showed what can happen when JJ gets in foul trouble, so it is critical that we don't rely on him too much. 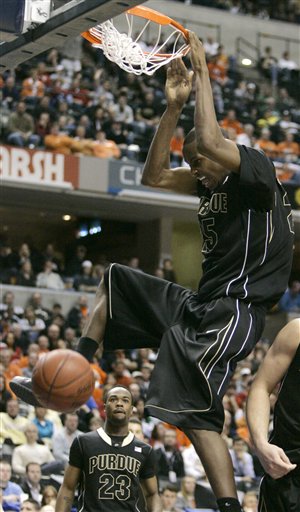 Seriously, how much fun is this? I can't dunk, so will someone who can please tell me?

Back to the hypnosis: It's too early, JaJuan. Education is important. You want to win a title and be a legend. You're not 21 yet so you haven't experienced Harry's or the Cactus...

Robbie Hummel - I honestly don't know how Robbie does it. He is a scorer, a rebounder, a deadly accurate shooter. He is also a tenacious rebounder and hustler. Robbie is a player that makes everyone else around him better because of the matchup problems he creates. If we have a smaller guy on him he can go inside and open up the 3-point shot for E'Twaun and Keaton Grant. If teams go big on him he draws that big man outside, opening up the middle for JJ. There really is no great way to guard him.

If Robbie can stay healthy this year Purdue has an excellent chance at a special season. Robbie single-handedly kept the UConn game in last year's tournament close. Purdue can win a lot of games with just Robbie Hummel playing well. With Hummel and everyone else playing well, it is very hard for them to lose games. We just need Robbie to be Robbie this year and stay healthy. If everyone steps up around him I don't think there is a team in the country we can't beat.

E'Twaun Moore - If 2008 was Robbie's breakout year as a freshman and 2009 was JJ's as a sophomore, the third of that "Baby Boilers" group is due this year. I think we have yet to see E'Twaun's talents as a pure scorer. I call him a scorer because he is a player that can create his own shot nearly anywhere on the floor. He is capable of taking over a game and exploding for a personal 12-0 run at any time.

E'Twaun has been far from a disappointment so far. He is a consistent scorer. We know we're getting 13-15 from him every night. What I want to see from him is the ability to just go apeshit and drop 30 on anyone at any time. I know he has it within him. We saw flashes of it last year in the losses to Oklahoma and Penn State, where he put the team on his back for long stretches. We also got a taste when he had a season high 26 on 10 of 14 shooting against IU. There was also the game at Illinois in 2008 when he went for 24 on 10 of 12 shooting. I want E'Twaun to be a bad, bad man that other teams fear. I want him to be the assassin that closes games out with absolutely backbreaking baskets. You know the type, when a team needs a stop and they defend until the shot clock runs down only to have someone drill a 17 foot jumper with a hand in his face. E'Twaun is that type of player, and this is his year.

Chris Kramer - Is he really a senior? I know I have talked about him coming back to play football next year, and that is a rumor that continues to grow legs. We still get one more year of basketball and Chris has made his goal clear: he wants his Defensive Player of the Year award back.

Kramer is the type of player where you love him if he is on your team, but hate him if you're facing him. I am convinced the man cannot feel pain. He is tenacious and drives other teams nuts with his mere presence. His scoring has gone down every year, but we don't need him to be a scorer. If he can generate a few points every night on turnovers and icing free throws that is fine with me. We have plenty of other guys that can score. Kramer generates plenty of offense through steals and assists even if he isn't the guy that actually puts the ball in the basket. We just need Kramer to be Kramer.

Keaton Grant - Any time you can have a guy like Keaton Grant come off the bench you know you're a good team. His scoring was down a little last year, but that is because he had a reduced role in the offense and was still recovering from knee surgery. With him completely healthy we have another great 3-point shooter. In 2008 he shot 44% from long range, but dipped to 35% last year with more attempts.

Keaton needs to be a shooter, plain and simple. We need him to return to his 2008 shooting form where he buried nearly every open look from beyond the arc. Part of the reason his numbers dropped could be because they moved the 3-point line out a foot, but he can still be a dangerous weapon off the bench from long range.

Lewis Jackson - I thought LewJack was the missing piece coming into last year. We needed a distributor who could force tempo and make us run at times. He filled that role perfectly, and now we just need him to mature both on and off the court. He offseason arrest for alcohol and pot was not a step in this direction. One has to think he is on very thin ice coming into this season, as he is already suspended for both exhibition games and the opener against Cal State Northridge. Honestly, it is a pretty toothless suspension. We don't need him in the exhibitions and Cal State Northridge is a game we should win regardless of who plays. Still, LewJack must learn and grow.

As a point guard, LewJack needs to improve on his assist to turnover ratio (nearly 3:2 last year, so not bad) and he needs to be a better free throw shooter. He is going to have the ball in his hands a lot at the end of games. He also will be driving the lane a lot and drawing contact, so 58% from the line won't cut it.

Ryne Smith - I have read a lot about how Smith has bulked up and is ready for more minutes this year. He is an interesting case. If you read the message board chatter after last season ended, Smith was a candidate for transfer because surely the newcomers would take what few minutes he had. It appears he has bulked up and improved his shooting stroke though.

Smith is almost exclusively a 3-point shooter. He was 6 of 21 from the field last year, but only four attempts were inside the arc. He was 5 of 17 from 3-point range, so if he has improved his stroke I know we can use him as a 3-point shooting specialist for a few minutes each night. In the college game you always have room for a kid that can just shoot the basketball, especially from long range. Smith gives us another option in this area.

Mark Wohlford - Wohlford is the only returning player that is not expected to have a huge impact on the court. The walk-on has only played in 18 career games, mostly as a final minute replacement when we've had a big lead. He has four career points. Wohlford will still be a leader though.

We have a lot of walk-ons. Bubba Day, Stevie Loveless, Kyle Coleman, and Dru Anthrop give us a virtual practice squad of players. Wohlford will likely take on a leadership role in this group, giving us essentially our own team to practice against. How can you not like that? If Wohlford has to play in a game and can give us anything at all it is gravy.

There is a reason we're ranked #7 in the preseason and on the short list for the Final Four. This is a damn good basketball team with a lot of returning talent plus some pretty good freshmen. All the parts fit each other well. That is the biggest aspect, especially in the style we play. We are not an individualistic team. We don't feature one guy that when you stop him, you stop us. We thrive on spreading around the scoring and playing team defense.

Tell me, Digger: Will you be using the highlighter to point out how wrong about Purdue you have been? If so, let me give you a few more so you don't run out.

Of course, the media doesn't like this. We'll probably piss of Digger Phelps all season long by <gasp> playing defense and doing what we need to do to win games. So what if we don't score 95 points per game. Who freaking cares! You don't need to score 95 when you can hold opponents under 60. The object of the game is to win. It doesn't matter if you win by 1 or 100. This team is built to win basketball games, and it will win a lot of them.