Packing up for the trip to Mad-town

Share All sharing options for: Packing up for the trip to Mad-town

At the very least, this matchup has gotten a lot more interesting in the last few weeks. Purdue has been the hotter team of late, though Wisconsin has a pair of losses to league heavyweights Iowa and Ohio State. There is no doubt that this is a different Purdue team than the one we saw in its last road trip. The landmark win over Ohio State is certainly cause for confidence. I am more encouraged, however, that we needed a less than perfect effort to win against Illinois.

Beating the Illini may not seem like much, but it is a major step forward for this team. Now that we know how to win games the ugly way, we can work on winning games the more aesthetically pleasing way. There is no time like the present with a visit to Madison on the schedule next.

This is also the week for the Hammer & Rails road trip. Last year's trip to Michigan State saw the official end of Purdue's bowl hopes in Tiller's final season, but we had a lot of fun anyway. I'll be documenting this game again travel journal-style like last year's Michigan State trip. Departure time is around 5:30 Friday evening from Indy, so I am hoping that this is a preview of a fun weekend. My previous road could use some work for sure:

Many of these losses (Illinois 2002, Hawaii, Indiana, Minnesota 2005, Ohio State 2003) have been of the heartbreaking variety, so it would be nice to change things up a bit this week.

Wisconsin has had a season that would do Joe Tiller proud so far. They have five wins over mediocre teams in Fresno State, Michigan State, Northern Illinois, Wofford, and Minnesota. In their other two games they have double digit losses to ranked teams. The win total is far from expected, but the Badgers are lacking a signature win over anyone. If you go on previous opponents it is hard to predict the outcome of the game. Wisconsin has beaten two teams (Northern Illinois and Minnesota) that Purdue lost to, but Purdue's 26-18 victory over Ohio State came a week after the Badgers dropped a 31-13 game to the Buckeyes. In my preseason preview, Adam of Bucky's 5th Quarter said he wasn't worried about this game. He is probably at least a little worried now.

As usual, Wisconsin is a strong running team. They average almost 185 yards per game on the ground, so continuing to play strong against the run is paramount. Leading the way is John Clay with 716 yards and seven touchdowns. Clay has been over 140 yards three times this season, so we must key on him. He is a big back at 6'2" 247 pounds, making him a pretty heavy load to stop. Zach Brown (217-3) should see some time as more of a speed back, but he has good size at 5'11" 208 lbs. Wisconsin will likely try to wear us down with a combination of both Brown and Clay.

The Wisconsin passing game has been relatively effective at times, but has struggled in the last two games. Scott Tolzien has a good completion percentage at 63.6% per game. He has thrown for 1,436 yards and nine touchdowns against eight interceptions. The last two games have been particularly bad, with five picks coming against no scores.Ohio State managed to return two picks for scores. 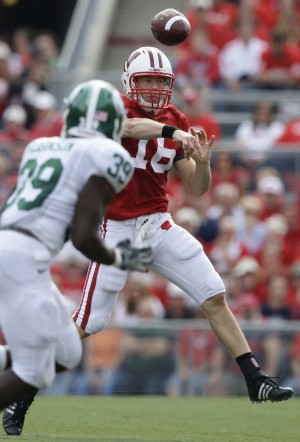 Scott Tolzien has struggled of late, being sacked 10 times and throwing five interceptions in the past two games.

Tolzien has been successful with three solid receivers to spread the ball around to. Nick Toon (29-357-2), Isaac Anderson (22-347-1), and Garrett Graham (29-331-4) are quality targets that will open up the running game for Clay and Brown. Tight end Lance Kendricks (15-153-2) is also a solid receiving option, especially in short yardage. We should be concerned if Tolzien can get the passing game going, because a two-dimensional Badger offense will be difficult to stop.

Heading into the Ohio State game Wisconsin's offensive line had given up just two sacks in five games. The Buckeyes got to Tolzien six times, then Iowa got him four more times. This should make things interesting when you consider that our defensive line has been dominant of late. They will need to be again. Wisconsin's offensive line is simply massive with Gabe Carimi, Josh Oglesby, John Moffitt, Kevin Zeitler, and Peter Konz all standing 6'4" or better and weighing more than 315 pounds. It is one of the biggest lines we will see this year.

At lot has been made about how good our offense is, but I still see struggling. We're generating yards, but we're not putting tons of points on the board. We still haven't topped 26 points since the Oregon game, but we've been over 20 each time. It will be imperative for us to take advantage of every opportunity to score against a pretty good defense.

Wisconsin will be hurt by the loss of linebacker Mike Taylor. Taylor was lost for the season with a severe knee injury against Iowa. Since he saw extensive time as a redshirt freshman, depth could be an issue. True freshman Chris Borland will start in his place. Culmer St. John and Jaevery McFadden man the other two linebacker spots.

Wisconsin's secondary has picked off nine passes on the season, with safety Chris Maragos among the league leaders with three picks. Jay Valai at the other safety position is also a threat for interceptions.

Wisconsin's defensive line has been dominant all year long. The Badgers have 19 quarterback sacks on the season, which is two fewer than Purdue's 21. O'Brien Schofield leads the team with 6.5 sacks, meaning he is a forced to be reckoned with as a defensive end. Schofield also leads the conference with 16.5 tackles for loss. The rest of the sacks have been spread around the defense fairly evenly, so Schofield is far from the only guy we need to stop.

Because of Phillip Welch, the Badgers are a feast or famine team on offense. Welch has hit on just eight of 14 field goal attempts, but he did have a long of 57 yards against Fresno State. It is the second longest field goal in the country this year other than the 59 yarder by Carson Wiggs. He has also missed an extra point. He doesn't have much of a leg on kickoffs with five touchbacks, so we should be able to take advantage of a kick return coverage unit that gives up over 25 yards per return. That kick return coverage also gave up a touchdown to Ray Small against Ohio State, so we shoul dhave very good field position and may even be able to break one with Al-Terek McBurse.

Brad Nortman is one of the conference's better punters, averaging more than 43 yards per kick. Neither return game does much of anything, though Borland does have one 25 yard return.

If we're going to get to a bowl game we have to win at least one of these next two road games. I would like to get it this week rather than rely on a win in Ann Arbor, where we haven't won in 43 years. We have also played well in Madison of late. This has been a strange series in that Purdue has not beaten Wisconsin at Purdue since 1997, but has a pair of wins in Madison (2000, 2003) in that time.

This is not a great offense if we can slow down the running game. The defense is pretty good, but it is hardly a brick wall. I certainly want to give the Badgers and edge since they are playing at home, but Purdue is due for a big road win. Of the big four road venues (Wisconsin, Penn State, Michigan, Ohio State) Purdue has had the most success in Madison.