Share All sharing options for: Welcome to the Fold: Tracking Edition Week 9

The tracking edition will likely be slowing down some after next week. Indiana finished its regular season on Friday night, so this week the state tournament begins. Every team gets invited, but some of our recruits have a tough draw in the tournament, so they may not go very far. Of course, Saturday we had quite a few prospects at Ross-Ade on their official campus visit. Hopefully they were impressed with what they saw and we can add some people to this list in the very near future.

Sean Robinson - QB - Rochester, IL (Rochester) - I stated last week that Robinson would face his toughest competition of the regular season this past week. I was wrong. Rochester blasted Bloomington Central Catholic 49-12 that all but clinched the Corn Belt Conference title for the Rockets. Rochester is now 8-0 for the first time in school history. Robinson was 6 of 11 for 130 and he ran for 38 yards and three touchdowns. With the season Robinson is having, one has to think he will be in the discussion for playing time immediately next year. 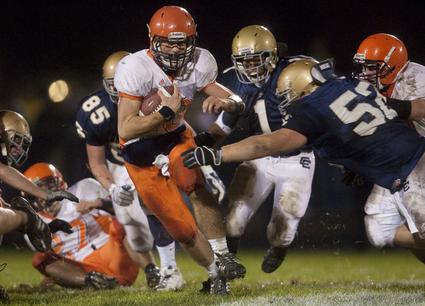 Robinson is a true dual-threat quarterback with some serious size.

Charles Torwudzo - WR - Brownsburg, IN (Brownsburg) - Chuck T was unable to help Brownsburg get a share of the Hoosier Crossroads Conference title as the Bulldogs fell to Fishers 33-25 Friday night. Torwudzo was limited to one six-yard catch, but he did catch a late two-point conversion. Brownsburg will likely be favored in the opening round of the sectional against Indianapolis Tech.

Jeremy Cornelius - WR - Harrisburg, PA (Bishop McDevitt) - Bishop McDevitt is another team that stayed undefeated this week with a 47-7 win over Chamberburg. Cornelius had possibly his best game of the season, catching three passes for 59 yards and a touchdown in the rout.

De'Ron Flood - TE - O'Fallon, IL (O'Fallon) - O'Fallon got back in the win column with a 20-7 win at Edwardsville last week. Flood did not catch a pass, however, as he appears nowhere in the box score.

Josh Davis - DT - Plain City, OH (Jonathan Alder) - Alder struggled early in the season, but rolled on Friday night with a lopsided 70-6 win over Ponitz Career Tech. This was a blowout in every sense of the word, as seen on the Alder page.

Mike Lee - LB - Pittsburgh, PA (Woodland Hills) - Woodland Hills moved to 6-1 on the season with a 38-7 win over Fox Chapel. Lee was central to another solid defensive effort for the Wolverines.

Ryan Isaac - DE - Michigan City, IN (Michigan City) - Michigan City will go into the tournament with a 6-3 record after beating Crown Point 35-3 Friday night.  The Wolves will open at home against fellow 6-3 team Elkhart Memorial this week.

E.J. Johnson - DB - Cocoa, FL (Cocoa) - Johnson was part of a shutout for the second straight week as Cocoa defeated Space Coast 63-0. This one actually comes with video, found here. Johnson is only shown a couple of times in the video, and he needs to work on his tackling from what I can see. Florida Today did have a larger focus story on the Cocoa program as a whole.

Will Lucas - LB - Lakeland, FL (Lakeland) - Lakeland kept on rolling as one of the nation's top high school teams with a 56-12 win over Ridge Community. Lakeland's site has yet to update Lucas' defensive stats through the Ridge game.

Jhony Faustin - DB - Naples, FL (Lely) - Lely needed overtime to top Naples 12-6 on Friday night. Faustin had a fantastic game in this rivalry, dubbed the Coconut Bowl. He had a 42 yard return of a blocked kick, a 95 yard kickoff return, and a critical interception at the three yard line. The article link even has video (Faustin wears #22). Watch him grab a great interception at the 55 second mark. 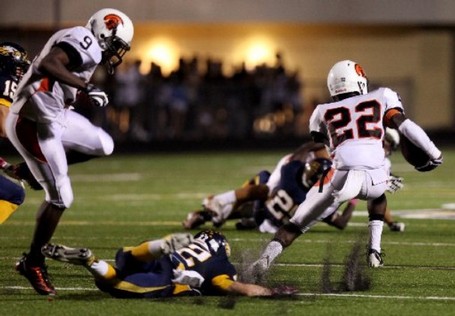 Faustin is a gamebreaker with the ball in his hands. I am excited to have him in next year's secondary.

Isaiah Williams - WR - Miami, FL (Monsignor Pace) - Williams had three catches for 59 yards as Pace grabbed a 48-0 win over Doral Academy. Williams' quarterback, Stephen Morris, is a year away from holding a clipboard for Jacory Harris at Miami.

Cody Webster - P - Harrisburg, PA (Central Dauphin East) - Unlike some of the other teams on this list, Webster's Central Dauphin East team is still in search of its first win on the season. They lost this past week 21-3 to State College, where Webster will someday punt for us in a much larger stadium. Webster had a 37 yard field goal for CD East's only points. That was good enough for a 3-0 lead going into the fourth quarter, but CD East blew it. Webster also punted seven times for a 34.1 yard average.