Today started very poorly for me. The job I told everyone about fell through and I was laid off after just three days. Carrying this up to West Lafayette, I needed a pick me up. Four hours later I was in Harry's with a drink in hand, shaking my head in disbelief. Guns ‘N Roses was playing, I could smell the popcorn, and I just smiled. That has to be what heaven feels like.

This is why I write here. This is why I devote so much time to following my alma mater. I know I am one of those people that lets my team affect my day, good or bad, too much when they are playing. Today I was glad, because it made it a very good day. As Purdue fans, we rarely have these great moments. We are not blessed as one of the great teams of college football that takes a nine win season for granted. It had been almost six years since we had experienced a win even close to this one. 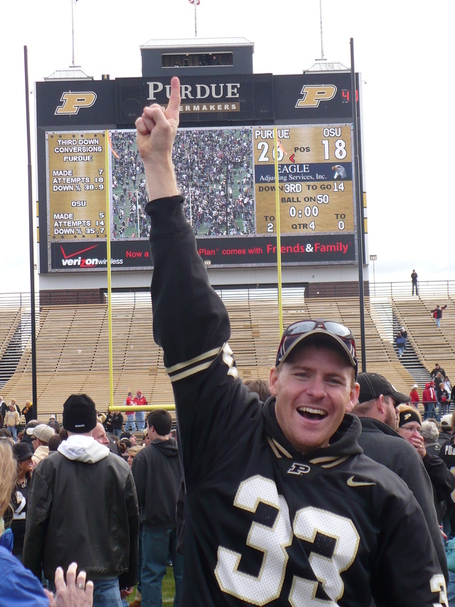 Get those 30 year old alumni off the field!

I am an emotional guy. I get fired up easily and put my heart into everything. Today, as we kept building on an inexplicable lead, I was so elated I was almost crying. As Ohio State began its comeback I kept saying, "If they want to kill me, blowing a 16-point fourth quarter lead against Ohio State after five straight losses is the way to do it." Even when they announced the final face mask penalty, which gave us the clinching first down, I was more stunned with disbelief than overjoyed. After several primal screams following each big sack, I just stood there once we had the last first down. Was it really over?

Seeing the students run on the field, Mrs. T-Mill and I couldn't resist. After a few moments we went down and joined everyone on the field. It was quite a sight. Alumni were out there taking pictures. The players were shaking hands with the students. I personally shook hands with Jaycen Taylor and David Pender, thanking them for the game. Mrs. T-Mill even got a hug from Pender. No one wanted to leave.

Make no mistake, Ohio State was TERRIBLE in this game, and that is a huge reason we won. They had five turnovers. They had an ineffective offense. Their passing game consisted of Terrelle Pryor throwing the ball up for grabs and hoping his receivers came down with it. We did what we needed to defensively in shutting down their running game and making Pryor beat us with his arm. He was unable to do so. Meanwhile, we had some mistakes, but unlike past weeks, we did not have to pay for them. We gave up zero points after three turnovers and another poor punt. There were also several fantastic performances on both sides of the ball:

Ryan Kerrigan - Whenever this young man plays Ohio State he is a beast. Nine tackles, three sacks, two forced fumbles, and a fumble recovery. If he does not when Defensive Player of the Week this week in the Big Ten it is a crime. For the record, he now has six sacks in two games against Pryor. Ohio State might double team him next year.

Carson Wiggs - He was four for five on field goals, and the miss was by about a foot from 52 yards. He also hit high pressure kicks from 55 and 49, then had to unexpectedly punt the rest of the game as Chris Summers continues to unfortunately struggle. Ladies and gentlemen, you Special Teams Player of the Week in the Big Ten.

David Pender - He laid out and had a gigantic pass block on a 3rd down attempt that ended a drive late in the third quarter. That was a huge play right there.

Aaron Valentin - 10 catches for 97 yards and two scores. Why don't we go for the sweep and give him the Big Ten Offensive Player of the Week?

Keith Smith - 12 catches and 125 yards. His catch over the middle just before halftime set up Wiggs' 55 yard field goal. That was a big kick, as it really turned the momentum of the whole game in our favor. I think it is safe to say that we do not win if Smith doesn't make that catch. The field goal changed everything because we hadn't played well, yet we led at halftime. It jump started the entire offense for the second half.

Joey Elliott - He missed some throws, but still had a solid game by making more throws than he missed.

Waynelle Gravesande - He did very well in the return game and had a good reception on a touchdown drive. Said to Mrs. T-Mill when he was catching punts: "I think if I smoked it would take less off my life than watching us return punts." With Gravesande, that factor is lowered somewhat.

I am going to enjoy this win for awhile. I knew I had a good feeling for a reason this week, and I was right in saying that the long losing streak against ranked teams would end. I was thinking last year in a cheap win over Minnesota when they were ranked 25th. I never thought it would come against Ohio State. The Buckeyes NEVER lose games like this. The last time they lost a game to a team that did not play in the BCS was to Purdue in 2004. Unless we win the rest of our games to finish 6-2 in Big Ten play and Penn State, Northwestern, Minnesota, and Iowa all finish with at least three conference losses that is not going to happen this year. Did you know they would have tied the Big Ten record for consecutive conference road wins with 17 had they won today? The last time they lost in conference play away from Columbus was at Penn State in 2005.

And this may be the delusion speaking, but the dream of a bowl game for Purdue in 2009 is not totally dead. If we beat a moribund Illinois next week we are 3-5. Suddenly, a split with Michigan and Wisconsin puts us 4-6 facing Michigan State at home. Beat the Spartans, and we're playing IU for a bowl.

Let's not get carried away though. It is still likely not going to happen, but this program got a gigantic shot of confidence today that it sorely needed. Those that were saying this was a loss in Sharpie *cough* JMoney, Boilerdowd *cough* can suck it (I kid, guys). I actually saw Boilerdowd at the game and he was a virtual wild man in section 128.

I leave you today with what we all want to see, Boilers on the field celebrating. We don't have to wait for basketball season anymore. 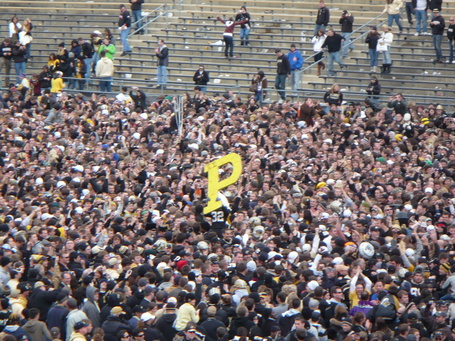 Albert Evans celebrates with the P 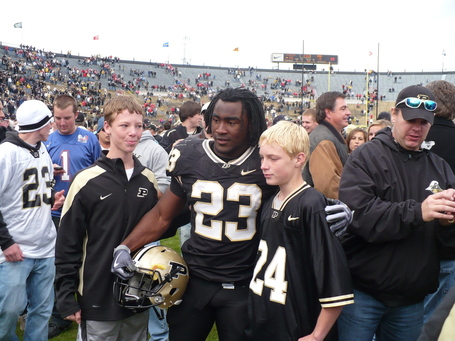 Ralph Bolden with a young fan on the field 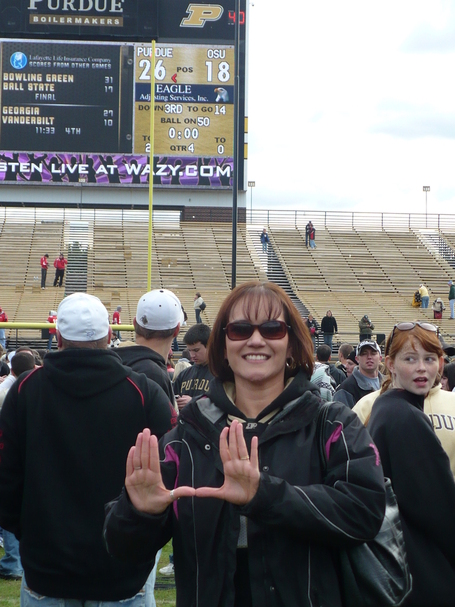 Mrs. T-Mill gets revenge for the 2002 Fiesta Bowl 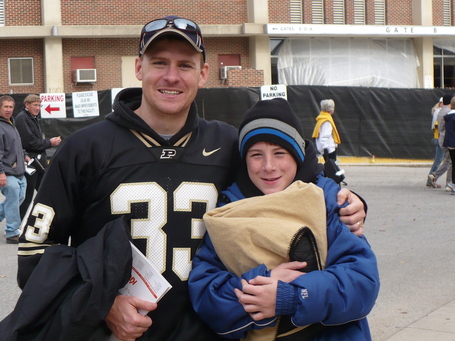 With my 11-year old nephew after his first Purdue game