Share All sharing options for: Welcome to the Fold: Tracking Edition Week 8

There is a big reason that I am willing to give coach Danny Hope the benefit of the doubt right now. As I discussed with Boilerdowd in the infamous podcast last week, many of our incoming recruits come from winning programs. Sean Robinson, Jeremy Cornelius, E.J. Johnson, and Will Lucas all are currently playing for teams that are ranked #1 in their respective states. Joe Gilliam, Charles Torwudzo, and Ryan Isaac are key players for teams that have been historically bad, but have improved greatly with them on the teams. We are getting a bunch of guys that are winners.

Right now, I would say we are a team that does not know how to win. The guys we have coming in will know how to win from the beginning because of their high school experience. All of them are playing at positions where they can develop into leaders of their respective units as well. I think this is a trait that will pay of huge dividends because they are not going to be guys that will tolerate losing. Let's see what they did this past week.

Sean Robinson - QB - Rochester, IL (Rochester) - Robinson has another blowout on his record as he keeps the Rockets ranked #1 in Illinois class 4A. Rochester won 44-0 over Eureka to move to 7-0. Robinson ran for a touchdown and threw for two more in this one to lead the Rockets. Rochester will probably face its toughest contest of the season this week When it visits 6-1 Central Catholic.

Joe Gilliam - LB - Southport, IN (Southport) - Southport dropped a close game to Bloomington North 35-28 to fall to 4-4 on the season. It has been a disappointing year for the Cardinals, who won Conference Indiana last year with an 8-1 regular season. The Indy Star didn't even provide a rudimentary box score for this one.

Charles Torwudzo - WR - Brownsburg, IN (Brownsburg) - Rain in central Indiana affected a lot of games Friday night. Brownsburg had a critical Hoosier Crossroads Conference game at Zionsville that ended in a 7-0 win for host Zionsville. Brownsburg was unable to complete a pass, so Torwudzo had no stats. Future Notre Dame linebacker/defensive end Blake Lueders scored the game's only touchdown.

Jeremy Cornelius - WR - Harrisburg, PA (Bishop McDevitt) - Cornelius had another quiet day of just two catches for 19 yards as Bishop McDevitt beat Altoona 49-0. There is a good action shot of Cornelius included with the story. 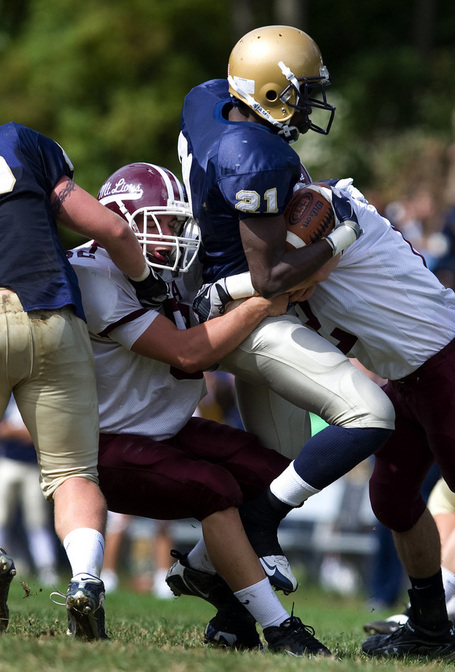 Cornelius (#21) looks like another big, strong receiver we desperately need.

De'Ron Flood - TE - O'Fallon, IL (O'Fallon) - O'Fallon had another 17-7 game this week, but unfortunately they were on the losing end this time against Belleville West. Flood had just one catch for one yard.

Josh Davis - DT - Plain City, OH (Jonathan Alder) - Alder had possibly its best game of the season last week as it crushed Fort Loramie 41-19. There was no word on Davis' stats in this game.

Ryan Isaac - DE - Michigan City, IN (Michigan City) - Michigan City lost its second game in a row and third of its last four 21-7 to LaPorte Friday night. Isaac was not mentioned in the story as having done much.

E.J. Johnson - DB - Cocoa, FL (Cocoa) - Johnson helped pitch a shutout as Cocoa stayed undefeated with a 56-0 thrashing of Satellite this week. There was no word on what Johnson did in the game, but a defensive shutout certainly had him involved.

Will Lucas - LB - Lakeland, FL (Lakeland) - Lakeland stayed unbeaten with a 38-9 win over Palm Bay Bayside Friday night. Lucas currently leads the team (stats are through four games) with 51 tackles, 10 of which are for loss. He also has four sacks, so we might be able to use him as (gasp) a blitzing linebacker!

Jesse Schmitt - LS - Louisville, KY (Trinity) - Schmitt saw plenty of long-snapping action as Trinity got back in the win column with a 40-14 win over Seneca.

Jhony Faustin - DB - Naples, FL (Lely) - I really like what I have heard about Jhony Faustin. Many of the things I have heard is that the only thing he lacks is size. He is a good cover corner with speed and instincts. We need that. Lely earned a 34-3 win over East Lee County Friday to move to 4-1. Here is a more complete story on the win.

Isaiah Williams - WR - Miami, FL (Monsignor Pace) - Pace got another win this week, this time topping Archbishop Carroll 44-7. Williams caught four passes for 68 yards and a touchdown in this game.

Cody Webster - P - Harrisburg, PA (Central Dauphin East) - Webster's team continues to struggle, falling to 0-6 on the year with a 41-13 loss to Harrisburg. Webster showed his versatility, as he also lines up at wide receiver. I like this because it opens things up to trick plays in the future. He had one catch for four yards, was 1 of 2 on extra points, and had three punts for 38.3 yards.