I am trying to decide which I should use cliché to begin this preview. Do I call it a must-win? A turning point game? Regardless, Purdue can still salvage this season and make a bowl game, but that task will become more difficult with a loss to the Wildcats. I don't think I am alone in thinking wins over Northwestern, Minnesota, Illinois, Michigan State, and Indiana would not be major upsets. That five game stretch, like any five game stretch, looks quite daunting at the moment. If we take things one game at a time, however, I think we can pull it off and maybe even spring an upset of Ohio State, Michigan, or Wisconsin.

I get the feeling that this Purdue team needs just one positive thing to get one a bit of a roll. That positive can come with a win this week. Those that are comparing Danny Hope to Jim Colletto are jumping the gun. Danny hope understands that an offense is supposed to move the ball. Danny Hope understands that a tie is not as good as a win (not that we can have ties anymore). After four games I am willing to be patient because I have seen some very good signs. The most prominent sign is that this team has had fight in it when past teams would have folded each of the last three weeks. It has come down to execution and mental mistakes, which can be corrected. We will need to correct them against a team that is suffering from many of the same issues. 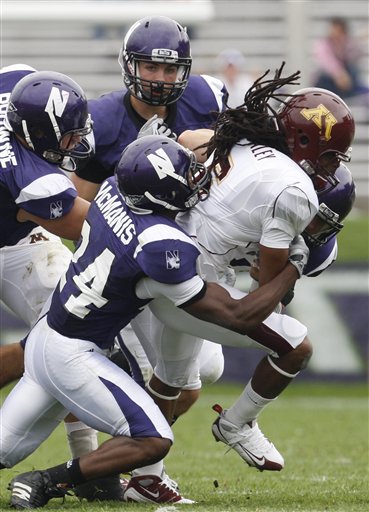 This year so far for the Wildcats:

Except for a week 1 blowout over Towson, things have not been comfortable for Northwestern. There were signs of panic when it took a last second field goal to beat Eastern Michigan. They fought back from an early 17-0 deficit to lose on a last second field goal at Syracuse. Finally, they did what Big Ten bowl teams hope not to do, and that is lose a league game at home 35-24 to Minnesota.

Clearly, this is a team that is reeling a bit like us. LTP said the Eastern Michigan game felt like a loss even though it was a win. Everyone else in the conference is now looking at Northwestern and thinking W again. This is a perception the Wildcats have fought for decades. It appeared to be gone coming into this year, but other than next week's game against an awful Miami (OH) team, everyone in the league sees Northwestern as a win toward bowl hopes.

The Wildcats' offensive numbers are skewed a bit after putting up 47 points and 485 yards against Towson in the opener. Those numbers, especially the rushing numbers are not indicative of what Northwestern has done in the three games hence. Northwestern gained 221 of its season rushing total of 522 yards. The passing game has been much more effective, churning out a little more than 250 yards per game.

I think a major reason that Northwestern has struggled somewhat is that they have gone away from quarterback Mike Kafka's strengths as a runner. Kafka is 96 of 133 as a passer for a very good 72% completion percentage. He has 1,049 yards, five touchdowns, and three interceptions on the year. The timing on those picks has been a bigger issue. A late interception set up Syracuse's winning field goal. Three of those five TD's came against Towson. As a running threat, Kafka has gained 102 yards, but has lost 95 on 10 sacks.

The 10 sacks is an issue we must take advantage of. The Wildcat offensive line has struggled mightily this year. Unfortunately, I question our ability to exploit this if we didn't attack a wounded quarterback last week. The line has to be considered a major disappointment based on what I wrote during my summer preview:

The main thing that will help Northwestern's offense with so few returning playmakers is its offensive line. Four starters come back from a line that gave up 18 sacks and paved the way for 1,800 yards rushing. It is a young line too, with just one senior. Desmond Taylor, Doug Bartels, Al Netter, and Ben Burkett all return to a line that has every projected starter under 300 pounds. That is very rare in the Big Ten, but it is helpful to Northwestern's hurry-up style of offense. They are a group more inclined to be athletic and quick rather than giant road-grinders. They really only need to give Kafka enough time to throw and holes to run through.

The Northwestern running game does not have one featured back we need to key on. Instead, we will see Stephen Simmons (150 yards, 2 TD's), Jacob Schmidt (128-1), and Arby Fields (120-3). Northwestern's longest run from scrimmage is a mere 25 yards, so there has not been a huge big play threat. ED Note: Simmons is now out according to Sippin' on Purple and has been out the last two weeks.

Much like last year, Northwestern will look to spread the ball around to multiple receivers. Zeke Markshausen (19 catches, 224 yards, 0 TD's) leads in receptions while Andrew Brewer (15-280-3) leads in yards and scores. Brewer has also thrown a 24 yard TD pass against Syracuse, so he is the Keith Smith of their offense. He is a big play threat with a 72 yard scoring reception against Towson. Drake Dunsmore (17-190-1) and Demetrius Fields (16-137-1) are solid possession receivers. We shouldn't have to guard as much against the big play as much as in past weeks. Brewer's 72 yard play against Towson in the offense's only play that has gone for more than 30 yards all year.

If you are looking for a unit that was supposed to be a strength but has so far disappointed, especially in the fourth quarter, you don't need to look at our own defense anymore. The Wildcat D has given up 24 points in each of the first three quarters so far, but has surrendered 38 points when the game is on the line in the final period. The numbers are even worse when you consider they shut out Towson in the final quarter. Against Minnesota, the Wildcats led 24-21 going into the 4th quarter, but gave up two touchdowns in the last nine minutes.

Northwestern has had a decent pass rush, collecting 8 sacks even though pass-rushing specialist Corey Wootton has been limited to 6 tackles and no sacks. The eight sacks have also come from eight different players, so they do like to mix it up on the pass rush.

Linebacker Ben Johnson has been the most versatile player on the defense so far. At 6'4" and 220 pounds he has good size for a linebacker. He also has 14 tackles, a sack, a fumble recovery, and 70 yard interception return for a touchdown. Fellow linebacker Quentin Davie leads the team with 30 tackles.

Joey Elliott will have to continue to watch his interceptions, as the Wildcats have six team interceptions from six different players. Safety Brad Phillips (24 tackles) has a pick and a sack to go with his tackling expertise. Fellow safety Brendan Smith (29 tackles) is also decent in pass coverage. Still, it is not a good sign when your two safeties are among the top three in tackles.

Northwestern's run defense has given up 132 yards per game. Minnesota's Duane Bennett had 89 yards and three scores last week, so Ralph Bolden should find some holes to run through. Northwestern is also giving up two rushing touchdowns per game. Thanks to Maize N' Brew's excellent work, we know that No one in the Big Ten has given up more touchdowns than Purdue and Northwestern.

Stefan Demos may be one of the worst punters in the nation statistically with an average of 36.9 per kick. While he doesn't have a huge leg, this can present problems for us. That means the coverage can get down field faster and recover any punts we might drop.  Aaron Valentin might have an area to exploit here if he can hold on to the ball since teams are averaging 7.3 yards per return against Northwestern. The kickoff coverage is not much better, giving up 21.6 yards per return.

Northwestern's return game has not been much of a threat. Simmons is averaging 23.8 yards per return, while Brendan Smith averages 4.6 yards per punt return. The kicking game has been hard to judge as Demos has been pulling double duty. He is 4 for 4 on field goals with a long of 49 yards, but he has missed an extra point.

This is a team that is almost a mirror image of our own. They have an experienced but underachieving defense. They have an offense led by a senior at quarterback that has waited for his turn behind a more experienced player before finally getting his full shot. They have talented running backs and receivers, but they are also young players. Both teams are also lacking confidence because of an inability to finish games. As a result, both teams could be 4-0 right now, but have only themselves to blame.