Yes, you got beat by a Townie

Share All sharing options for: Yes, you got beat by a Townie 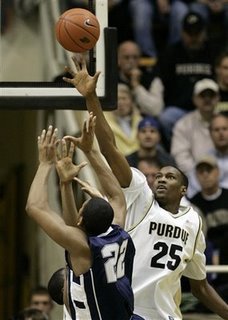 I remember watching Bobby Riddell play in high school. His Harrison High plays my beloved Kokomo Wildkats every year and I usually cover the game when it is played at Harrison. He was a deadly accurate 3-point shooter then, and Kokomo ended up playing his team twice in three of his four years of high school because both teams were in the same sectional. Kokomo ended his high school career in a bit of an upset during his senior year. At the time, I thought he was another very good high school player whose career was ending. Little did I know he would have a successful coda at Purdue.

Last night was the crescendo of said coda. Bobby had to play quite a bit as a freshman because of injuries, and has been a fan favorite since as the walk-on 3-point specialist. It was probably a combination of his 5’8" stature, his walk-on status, the fact he played high school ball less than 10 miles from Mackey Arena, and that he seemed to cash in on every little opportunity given.

I and the guys at Boiled Sports have been calling on him to play during Hummel’s recent injury hiatus simply because he is an experienced player that could spell a guy for a few minutes at a time. He’s been in the system for ages and he’s a very intelligent player, so what harm could he do? If he hit the occasional three it would be a bonus, but generally his playing time in critical minutes served only to rest others and not screw things up.

Last night was an incredible game for Bobby not just from a scoring standpoint, but from an overall effort as well. Sure, we needed the 13 points, but Bobby Buckets was even more integral by making smart passes that led to four assists and a couple of free throws when JJ or Chally got fouled after his great entry pass. That means he was probably responsible for at least 12 more points because of the way they finished the pass. In all, it added up to a badly needed win.

Bobby Buckets – As we were leaving the arena last night Bobby was all alone on the floor after being interviewed by the Big Ten Network. Not only did he shake hands with the front row of the students, several alumni came by the tunnel and cheered for him as he left by himself. He had the biggest smile you could imagine on his face. There will be no NBA for him. He’s getting an accounting job after this season and will limit his basketball career to rec leagues. For 2 hours last night He was the focus of adulation for 14,123 people. That’s just a great experience for him.

This isn’t the first time he has proved his worth in multiple minutes this year. Against Valpo he had 9 points in 21 minutes, both season highs before last night. In both games he was simply in the zone. I mean how often does a 5’8" walk-on go coast-to-coast on a drive for a key layup? He provided a huge spark, as he will in every game, because the place simply erupts whenever he scores. I think we have found a key bench player even when Hummel returns.

Nemanja Calasan – Last night’s weather was awful. That and the early tipoff meant that we didn’t get there until the second TV timeout. I missed most of Chally’s offensive work, but it was another solid game for him. His free throw for is even uglier when I see it in person. Still, he has been an incredibly valuable asset and I love when we play both him and JJ at the same time.

JaJuan Johnson – Please allow me to use hypnosis for a moment: "JaJuan, you are not ready for the NBA. You need to stay in school. The NBA is bad. Get a masters degree…" One thing I fear, with the way he is getting exponentially better before our eyes, is that someone will whisper into his ear that he can jump to the League now in order to further his development there. I see what we have coming next year and especially in the 2010 class with Travis Carroll and I am dreaming of seeing a banner in Mackey Arena. If he stays (as well as E’Twaun and Robbie) that 2010-11 team is going to be incredible because all the pieces will fit together. "You’re not ready JJ. You’re not even old enough to go to Harry’s yet. Trust me, you don’t want to miss it…"

Zero – Talor Battle came in as the Big Ten’s leading scorer at 17.4 points per game. Last night he got nothing. That’s right. We held the Big Ten’s most prolific scorers to zilch, and we made him like it. As I said in yesterday’s very brief preview: we just needed to contain one of their big three of Pringle, Battle, and Cornley. I would have been happy with what we did on Pringle, holding him to just five, but holding Battle to nothing was incredible.

As Boiled Sports points out, much of the credit here goes to LewJack for clamping down on him most of the night. I think that LewJack had a very underrated game both here and on the offensive end. It was fear of him as a weapon that opened things up for Bobby Buckets. Last night was a prime example of when we are the most dangerous. When we have guys like Buckets and Chally throwing in 24 points teams have no idea who to guard. They have to commit players to guard our guys that don’t normally score much and that frees things up for our normal scorers.

We have nine guys on this team that have been in double figures at least once this year, and none of them are relying on an Arkansas-Pine Bluff-type game as their one trip on the happy side of ten points. Each one has done it in a game where we needed it. How do you prepare for a team like that where nine players are legitimate threats? Then you add that we can completely take away an opponent’s leading scorer and it makes the equation for a win that much more favorable.

Marcus Green – This is the only negative for the night, but he has absolutely disappeared in the last three games. We need him to do the little things in order to be successful. I am talking about rebounding, post defense, offensive putbacks and the like. He’s done virtually nothing lately.

Last night’s win likely clinched an NCAA Tournament bid for us. I can’t see us dropping Saturday’s game at Iowa after we blew them out a month ago and I certainly don’t see us losing to Indiana at home. That would give us 20 wins with several of them being "quality" wins. The first goal of the season is therefore achieved. We will go to the NCAA tournament.

Now is the time to improve upon our seed and take things one game at a time in order to cash in on our slim chances of winning the conference. Most people are writing that game off, but if we beat Michigan State next Tuesday we will control our own destiny. I won’t give up on that goal until it cannot mathematically happen (and yes, I know I gave up on it after the Illinois game. Sue me.)

I recently answered a series of questions for The Rivalry, Esq. concerning our signing day and expectations on the 2009 football season. The Rivalry is an interesting blog, as it is a collaboration of an Ohio State fan and a Michigan fan. As soon as I make the move over to SB Nation he’ll be a colleague there as well.

Second, I wanted to mention that congratulations are in order for the women’s softball team. The Program earned its first top 25 ranking ever after upsetting #4 UCLA last week.