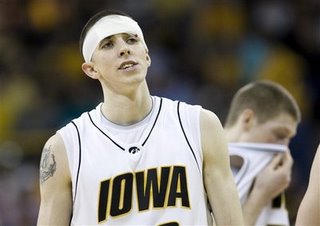 Special thanks to everyone who stopped by and participated in the open thread tonight. I apologize for my own comments cutting off so suddenly, but the battery on my laptop went from 36 minutes to 2 minutes in about three minutes. Black Heart Gold Pants’ open thread flat out kicked our ass in comments 399-25, but we won the game, so ha! It was also fun to watch the game with some students at Jake’s on campus. I am sure I put off the creepy older guy with a laptop vibe, but it was still fun to be there and cheer en masse when something good happened.

Early on the game had the feel of what it turned out to be. Defense ruled the day and points were at a premium. Iowa slowed things down and made us work for every basket, but unfortunately that is not the way to beat us. You can’t often beat a defensive minded team by forcing them to play that type of game because they know how to squeeze possessions. We know how to overcome in these tight, low-scoring contests so it played right into our hands.

Positives from the Iowa game:

E’Twaun Moore – I saw so much basketball today that the games are starting to blend together in my head. When I found out that E’Twaun’s double-double as the first of career I thought it had to be a mistake. It certainly didn’t seem like he had 16 points. As it turns out, the only other game where he has been in double-digits for rebounds was at Northwestern this year. He had 11 rebounds, but only 8 points then.

What really stands out about his game is that it was a very quiet 16 points he scored. As I was watching the game it didn’t seem like he had one huge basket or that 1 in every four points we scored was by him. There isn’t one basket that really stands out, while LewJack and Kramer’s points seemed to be in bigger spots. That is what makes it so big. All 16 points came in the flow of action and didn’t draw the attention of the defense. It was almost death by papercuts.

JaJuan Johnson – Defensively Iowa was afraid to get anywhere near him. He had the play of the game when he jumped about 47 feet in the air to reject a shot and start a fast break in which Kramer got a huge layup. Has anyone ever seen a guy go so high for a rejection? That was ridiculous altitude he got on that. I couldn’t jump that high if you let me jump, stop at the apex of my jump, and jump again from there!

Can you also believe he didn’t pull down a single rebound? This was another stat that I was sure had to be an error, but it wasn’t. Best of all, he stayed out of foul trouble. I continue to believe that JJ is the most important defender we have on the floor because he instantly takes away anything within five feet of the basket.

Negatives from the Iowa game:

Defense on Jake Kelly – How slow is our perimeter defense when Kelly continually drove to the basket time and again against us? This was almost embarrassing at times. He was another guy that has set or tied a career high for points against us. That is becoming a disturbing trend. We have to fix this against Kalen Lucas on Tuesday or he may score 40 against us.

3-point shooting – I’m certainly glad we didn’t need this because we could not knock down any open looks we got from outside. If we hit our shots in this game there is no way it is even close at the end. The only reason we ended up winning is because Iowa’s offense was poor and they were missing two of their main players. How much of a difference does a guy like Cyrus Tate make in today’s game? At least we were 17 of 27 inside the arc.

Free throw shooting – Once again, it was awful today. I am convinced we will not have consistency in this area at all this year. I am really tired of it being feast or famine. At least if it was consistently bad we could know what to expect and prepare for it each game. The scary thing is even Robbie missed both free throws he shot. Of course, who knows how much better the numbers would have looked had we gotten to the line more.

What else can you say about this one other than it was a win? It was your typical ugly win on the road in the Big Ten, but I’ll take any win on the road in this conference. When you look at it that way, what is so bad about this? I am sure that Wisconsin would rather have an ugly win at Iowa than the overtime loss they had. The same is true for Northwestern. That is what is seprataing us from being a true bubble team right now. We have found ways to win games like this one and Northwestern where we probably had no business winning.

I also like that Robbie Hummel played, though he played timidly for most of the game. With Michigan State coming up it may be useful to have him on the floor even as a decoy if he isn’t 100%. When he is out there he demands the attention of opposing defenses even now. That will just open things up for everyone else. This is, of course, assuming we can actually knock down some shots.

We’re going to need our best game of the season Tuesday night against Michigan State now. That’s kind of why I am glad we won today while playing like crap. I’d rather get that crap game out of the way now than have it Tuesday night. For a previous example, see our earlier game against Duke. For now I am about basketball’d out and I am simply going to rest on this win.