We should have gone to Ikea...

Share All sharing options for: We should have gone to Ikea... 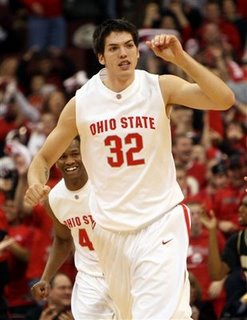 Though we bought our current futon mattress from Value City, I am glad the chain is going out of business. Maybe once they take that label off of Ohio State’s court we can overcome the curse of crappy, overpriced furniture that comes from playing there. That makes two straight overtime losses at the Schott for us, and each may cost us the Big Ten title.

One could easily place the blame on missing Robbie Hummel last night, but there were too many other factors that were a difference in this loss. As with all overtime losses, the thin margin means that one mistake in regulation can mean the difference between victory and defeat. Of our five losses, three have been of the overtime variety. In all three the overtimes have gone the same way. We surge ahead, have one empty possession, and that leads to a big final run by the opposing team.

We should have known there would be trouble before the overtime even started. At that point, the score was tied at 64. As many pundits have pointed out, we’re 17-0 when we hold teams under 54, and 0-5 now when they score more that that. Our overtime performance is simply baffling at this point. At least against Penn State and Duke we simply got outplayed.

Fortunately Slipknot rocked last night. Coheed and Cambria was very disappointing, and that was going on as I was tracking the second half via phone. At that point the Nine put on one hell of a show to help me forget about the loss. I even was inches from getting a Joey Jordison drumstick, which is funny because I certainly boxed out better on that than we did in our rebounding last night.

JaJuan Johnson – I liked his offense, but this was a game that we needed him to be a stronger rebounder. The rebounding statistics were ridiculous. Still, it was Johnson’s offense that kept us in this game. He was playing so well offensively that I am surprised we didn’t look for him at the end of regulation. He has proven his worth in wins at Northwestern and Wisconsin. He’s becoming the guy we can go to when we absolutely need a basket, as proved last night. That makes it even more frustrating that we had such an awful final play.

Lewis Jackson – Put me in the camp that loves to watch this kid play. The game is starting to come to him more and more, sot he freshman mistakes will soon be a thing of the past. One needs only to look at his stat line from last night to see that. Nine assists and just two turnovers is a huge step forward for him. The more this offense can feed off of the way he pushes tempo the better we will be.

Unfortunately, this is where the positives end for this game.

Negatives from the Ohio state game:

Keaton Grant – Yes, he had 14 points, but I could score 14 points if you let me just keep shootin 3-pointer after 3-pointer. It is amazing that Keaton got 12 3-points attempts while E’Twaun, the better shooter, had just four. Keaton almost redeemed himself with the three just before Kramer’s dunk that sent it to overtime, but it seemed like every time I checked the gametracker on my phone at the concert it said, "Keaton Grant missed 3-point jumper." It was hard to find a balance here, and it certainly would have helped if we were interested in rebounding those misses.

Are you kidding me?

We should accidentally get five per game. Shoot, Northwestern is one of the worst rebounding teams in the league and they get about eight per game. Getting just two offensive rebounds is a terrible lack of effort from all seven players that saw time on the floor. I cannot stand it when we take this attitude of not wanting to rebound. How else do you explain Ohio State’s 16 rebound edge in this category.

Fouls – When I wasn’t seeing "Keaton Grant missed 3-point jumper" I was seeing "Foul on (insert Purdue player)". It’s not so much that we allowed them to go to the line, but constant dumb fouls killed any momentum we tried to build in the second half.

Overall defense – I don’t know if we ran out of gas or what, but allowing a team to shoot 60% from the field, even if they are the best shooting team in the league, is completely uncharacteristic of us. This game was a lot like the Penn State game, but it is discouraging because we played without Hummel and Kramer then. I just can’t understand why we could get a critical stop last night. We even caused numerous turnovers and it still didn’t help. Like many of the Ohio State blogs stated, Ohio State is just very good if they are knocking down shots. They must have simply had a hot night.

The most disturbing line was Evan Turner’s 26-12-7 near triple double. Rarely this season has an opposing player been so dominant against us. Even when we played Blake Griffin, possibly the best player in the country and #1 pick in this year’s draft, we made him work for his points. Turner’s night seemed nearly effortless. William Buford had a huge game as well. That left Mullens free inside to dunk everything in sight. It is clear we have to change our defensive strategy against teams with one good big man and talented guards. Illinois, Oklahoma, and now Ohio State are all three very similar teams and we’ve now lost to all three in overtime.

E’Twaun Moore – He needed to shoot more. If we’re struggling offensively we have to find ways to free him up for 15 foot jumpers. That shot is money in the bank for him. We need E’Twaun to shoot more, especially if JaJuan is playing as well as he is playing in the post. If E’Twaun is shooting int hat case we can start playing an inside-out game that gives us more open looks not just for E’Twaun, but for Keaton and our other shooters.

The Illinois game is now a must-win if we’re going to win the Big Ten. We cannot afford to get swept by anyone in this conference. We can get Ohio State on the back end at home in a few weeks, but another loss to the Illini would be a major setback. It doesn’t look good since our losses have come in pairs so far. At least we still control our own destiny in the conference because we still have two games against Michigan State.

Paint the Town Orange is already leaking word about the members of the Paint Crew that will be infiltrating the Orange Krush this weekend. This should set up for a very interesting dynamic. I remember seeing before the season even started that many Purdue fans were wanting to get tickets and head over to the Assembly Hall. It doesn’t surprise me either since Illinois was down last year, we were supposed to be up, and they are technically the closest team in the conference to us. There potentially be a very large pro-Purdue crowd in attendance for what amounts to an elimination game for the Big Ten title. Now that there is a four way tie for second behind Michigan State we cannot afford to drop another game to Illinois.

Illinois has already added insult to injury by taking Michael Buchanan from us this morning. Other than that there is little news to report. I will have a complete signing day wrap either later tonight or tomorrow morning once the class is official.