A second chance in Champaign

Share All sharing options for: A second chance in Champaign 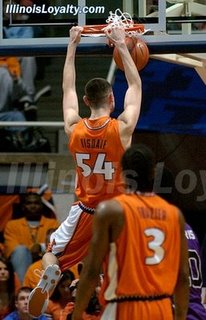 The results of voting are in and when the move is complete over to SB Nation the new site will be named Hammer and Rails. I think this has a pretty good ring to it, actually. Of the five choices it was my favorite, thought I liked some of the others that were already taken domain-wise better. With Hammer and Rails I even envisioned a new logo with Pete's hammer and a set of tracks crossed over each other. This would be superimposed over the Boilermaker statue and have the words Hammer and Rails reading across them like a railroad crossing sign. It looks good in my head at least. It's just too bad I have the artistic drawing ability of a special needs elementary student.

With the new name selected the move will likely occur over the next few weeks. There are several administrative tasks and such that I must do before everything goes live, but the first step is taken with the new name. The beauty of keeping this site is that I will be able to make a formal announcement here once everything is ready to go. As mentioned, I will keep this site running with less frequent updates in order to maintain some advertising contracts I got into. Some of the more recent content will port over, but this can stay active from an archiving standpoint as well for those of you readers that just cannot get enough of me.

With that done, we look ahead to Illinois on Sunday. Since Wisconsin finally played like a team that is interested in fighting for an NCAA berth it takes a little bit of the luster off of our game with the Illini. They aren't a good road team in conference play, which makes our loss in Mackey Arena to them doubly frustrating. It is their only road win in five attempts in conference play. If we can return the favor to them at the Assembly Hall it will likely knock them out of the Big Ten championship race with their fifth conference loss.

I don't have a good feeling about this because, like Ohio State, this is not a team we match up well against. As we learned last year in the Big Ten Tournament, Demetri McCamey has the ability to get hot at any time and start raining threes. In the first meeting this year they hit just one triple as a team, but they pounded us inside with 30 points from Mike Davis and Mike Tisdale. When you add that Alex Legion had 12 points in just his fourth game of the season (while only averaging 4.8 since) it is no wonder they beat us.

Another key to that game was poor shooting on our part. We shot less than 40% and were battling injuries to Kramer and Hummel that would cost them the next game at Penn State. Sadly, we find ourselves in the exact same situation this time against a team that plays even better at home. Only Clemson, currently a top 10 team that just crushed Duke, has gotten them at home this year, and that was by two points in the ACC/Big Ten Challenge.

Paint the Town Orange is wary of the Paint Crew making the hundred-mile or so trek over to Champaign. I doubt we'll take over the building like we did with a small contingent in State College, but I urge those that go to follow my personal motto when I travel to see the Boilers on the road: Go loud, there are fewer of us so it just means more work to do.

As of right now, the Illini are probably on the happy side of the NCAA bubble. ESPN's first Bubble Watch came out yesterday and it had only Michigan State as a lock, but both Purdue and Illinois in the "Should be in" category. I think that the winner of this game will be a virtual lock. For Purdue, it gives us another solid road win and puts us all alone in second place. For Illinois, it gives them a sweep over a team that has been consistently in the top 25. Right now, they probably need it only slightly more than we do. Regardless, I think both teams are going barring a monumental collapse. (Side note: I love our bracket in the newest bracketology. The four seed in a region where the top three are teams we have played in the last two years and are familiar with is a happy place to be.)

One factor we did not see in the first game was the son of Michael Jordan. Jeff Jordan has played in every game for the Illini this season except the first Purdue game. He's not much of a scorer, but he is known for his defensive presence. If their defense hassled us into a sub-40% day the first time we played them I don't feel good about having him on the floor.

This is such a difficult matchup for us defensively because they have the ability to go elsewhere if we take something away. Four players average in double figures, and they are all within two points of each other. If we collapse down inside on the Mikes they can go outside with McCamey and Meachem. If we guard the perimeter we do not have the post players, especially with an injured Robbie Hummel, to stop the Mikes from dominating like they did in game one.

Free throws were the biggest difference the first time around. A 15 of 27 day was the difference, especially since one more made freebie at the end of regulation would have made it a victory. We won the battle of the boards and even had double digit offensive rebounds, but poor shooting killed us. If we can force more turnovers this time and hit our shots I like our chances. Unfortunately, our losses tend to come in pairs and the Illini are awfully good at home. Illinois 68, Purdue 64

A couple of other things I wanted to touch on:

It is starting to look like six or even seven Big Ten teams will get into the NCAA's this year. Road wins become even more valuable because they will likely come against good teams that you are battling for a berth with. It doubly hurts them because it costs them a home game and forces them to make it up on the road in turn. While I am saving the Family Guy power rankings for one of the first posts on the new site, here is who I think has the best shot to go dancing in the Big Ten.

Michigan State – 100% chance – It is bizarre that they have two losses at home, especially to Northwestern and Penn State. Those serve to only muddle the rest of the conference picture behind them. With 18 wins and two games left against Indiana there is no way they don't get to the magic 20 needed.

Purdue – 97% chance – And I am likely moving us into the lock category with just one more decent road win. With Indiana at home and a (relatively) easy trip to Iowa left we'll have at least 19 wins.

Minnesota – 90% chance – The only thing hurting Minnesota is that they finished 0-3 against the two best teams in the league. With four of their next six on the road I think they are safe as long as they get one of them, especially since they are all against fellow bubble teams

Illinois – 90% chance – Outside of the Purdue win the Illini have a terrible road record. Should they lose next week at Northwestern they had better win at Penn State or Ohio State to feel totally safe. Assuming they hold serve at home though I can't see them out of the tournament at 22 wins even with a 1-8 Big Ten road record.

Penn State – 75% chance – The Michigan State road win did wonders for them. Unlike Minnesota, they are 2-1 against the top two and can really make a statement if they win in Mackey Arena next week. With only one game left against Indiana they have several chances to get NCAA quality wins, and probably only need two.

Ohio State – 75% chance – Add Ohio State to the list of teams using a victory over us as a "good win". The Notre Dame win continues to lose value, but the Miami win got a boost when the Canes rocked Wake Forest this week. There is a slight asterisk by it as Jack McClinton was ejected for most of that game and he is a huge difference maker. On the other hand, Miami still blew a big lead without him.

Michigan – 50% chance – The Wolverines have an odd road trip to Connecticut tomorrow. If they pull it off you might as well put them in the dance right now. That would give them three non-conference wins over teams that could easily win three of the hardest conferences to win (four if they get Michigan State or Purdue later). Because of some struggles in conference play they do have a tight margin for error with seven conference games to play. One critical one would be winning at Northwestern, as it would give them a sweep over a team that can catch them from behind.

Northwestern – 25% chance – It is a numbers game at this point for the Wildcats. If they keep winning they will climb higher. Each loss will deal a critical blow. It is absolutely essential that they win their remaining four home games against Michigan, Illinois, Ohio State, and Iowa. If they can then, in turn beat Iowa and Indiana on the road that would put them at 10-8 in a rough Big Ten and 19-10 overall. From there, a good showing in Indianapolis will build even more of a case.

Wisconsin – 10% chance – The Badgers got a pardon from the governor by breaking the six game losing streak last night, but I think it may be too late. Three of their final eight come against Iowa and Indiana, but I think they need to win at least six to be seriously considered. The Big Ten Tournament can help them greatly.

Iowa – 1% chance – And that one percent comes if they win four in four in Indy for the Big Ten Tournament. I can't take any team seriously that loses to Indiana this year. 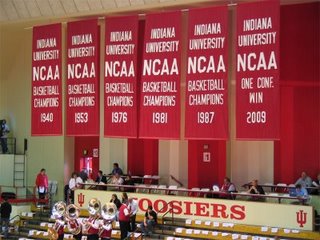 Indiana - .00000001% - I say that only because they still get invited to the Big Ten Tourney and therefore have a small chance. A massive food poisoning scare that takes down the other 10 teams, but spares the Hoosiers would do the trick. With all the recalls out there you never know what might be "accidentally" overlooked on a shipment of food to Indianapolis area hotels.

The final news of note came from the GBI print edition that I got a chance to read today. Drew Brees, who will always be one of my favorite players, became a father for the first time on January 15th. Drew and Brittany welcomed Baylen Robert Brees into the world. Now we just need to find a few more quarterbacks before he takes the reigns as a recruit in the class of 2027. Congratulations to Drew and Brittany. Their house in new Orleans is indeed the Cradle of Quarterbacks.