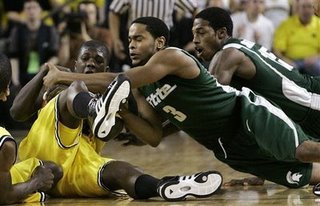 Despite all we have been through in this Big Ten season we still control our destiny for a piece of the championship. If we simply win the remainder of our games we will no worse than tie either Illinois or Michigan State for that title. The determination of our final seed in the Big Ten Tournament will then rest on the results of the March 1st game between the Spartans and Illini. An Illini win at home on Senior Day would give them the number one seed (assuming Purdue and Illinois win the rest of their games). A Spartan win would give us the number one seed (again, assuming we win out). One could therefore argue that tomorrow night's game is one of the three biggest games left in the conference season.

Both teams are banged up heading into this one. Robbie Hummel continues to battle his back injury, though he does say he will be 100% tomorrow night. After watching Saturday's game at Iowa I kind of doubt that statement. Raymar Morgan has missed the last three games for Michigan State with walking pneumonia, but he will play tomorrow night. Despite the injuries, this looks like the game we all expected when the season started. It will play a major role in determining the conference champion between the two teams everyone expected would decide it.

Ironically, I think I would feel better about this game if it were in East Lansing. The Spartans are a spotless 6-0 away from the Breslin Center in Big Ten play but they are only 4-2 at home. Penn State is the only team that even played inside 10 points against them on its home floor, and the Nittany Lions were later able to shock them 72-68 in East Lansing. We have them and Northwestern to thank for having a chance at a Big Ten championship. Both the Nittany Lions and Wildcats came up with "where the hell did THAT come from" victories at the Breslin Center, otherwise the Spartans would be well in front at 12-0 and likely playing for a #1 seed in the NCAA Tournament.

With Michigan State you know you're always playing one of the best teams in the country. Tom Izzo has never had a losing season in East Lansing and the Spartans haven't missed the NCAA Tournament since 1997. That streak will continue this year, as they are already comfortably into the Big Dance. They have been to four Final Fours in the last 10 years and even have a National Championship to show for it. So far they have had an interesting season. When they have lost, it has been a surprise each time because of the margin or the opponent. Maryland, a fringe NCAA team at best, blew them out by 18. North Carolina stomped them by 35 in the ACC/Big Ten challenge. The best win so far came against Texas when the Longhorns were ranked 5th, but they haven't done nearly as well since. Michigan State has a nice convincing sweep of Minnesota to its credit and did win at Ohio State.

Morgan's return to the lineup can only help them. He is their second leading scorer and rebounder at 12.3 and 6.0 per game respectively. It's not like they struggled without him for the past three games either, as all three games were pretty convincing wins over Minnesota, Indiana, and Michigan. Sophomore guard Kalin Lucas ignored my pleas last season to go pro early and he is leading the Spartans in scoring as a result at 14.8 points per game. He had a combined 36 points against us in both contests last season and his 20 in West Lafayette was a career high until he hit 24 a couple of times this year. If anything, he is even better than he was, so we had better watch him. He usually hits about three 3-pointers per game and he has a nearly unmatched ability to drive to the basket.

Lucas is also a strong distributor with almost five assists per game. He ranks fifth in that category amongst everyone in the Big Ten, but two of the four ahead of him in Minnesota's Al Nolen and Penn state's Talor Battle are players that struggled against our defense. Lucas is a player that is a lot like Battle because of his scoring ability, but he isn't as strong of a rebounder. What's encouraging is that we just shut out Battle last week, but you can rest assured that Michigan State knows this and used that tape to plan for this game.

In our losses we have struggled to keep teams off the offensive glass. Tomorrow night we will face the best offensive rebounding team in the league, and that has to give the Spartans confidence. Michigan State averages 14.2 offensive boards per game to easily lead the conference. They are also the best rebounding team overall at 42.7 per game, almost four boards better than second place Minnesota. In facing them we face a rebounding challenge we haven't faced since Oklahoma much earlier in the season. Goran Suton (9.9 ppg, 7.8 rpg) leads the conference in rebounding and is especially good on the offensive glass. Only IU's Tom Pritchard can equal him in second chance opportunities, and Pritchard has the handicap of playing with some terrible shooters.

Suton is the only player with overwhelming size at 6'10", but Morgan and Freshman Delvon Roe are true forwards that allow him to play center. It will be interesting to see how having a player like JaJuan Johnson, who can handle the ball on the perimeter as a big man, will affect their defensive strategy. Row and Morgan can play outside on him, thus allowing Suton to stay in the paint like more of a true center.

Durrell Summers (9.6ppg) is also a dangerous scoring from the other guard position with Lucas. Both he and Chris Allen (9.3 ppg) are the Spartans' most effective 3-point shooting threats, though you have to include Lucas in that category as well. Essentially, this is the most balanced team scoring-wise that we have faced since Illinois. With all the trouble the Illinois gave us with their versatility it certainly has me concerned. They also have plenty of depth as ten guys see regular action. Freshman Draymond Green could be a bit of a surprise weapon as he notched a career high 15 points and 12 rebounds against Indiana last weekend. Like a Marcus Green for us, he can get lost in the shuffle only to emerge for some unexpected offense and rebounding from time to time.

It is difficult to find a weakness for the Spartans. They do have a tendency to turn the ball over on occasion, but it isn't a glaring weakness. Their overall defensive numbers are on par with our own, so we can probably expect another game in the low 60's or even the 50's unless one team gets hot from the field. Their overall defense went from 10th to second in the conference if you count just Big Ten games, so they clearly have gotten better once conference play got rolling. They aren't a particularly strong free throw shooting team at just 68%, so that may come into play.

The first key to a Boilermaker victory is clearly a better shooting performance from the field. Hoisting up brick after brick from 3-point land like we did Saturday at Iowa won't get it done. Michigan State likes to foul, committing about 19 per game. I say we let them foul and get ourselves to the line. This is an inconsistent area for us, but if we can hit them in this one it will slow things down. The Spartans are the highest scoring team in the league by far at 74.6 points per game. We're second at 69.2. What makes this very interesting is that both teams feature very good defenses. Whichever offense can make the most headway will win. It should be a very interesting chess match type of game.

Finally, let's look at both of last year's games. Robbie Hummel missed the game in East Lansing and Purdue made a statement. Though the Boilers lost, they were surprisingly competitive and it was the first real time that the conference saw how good we could be. In one of the biggest "what if's" of last season, Robbie Hummel probably would have meant a victory in East Lansing and eventually a Big Ten title for us. He had 24 in the game in West Lafayette, including four 3-pointers. Kramer had 19 in the game in East Lansing while Chally had 18. If we can somehow get those two to repeat that performance we have an excellent chance at winning.

Defensively we must contain Lucas. If he starts scoring and distributing the ball to his teammates in key spots we are in trouble. Should we contain him like we did Battle last week we will take away a major part of their offense. Unfortunately, this isn't the only thing we have to do. Michigan State has many more weapons than Penn State. We have to keep them off of the offensive glass and avoid second chance points. Whenever a shot goes up we need to have someone personally boxing Suton out of the play so he isn't anywhere near the ball.

Much of this game depends on how well we start. I Robbie is playing effectively and we're hitting our shots I think we we'll win. If not, the Big Ten title will return to East Lansing. That said, I like our chances at home. I'm not driving up tomorrow night for nothing, after all. Purdue 62, Michigan State 60.