Share All sharing options for: Dead even, halfway home 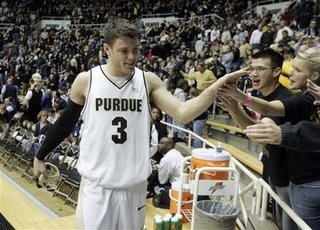 Ironically, we now have Penn State to thank. After the damage they did to our title hopes in the early conference season, their upset of Michigan State today in East Lansing completely erases our two early stumbles. We're now even with Sparty in the loss column and still have two games to play against them. Only Michigan State and Purdue can currently say they control their own destiny in the Big Ten race.

As I said earlier today, I didn't get to watch any of the Michigan game. I was out of town on a delayed anniversary trip, but J Money and Boilerdowd were more than happy to use my tickets and enjoy themselves at the game. Reaction to yesterday's contest has been varied:

UM Hoops is calling the flagrant foul and ejection of Manny Harris absurd. He was kind enough to point out that when Harris was in the game we were disrupting his rhythm. This is a very good sign because he is one of the best individual players in the conference. This bodes well for our defense later in the year.

Maize N' Brew is even more up in arms about the ejection, as does the Michigan Sports Center.

The Enlightened Spartan is worth a read basically because he thinks Michigan should have gotten over it, manned up, and won the damn game.

Boiled Sports had its own wrap of the day trip to West Lafayette, which is surprisingly free of commentary despite being the only eyewitness account to the play. They do have an important link to someone who thinks Kramer faked the contact.

Obviously the ejection was a major factor in yesterday's contest. Michigan was already short one player because of the Novak suspension. Taking away a player of Harris' caliber was certainly a blow as well. What many of the pro-Michigan blogs fails to see is that Purdue was actually making Harris a non-factor to that point, yet the Wolverines were leading. He was 2 of 7 from the field with five points, two rebounds, and no assists. These are well below his averages even if you factor in he played just half the game. Essentially, Michigan was playing well without its best player doing much.

Instead of getting fired up for what they felt was an unjust call and playing with even more intensity, the Wolverines crumbled. The team that ended up playing with fire was Purdue, and we flat out smoked them the rest of the way. Robbie Hummel, who is playing like a warrior at this point with a horrible back, started making shots E'Twaun was E'Twaun again. For the final 18 minutes we played like a team on a mission with something to prove. Michigan, the team that probably had more to prove and a reason to play fired up, chose to mope without Harris on the floor.

I tend to agree with the Enlightened Spartan on this one. From the replays I saw the elbow did not look intentional. Could it have been flagrant? Yes, I agree. Should it have warranted an ejection? Eh, I don't know. Joe Krabbenhoft's leveling of Lewis Jackson last week was much more intentional and didn't even get called a foul. That's what makes this hard to call. Either way, Michigan should have come out with an attitude of, "Oh yeah? Well, we were beating you without him doing much, so now we REALLY want to kick some ass."

One staggering statistic that stands out is that Michigan was 6 of 23 from 3-point land. I didn't even see the game, but 3-pointers were nearly 50% of their shot attempts. This is with the game in reach for the majority of the contest. You're the worst 3-point shooting team in the league and your strategy is to shoot 3-pointers against a team that forces everyone into bad looks? What are you, retarded? That is terrible coaching on the part of John Beilein. It's no wonder his team went el foldo when it mattered most.

The most troubling thing to come out of this game for us is the injury report. Kramer is going to play unless he is dead, and even then he would probably be downgraded to just questionable. Hummel has an injury that likely is not going to get better until the season is over. He's still effective, but I question how long that is going to last. What if he gets knocked down awkwardly just one time? LewJack is really up in the air with a concussion. Remember Kramer's last year at Clemson? It affected him for several games afterward. Even now he is still hesitant on drives to the basket. With just an eight man rotation we cannot afford to have almost half of it struggling with injuries. Well, we don't have a choice now.

We now get an Ohio State team that has a completely different look without David Lighty. With him, they were 7-0 and had three really good wins (though the Notre Dame one is quickly losing value). Without him, they have struggled against good teams. They've dropped two to Michigan State and one each to Illinois, Minnesota, and West Virginia. It is hard to evaluate their 5-4 conference record because in it are two wins over Indiana and one over Iowa. Both are the two worst teams in the conference and the only ones with little to know chance at making the NCAA's.

When we began this current stretch of five games with four on the road I expected that 3 wins would be really good, four would keep us in contention, and five would give us the conference lead. 60% of the way through We're already at really good. It's time to get greedy and go for both of these next two on the road. If we can get past Ohio State and Illinois there is no reason we cannot win this conference. If you believe in trends though we are due for a loss. We won five, then lost two. We won six, then lost two more. Now we have won six again.