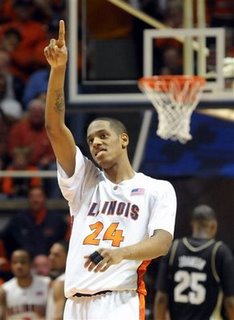 The Purdue highlight of the weekend happened in relative obscurity yesterday. The women’s softball season began its season by shocking 11 time national champion and 4th ranked UCLA on its home field yesterday by a score of 2-1. I mention that because it is a much better highlight than today’s basketball game.

In short, we sucked. This was not a situation like the previous three Big Ten losses where an injured or absent Robbie Hummel could have made a difference. You can't take away a player of his caliber and expect to be great, but we're better than we showed today without him. We played so poorly today that it wouldn’t have mattered if he played or not. We couldn’t play defense and we couldn’t hit shots. That’s an easy equation to figure out for a loss even if you do some things, like rebound, well.

Without Hummel it is apparent we are even more vulnerable to teams like this that can play the inside-outside game. Meachem had just nine points, but they came on three huge 3-pointers. Mike Davis owned us inside. We had no answer for him and couldn’t keep him off the offensive glass. To me, any time our defense forces fewer than 10 turnovers it is a pretty poor effort. This was just a brutal game to watch and earned the infamous "I turned it off" level with about five minutes to go.

The few positives from this game were JaJuan and LewJack. They were our only two consistent offensive threats and I do like the rapport they are forming with each other. JaJuan is evolving into the point where he will be a dominant player once Robbie Hummel gets fully healthy. If we can keep the two of them on the floor we will create so many matchup problems because many other teams won’t have big men to guard JaJuan in the paint and Robbie when he plays on the perimeter.

The negatives from this game are glaring though. Illinois’ balance is clearly an issue that causes problems for us when we play them. We can’t really focus on one player to stop like Davidson with Stephen Curry or to a lesser extent Wisconsin with Trevon Hughes. They play an offensive style that forces us to take a different approach defensively, and we haven’t adjusted to it yet. We’re not rotating when we need to rotate. I don’t know if it is a lack of communication on the floor or fatigue from only going seven beat, but something has to change.

Offensively, we’re not going to do squat unless we shoot better. If we’re not hitting from the perimeter there is only so much we can do inside with JaJuan. E’Twaun is the only player that can score consistently with dribble penetration, so if we’re not hitting from outside other teams simply work to deny JJ the ball and dare us to hit from outside. With that, a very good team suddenly becomes quite average. I realize that LewJack is getting better on his drives, but his layups are still a dicey proposition.

Unless we win the rest of our games now we can forget winning the Big Ten championship. Winning the rest of our games guarantees us a tie because we still have two in our pocket against Michigan State. I also think Michigan State is a team we match up better against. At this point, I don’t care if Robbie sits out as long as it gets him healthy for the NCAA’s. If he comes back at that time we suddenly become a very dangerous team no matter what our seed is. We’re 1-3 without him (and the one win was over an awful Arkansas Pine Bluff team), but we’re 16-3 with him. Two of those losses came in overtime as well.

Until he comes back though there are few solutions other than asking for better play from everyone else. Personally, I would give Bobby Riddell a couple of minutes a night just to get some rest for the other guys. It doesn’t have to be much, but he is capable of spelling guys and he can shoot the ball if he is open. At this point what can that hurt? It’s not like he hasn’t played before. You can’t tell me a short bench was an issue today when Illinois went with just seven guys for most of the contest themselves.

Wednesday won’t be easy because Penn State is a team that is getting better as the year goes on. They just suffered a demoralizing loss to Wisconsin at home, so they will be looking for a big win to get back into the NCAA discussion. Fortunately, I think it is a better matchup for us than the past two games have been. The extra day off after a Sunday game should help as well.

Speaking of Wednesday’s game, if anyone is interested I do have my tickets available. I was originally going to go, but I have to work on Wednesday night now covering a high school game. Since I have to take work where I can get it at the moment I am forced to give them up. If anyone is interested I am looking for face value for the tickets. If you live in Indianapolis it is even better because I can meet you to make the exchange.

For now though I am going to watch Drew Brees play in the Pro Bowl and try to forget today’s game ever happened.