Whiskey in the Jar (with final blogpoll ballot)

Share All sharing options for: Whiskey in the Jar (with final blogpoll ballot) 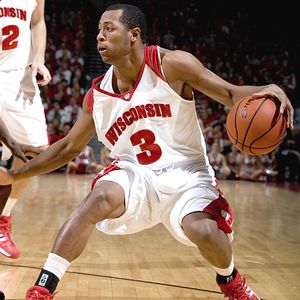 A weekend of high school basketball coverage (three games, weather permitting) means I won’t be headed to West Lafayette for Sunday’s game, but my tickets are in very good hands thanks to the crew at Boiled Sports. That group will face the biggest must win the program has had in years. We cannot afford to fall to 0-3 in the conference a win can get us right back in the race with a semi-easy stretch of games that follow. By no means are these games automatic wins, but going to Northwestern followed by hosting Iowa is one of the easier non-Indiana stretches on the schedule. All we can do is win games and see what else happens. If we win enough we’ll still be right there.

No one is going to run away with this conference. Everyone except Michigan State and Wisconsin already has one loss, and we can take a big step back into the race by knocking off the Badgers on Sunday.

I can tell you right now that Wisconsin wants this game badly. We were the only team they did not defeat in the conference last year. They went 19-0 against everyone not named Purdue. Both games were absolute classics and viewed as our best wins. The win in Mackey Arena signaled that we were back as a force in the conference while our win at the Kohl Center is the primary reason expectations were so high for this year. I doubt the students will rush the floor again, but a win would serve as a signal that our recent woes were a blip and not a trend.

Wisconsin’s 3 losses are not to bad teams. There is no shame in losing to Connecticut, but that was a 21 point setback in the Virgin Islands. They also have a three point loss at Marquette and a rare home loss to Texas. You will find all four of those teams currently in the top 15. This bodes well for us because we technically are still in the top 14, even though we won’t be after this week.

The Badgers haven’t really beaten anyone in their 12 wins though. They did beat Penn State by four in their Big Ten opener, but the best non-conference win was only by two points at Virginia Tech. The Hokies are one of the weaker teams in the ACC, so that tells me the Badgers have built their record by beating the bad and losing to the good.

The Badgers have long been known their incredible balance in scoring. They have three players averaging in double figures, but unlike Penn State there isn’t a major dropoff after the big three. They have rebounded nicely from the loss of Brian Butch as Marcus Landry (13.1 ppgs, 4.1rpg, and the recipient of the "Carl’s better" chants) has stepped up to lead them in scoring. Landry has his brother’s size with more Big Ten experience as a senior, but he is not the tenacious rebounder Carl was.

Junior guards Trevon Hughes (12.3 ppg) and Jason Bohannon (11.6ppg) pack quite a scoring punch from the perimeter. Wisconsin does not take a lot of 3-pointers. But Landry, Hughes, and Bohannon are the players that shoot from long range. Hughes and Bohannon take twice as many as Landry, while the rest of the team barely shoots from outside. Hughes is especially dangerous from long range hitting almost 50% (29 of 59). Other than that, Wisconsin is a patient team that wants to work the ball inside and get to the foul line. This shouldn’t come as a shock. It has been their M.O. for years.

We can expect the Badgers to get to the line about 20 times on Sunday. In both games against us last year they held a healthy advantage in free throws. Fortunately, we have already faced a gross discrepancy from the Oklahoma game so we should be prepared. They only hit 70% from the line, but if you shoot enough of them it can make a huge difference. John Lauer (9.9 ppg) is their main presence in the paint. He shoots better than 54% from the field, but struggles from the line at 53.7%. The 6’10" sophomore is not a strong rebounder for his size.

In rebounding the 6’7" Joe Krabbenhoft is a hard working pulling down a team high 6.5 boards per game. This Wisconsin team is not as big as in the past, especially with the departure of Butch. They also lack a true distributor with Hughes and Krabbenhoft being the only players with more than two assists per game. They are a team that will make us grind out a win. They won’t outscore us, but they will make us work for every single point. They are also very deep with a solid 9 man rotation.

Beating Wisconsin will be simple. We match up very well with them, and sometimes that is all that matters. We have to play our style of basketball, go to the hot hand, and fix all the little things that have cost us these last two games. Doing so will lead to improved offensive numbers. Wisconsin is the best defensive team in the conference. They are holding teams to just 55 points per game. With that, they don’t need a ton of assists or 3-pointers. Teams only shoot 38% from the field and a paltry 28% from 3-point land. If we can do better than those numbers victory is much more likely.

Playing at home will be big. They don’t force many turnovers, so if we can stop making unforced errors by actually grabbing the basketball when it is loose it will help. They won’t have the crowd behind them to fuel defensive stands either. They aren’t a very big either, so we need to work the ball inside for high percentage shots. We failed to do this against Penn State with a similar advantage. If we can’t recognize it on Sunday we might as well forget winning. Bombing away from 3-point range will not work against this team unless we are hitting said shots.

Lewis Jackson could be a big key in this one as well. Wisconsin loves a slower tempo, so if he can force the tempo before they get their defense set up it could lead to quick scores. Jackson is the one player we have that can accelerate the ball up the floor, though we did prove against Baylor in the NCAA’s a season ago that we can run if we want to. It is something we should try in this one, but only if it leads to lay-ups. We have sent hat forcing quick 3-pointers is not something we do well.

Ultimately, I think we’re due. We need this game and the return of Chris Kramer should help anchor us defensively. It remains to be seen if Hummel will play, but good teams win games in the face of adversity. If we truly are a good team we will find a way to win. Purdue 60, Wisconsin 56

I was asleep by the end of things last night, but Florida allegedly wrapped up another national title by beating Oklahoma last night. We’ll never truly know. Worthy teams like Texas, USC, and Utah never got their fair shot at it. Wouldn’t a Final Four of those four teams be absolutely fantastic?

I am not here to argue for the obvious which is an 8 team playoff using the current four BCS bowls. Until we have to deal with this system of bowls and it is the best we can do. If you want to award the championship to the team that was the most impressive in the bowls and on the season as a whole you have four real choices: USC, Florida, Texas, and Utah. Florida lost at home to a good but not great Mississippi team. Texas lost on the road to a really good Texas Tech team on the final play. USC lost on the road to a good but not great Oregon State team, then sort of avenged that loss by stomping Penn State (who stomped Oregon State). Utah simply didn’t lose and played a good (but not great) schedule. I would argue that Utah’s "good wins" were on par with Florida’s. The Utes beat Oregon State, BYU, TCU, and Alabama. Florida beat Alabama, Florida State, and underachieving teams in LSU and Georgia.

In my final ballot among the four I considered them all equal. Utah proved they belonged with multiple quality wins (unlike Hawaii a year ago) and who knows what they would do in a conference like the Pac-10. I picked them as number 1 ultimately because they did what no other team did: they didn’t lose. If the other teams wanted to argue then they should have won their respective games against lesser teams. Texas and Florida each had very tough losses, but I would put Florida ahead of Texas ironically because Mississippi beat Texas Tech. I almost reversed it and put Texas ahead very slightly based on the road vs. home nature of each loss. Remember, both beat Oklahoma by 10 on neutral fields (though in their home states), so that is a wash. Finally, I went with USC at #4 because they should have never lost to Oregon State. Oregon State got pansted by Penn State and Oregon. Oregon struggled with 4-8 Purdue, while Penn State got drilled by USC.

The rest of the top 25 is hard to rank because it seems like EVERY top 25 team lost its bowl game. Alabama and Oklahoma are easy choices for 5 and 6 because each had two losses, but to teams in the top 4.