Share All sharing options for: Short-handed tonight in Happy Valley 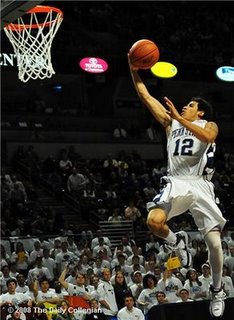 Tonight’s Penn State game has the potential to be one of our greatest victories of the season. We’re going on the road against a tough opponent, possibly without our best offensive and defensive weapons. If GBI is stating Hummel and Kramer won’t play then even if they do, I don’t expect much out of them. That means guys like Bobby Riddell and Ryne Smith will have to step up. We might even have a Chris Reid sighting. As difficult as the Big Ten will be this year we do not need this added degree of difficulty.

The Penn State blog nation is still focused on recovery from the Rose Bowl loss, so I haven’t seen much come across about tonight’s game. Based on a very light non-conference resume the Nittany Lions need a win like tonight can bring to have realistic NCAA Tournament hopes. The best win so far came at Georgia Tech in the ACC/Big Ten Challenge, but there isn’t much else. Rhode Island and Temple are respectable losses, but neither team is very strong. So far in conference play they have a win over Northwestern that involved a nice second half comeback and a close loss at Wisconsin.

The conference got a good look at this year’s Penn State team late last season when injuries forced many of their young players to the floor early. Geary Claxton was good enough to lead them to at least an NIT berth, but he got hurt early in the conference season. Penn State struggled to a 7-11 record in conference play, but was very tough to beat at home. They have actually won six straight conference home games dating back to a stunning upset of Michigan State last February.

Penn State is very similar to Illinois in that they are dominated by guard play. Talor Battle leads them in scoring with 18.7 points per game. He is actually just a tenth of a point behind Michigan’s Manny Harris in being the conference’s leading scorer. The 5’11" sophomore is one of the Big Ten’s best up and coming players. He really came on during conference play last year, so his best basketball this season may still be ahead of him. He’s a more dangerous shooter than Harris, shooting better than 42% from 3-point range. He also leads the conference in assists at 5.1 per game. For good measure, he is also Penn State’s second leading rebounder at better than 6.1 per game. Seeing as how he is just 5’11" that tells me he is all energy and effort. That makes for a dangerous combination with his talent.

Fellow guard Stanley Pringle is a similar player at 14.9 per game. Among player with at least 50 3-point attempts he is the best shooter in the league at 51.6% (32 of 62). He is also not afraid to drop dimes either with 3.3 assists per game. Combo forward Jamelle Cornley is often the recipient of those assists. I call him a combo forward because he uses his 6’5" 240 pound frame very well. He can bang inside even when slightly undersized. He can also step outside and hit the occasional three (6 of 12 on the season). The senior was injured late last season, missing the final three games. Cornley hits better than 50% of his shots from the field and his 14.5 points per game gives Penn State three of the top nine scorers in the league. He also leads them in rebounding at 7.1 per night.

After the big three Penn State’s scoring drops off significantly. David Jackson, Danny Morrissey, Andrew Jones III, and Jeff Brooks each contribute 4-6 points per night as solid complimentary players. Penn State does not have much else. Their depth essentially stops with a seven man rotation, so being short-handed won’t be as big of a deal as it would be with a deeper team. The fact Ryne Smith and Bobby Riddell are able to fill in at least for a few minutes will help.

If Calasan is closer to 100% it will be a major plus for us. One thing Penn State lacks is size. Jones III is the only regular player at 6’9" or higher. That means much will be on the shoulders of JaJuan to stay out of foul trouble and assert himself in the lane. I have seen his confidence grow almost nightly this year, so tonight it can make an even bigger leap. Offensively we should make an effort to pound the ball inside. They are smaller and don’t have much depth. Doing so should lead to easy baskets and/or foul trouble against their interior players.

One would think that this lack of size would be a hindrance to Penn state on the glass. As a team they are second in the conference in rebounding and third in offensive rebounds. That comes down to effort. Numbers like that show me this team works very hard at what they do. As much as we bemoan our own rebounding woes we actually rank just behind them in both categories. Whoever wins the battle of the offensive glass and second chance points will have a great chance of winning.

Many of our own rebounding numbers stem from the fact that we are not shooting the ball well ourselves. More missed shots means more opportunities for rebounds. It is no wonder we actually fair pretty well on the offensive glass.

Finally, Penn State is not a great free throw shooting team at 67%. Of course, with them you at least know what you get from the line. With us we can just as likely hit 100% as shoot 45%. Penn State gets plenty of chances from the line too as they are just behind Michigan State for most free throws attempted.

As I look at this game I see that it is one we can still win if we have managed to fix what has needed fixing for some time. We simply need to shoot better from the line and from the field. As poorly as we played against Illinois it would have been a win if we had simply shot better. That is even more paramount with Hummel and Kramer out. Penn State also takes care of the basketball better than any team in the conference. A lack of turnovers caused was a big factor against the Illini and could be tonight.

Now would be a good time to announce that the Beas Hamga rumors are true and he can plays tonight. Unfortunately, we won’t see him until December if at all. We could use his big form tonight. If ever a game called for us to work the ball inside to a wide body this is it. JaJuan needs to have a big game for us in the point with Calasan providing assistance. That will force Penn state to clamp down on them and hopefully open things up for Moore, Grant, Riddell, and Jackson. We need a strong "little things" game from Marcus Green too.

Defensively we have bigger issues. We clearly struggle on that end of the floor without Kramer. We have got to play better team defense and not rely on just one guy to lockdown the other team’s best player. We did a phenomenal job of this against Davidson, but looked awful against Illinois. We’re not going to take away all three of their top guys, but if we can contain just one of them it will force the Nittany Lions to go to someone not as proven.

Purdue has reacted very well to a week off so far. We spanked Davidson after a week off and I think we’ll have just enough tonight to pull a better-than-it-looks road win. Purdue 71, Penn State 69