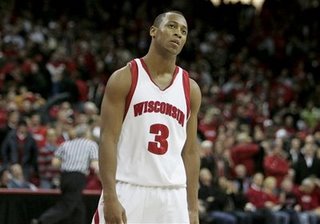 Special thanks again to everyone who participated in the open thread last night. That was the most successful one yet.

I love that this has become an old-school Big Ten year. Every road game for each team is going to be a battle. Those that want to win the conference will be the teams that figure out ways to overcome difficult environments and win on the road. As we near the halfway point of the conference season Illinois, Purdue, and Michigan State have begun to separate themselves from the pack just a little. The common thread amongst them is that they each have won a couple of road games they probably shouldn’t have.

Purdue is now 3-1 on the road in the conference, with the one loss coming without two of its best players. Michigan State is 4-0 and has fended off a tough challenge each time. Illinois is only 1-2 heading into tonight’s game at Minnesota, but that is a very big one they have since it came at Mackey Arena in overtime. They are a perfect 4-0 at home, whereas Purdue and Michigan State each have an unexpected home loss.

I call us road thieves because we easily could be 1-3 away from home right now. We got very lucky at Northwestern and last night we played the final minutes like the Big Ten favorite most think we are. This was a brutal game to watch as the officials let both teams know early on they would be allowed to play with minimal whistles. It is my hope that Lewis Jackson reminded the Wisconsin huddle to look at the scoreboard as they walked off the floor.

Field goal shooting – I know the percentage was as high as it has been all year, but the clutch shooting of Kramer, Hummel, and Grant down the stretch was the difference. This team must really like the rims at the Kohl Center because we shot an exceptionally high percentage there last season as well. This year Wisconsin didn’t have a gigantic free throw disparity, but Nankivil brought 17 points of unexpected scoring to equal last year's binge. Wisconsin came in as the worst 3-point shooting team in conference play but 11 of 18. Nankivil was 5 for 5 after being just 1 of 4 for his career! On the other end, Kramer had a big three despite being just 1 of 8 on the season.

For the most part everyone shot the ball well. E’Twaun couldn’t miss. We need to get him more 15 foot jumpers because he will hit them all night if he is open. Even Chally had three very big baskets. One play in particular stands out. LewJack drove the lane and threw up a lay-up that came hard of the glass, hit the front of the rim, but had enough backspin to drop through. That’s just a sign it is your night.

Keeping Wisconsin off the foul line – This was critical because you felt they were going to get there a lot more in their own building. It’s a good thing too since they only missed one shot. I think this is a direct result of JaJuan’s defense inside. He is becoming a true difference maker because he’s going to swat anything within five feet of him. He’s also learning how to play without fouling. I sad it after the Minnesota game, but of all our defensive players he makes the most difference because he takes away everything in the paint.

It should also be noted that Marcus Landry has been in double figures for every Big Ten contest this season except both Purdue games. If we were playing at home this is where the chants of, "Carl’s better" would come through. Landry just doesn’t look confident when he plays us, and much of that goes to the way JJ defended him. He’s also 7 for 25 from the field against us.

Poise – Boiled Sports already hit on this earlier today, but we showed a tremendous amount of poise. I think Krabbenhoft’s cheap shot (which should have resulted in an ejection and suspension) served more to motivate us than it did Wisconsin. We ended up controlling a good portion of the game from there. Even at the end when we were down five we allowed few second chances and took advantage of our first chances. Grant’s late three was another that I thought was too deep, but splashed home. Kramer’s was unexpected, but in rhythm. As for Hummel’s shot, I originally thought he was on the line. Once they showed the replay though it was the correct call in making it a three. While Wisconsin was hitting threes all night, those three by us were like a combination knockout punch.

Credit also needs to be doled out to JaJuan again for grabbing a big rebound and hitting those free throws at the end. It seems like he really took the miss at the end of the Illinois game to heart. It's unfortunate that it is a miss that will resonate throughout the season, but we're doing a good job of lessening its effect.

It turned out we needed both because of Hughes, but he could have hit that last one from 90 feet and it wouldn’t have mattered. We also had the foresight to quickly inbound the ball after it was made to allow the small amount of time left to dwindle away before Wisconsin could set up its defense for a desperation steal.

Negatives from the Wisconsin game:

Perimeter defense – I know we didn’t expect them to make 11 3-pointers, but we struggled to adjust all night. I’ll give credit to the Badgers though. They were very patient and waited to find the open man. They actually finished with 15 assists, which is one more than we had. I won’t even get into the job we did on Nankivil. It is just frustrating to see a guy who is not a scorer have a night where he can’t miss.

Krabbenhoft – This guy is simply a thug of the highest order and has no place on a basketball court. The pick was fine. Raising the shoulder and elbow into it was uncalled for. I can’t believe an official was looking right at it and called nothing. There are two rules you don’t violate on the court: You don’t go at someone’s legs when they are in the air and you don’t throw elbows. The former happened to me once in a co-rec game and I would have gotten into a fight had I not landed on my spine and been rolling around in pain. The later happened to LewJack last night. I really hope he reminded Krabbenhoft to look at the scoreboard when it was over.

I'm sorry, but his shot really bothered me and lowered my opinion of Wisconsin's profile. I was taught from basketball camp in the second grade on that you never through the shoulder and elbow into someone on a pick. Instead, he blew up LewJack like Jake Standford blew up that random Eastern Illinois defender in 2007. Shoot, if he is smart and just goes limp he likely gets a cheap foul on LewJack. As much as Jackson changes the game for us it is more damaging to have him ont he bench in foul trouble.

After we started the Big Ten season 0-2 I was really worried about this five game stretch we are currently in. I had figured our championship dreams were over because there was no way we’d go 5-0 in this stretch where four of the five are on the road. Well, We’re 40% of the way through and we haven’t lost yet. Now we get a Michigan team at home that seems to be very up and down. They are the only team in the country that has beaten Duke, but they’ve also lost to Maryland who recently lost to Duke by 41. I won’t even go into detail about the fact they beat Savannah State, one of the worst D-1 teams in the country, by two in overtime. This feels like a game Purdue could win by 25 or have all kinds of problems.

After that we go to Ohio State and Illinois. We have never won in Ohio State’s new arena and Illinois is spotless at home in conference play. This just means our work is far from over. If we can win these next three it will likely erase our slow start. In truth, however, we don’t have an easy game until facing Indiana on February 21st.

For now I will take being where we are at. With a pair of games against Michigan State and one with Illinois remaining we control our own destiny in the Big Ten. The way we have been playing lately leaves me with little doubt we can make good on that promise if we continue playing well.