Share All sharing options for: Recruiting news and notes 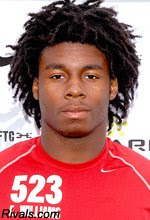 The Boilers got another solid Florida recruit today in the addition of Florida 3-star wide receiver Eric Williams. Williams hales from Bradenton, Florida and is the latest speedy player to come to Purdue under coach Danny Hope’s new philosophy. Williams joins a growing number of Florida recruits for us. Currently we have 12 commits from the sunshine state without a single in-state commitment. I am perfectly fine with that. There are only a handful of solid division players in this state anyway for football. This place always has been a basketball state and always will be. Coach Hope is seeing the Florida has a ton of talent to offer, and much of it is very quick on the football field.

About the only knock I have on Williams is that there isn’t much size. Purdue has lacked a big, fast receiver in the past. Selwyn Limon was supposed to be that receiver but he couldn’t obey the rules. We have run our offense successfully with guys that are Williams’ size, but unfortunately our lack of a big, physical receiver has hurt us in big games. As for next year, Williams, Gary Bush, and Josh Johnson may compete for time, but players like Arsenio Curry and Keith Smith will be as close to physical receivers as we can muster.

6’3" Xavier Reese, another recent commitment, could be the type of receiver we need though. We beat out several other quality schools to get Reese. Because of his size alone he may get a much closer look in 2009. There is little question that wise receiver is a position of need with many unproven players in the mix. Guys like Waynelle Gravesande, Jeff Panfil, and Kris Staats have been with the program awhile without making on the field contributions.

The same is true for the tight end position where incoming freshman Gabe Holmes will battle Kyle Adams, Colton McKey, and Jeff Lindsay for time. Purdue’s offense has run best when the tight end is a receiving threat (see Stratton, Tim, and Keller, Dustin). In fact, one of the jokes I remember from Tiller’s early years was when Jon Blackman kept making catch after catch and Jim Colletto, then offensive coordinator at Notre Dame, frantically looked through the rule book and roster to see if 1. Tight ends could catch passes, and 2. Who that Blackman kid was and if he recruited him. I still think Lindsay is a waste at tight end, especially when he was recruited as a 4-star linebacker and we need linebackers. It’s not my call though.

I am very encouraged that coach Hope is making these positions a priority in recruiting. We are getting guys that can contribute potentially in 2009. That only makes things better for the following years. I still believe we can return to a bowl this coming season. If we do, 2010 could be really special.

Friday night I got to see a potential future Boiler when I covered the Lafayette Jeff at Zionsville game. In that game, point guard Jesse Berry and the Bronchos got absolutely drilled 83-52. Berry is listed as having high interest in Purdue for the 2010 class, as well as medium interest for Indiana, Butler, Ball State, and Kentucky. After seeing him play, they can have him.

Berry is clearly a very athletic guard. He can create his own shot, push the tempo, and has great leaping ability. He gets more leap in his jump shot than I can get in two of mine combined. I did not like his attitude, however. I had him for 12 points on 4 of 10 shooting from the field, but he fouled out with a number of stupid fouls. After he picked up his third foul with 3:31 left in the first half you could see on his face he no longer had any desire to play in the game. Jeff was down only four at the half, but came out with no emotion or energy in the second half. This was also just Berry’s second game back after a 3 ½ game suspension. From my insider’s perspective at Hickory Husker.com I have been told that he is a player that goes hard when things are going well, but really shows an attitude when his team is struggling. As one of the catalysts of a team that was once 5-0 and ranked #2 in the state it tells me a lot that Lafayette Jeff has lost six of its last eight games.

This was a game he could have taken over with his athleticism, but once he got called for that third foul (and it was a dumb one 40 feet from the basket) you could tell he checked out even with the game very much in doubt. We do not need that kind of an attitude at Purdue. Anthony Johnson and Terone Johnson sound like much better players at the moment, and I would rather get another big man anyway.

In a move that I think is a very smart one for new Illinois State coach Brock Spack, Taylor Stubblefield has been announced as the new wide receivers coach for the Redbirds. The guy may know what he’s doing since no one has more receptions in NCAA history than he does. Taylor is a nice guy too. I’d love to see this as a springboard to his eventual return to Purdue as an assistant.

Arizona Cardinals picked by Off the Tracks to win Super Bowl

No, I am not crazy. The guys at Boiled Sports have seen their teams systematically eliminated over the past few weeks of the playoffs, but I suggest we all get behind the Cardinals. Why, do you ask? Well, aside from the fact it would stick in the craw of all the so-called "experts" to have the lowly Cardinals win a Super Bowl, they are the only team left with a former Purdue player on the roster.

It’s a good one too in long-time veteran Chike Okeafor. Okeafor was one of the stars of coach Tiller’s early teams and already had a strike against him by being a Jim Colletto recruit. Chike is on his third NFL team, but this is the farthest he has ever been in the playoffs as a 10-year man. Most Purdue fans remember him from the night he and Rosevelt Colvin combined to absolutely own Michael Bishop and Kansas State in the Alamo Bowl.

Arizona is a likeable team. Once my teams are eliminated (often early) I become a fan of the team that has had the least historical success. It is hard to refute that argument with Arizona. It has to be an exciting time for all four long-time Arizona Cardinals fans.

As a final message today I wanted to let my readers know that programming could suddenly get very sparse this week. I know people don’t anxiously refresh their browsers to see my latest posts, but I wanted to let people know that there may be a 3-5 day break in posting for awhile. My grandmother in South Carolina is nearly at the end of her battle with stage four lung cancer. I was told by my father last night that she is not expected to survive the week and has already slipped into a coma.

My parents are likely leaving for South Carolina tomorrow. My plan is to stay in Indiana until I have a funeral date because, unfortunately, I have to take what little work I can find at the moment and I am scheduled to cover a basketball game tomorrow night, Friday night, and two on Saturday. Thanks again to all my readers who expressed condolences when my other grandmother passed in September, and thank you again for reading.