Share All sharing options for: Recruiting and coaching news breaks 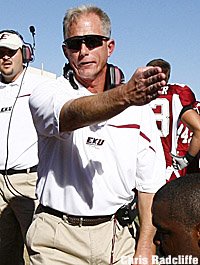 The past few days have been busy on the football side of things. Both of Purdue's coaching vacancies have since been filled, but we lost a quality recruit Miami. The loss of Shayon Green is troubling. I don't blame him for wanting to head to Miami because of the weather. I can't fault him for that when I want to move down there myself. It is troubling though because his defection comes at a position where we have proven we regularly put guys into the NFL. There is no guarantee he was next in our long line of defensive ends. We have had other guys come in with higher expectations who never even played a down for us at the same position. Green looked like a player with a major upside though. Finding playing time at Miami with their huge number of talented player will be tough. I do wish him well though. Because of Mrs. T-Mill I'll get to see him play on Saturday's, just in a different uniform.

This doesn't make up for it, but we did get another recruit yesterday in Antavian Edison from Ft. Myers, Florida. He's not a big kid and isn't highly rated, but as the old adage goes, you cannot teach speed. As soon as I saw his 40 numbers I was immediately thinking kick returner for this kid. We haven't had a punt return game to speak of since Anthony Chambers left. Part of what made us dangerous in 2007 was that we had a threat on every kickoff to take it to the house. More than likely Edison is a redshirt target for the 2009 season. You never know when his sheer speed could make a difference, however, in the return game. Remebmer, Devin Hester is roughly the same size. He also tested slightly faster than Edison in the 40.

The other major news was the hiring of Cornell Jackson as running backs coach and Donn Landholm as our new defensive coordinator. Landholm is the more important hiring since he leads an entire unit, but it is an underwhelming hire. We certainly are not going to be highly touted coming into the 2009 season based on the coaching staff alone. I tend to agree with Boilerdowd in that this is a rather underwhelming hire. Of course, I could be proven wrong. Maybe he actually has the ability to make in game adjustments and cover a receiver that is beating our secondary like a rented mule. That, or he might actually know that a halfback screen or a draw is indeed a legal play and we're allowed to stop it. I don't care if he just finished coaching in the California Penal League (to borrow from Major League), as long as he does the job well.

Jackson could be a good find, but I do question why we hired a guy to coach running backs when he has been coaching linebackers for several years. The running is what is going to carry next season, at least early on. Our most promising recruit is a running back. Therefore, this is a coaching position that will need to produce immediately. Fortunately, I like that we have Jaycen Taylor coming back, The fifth year senior is almost like a coach at this point for the younger guys. I think his leadership will help as Jackson gets acclimated. Unfortunately we don't have a similar leader on the defense. Don't get me wrong. I like the guys we have coming back. It's great that we have everyone in the secondary back and plenty of experience returning on the line. What we lack is a take charge leader on the field. Of the player returning, I could see Chris Carlino growing into that role.

I was going to finish today's entry with a new themed power rankings, but I am having troubling linking each team to a cast member from Family Guy as per suggestion for the last rankings. For now I will hang on to it until tomorrow when we have another look at Wisconsin.

Of course, if you want to place a friendly wager or two on the game, feel free to visit Bet Against Me. There is absolutely zero risk because Bet Against Me doesn't even use real money.

Instead of betting your own money, when you log in to Bet Against Me you use virtual cash on the site. All the payouts are supported by ads and there Grand prizes in addition to daily and weekly prizes.