Purdue is Purdue again in win over Wisconsin

Share All sharing options for: Purdue is Purdue again in win over Wisconsin 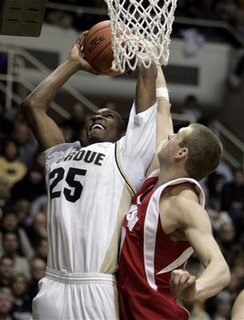 I’m not so sure why I was so nervous about this game. Wisconsin has only won in Mackey Arena once since 1972. It is one of the most sure bets in all of sports even when we were awful under Keady’s waning tenure. I kid with that , of course. Wisconsin is a good team, but one that has shown a tendency to struggle with ranked opponents. With our recent luck we were ripe for them to end that slide.

This was a big win for a number of reasons. Kramer and Hummel played and played well. We got our fist conference victory much too late. We knocked off one of the two remaining unbeaten teams in conference play, meaning we’re really not that far out of the race despite an 0-2 start. We re-asserted our home court dominance. We also fixed the little things that needed to be fixed, at least for one game.

This win was totally in the numbers. We scored 10 more points than they normally allow. We shot the ball better, crashed the boards, and took care of the basketball. Everything that needed to be done in order to win was done. That’s perfect if you ask me.

Sheer intensity – There was a major difference between today and Tuesday night. This team simply looked ready to play. In the opening minutes in State College we looked like we were still on the bus listening to ipods. There was little hustle and it lead to a huge deficit that was ultimately the difference in the game. Today we came out of the locker room with a fire that has been missing for some time. We actually trailed just once by a single point and we were the ones that built the big lead early. More importantly, we kept that lead instead of letting it go like Penn State did. In short, we looked like a good team again.

It is clear that Purdue plays better when it has the right attitude before it comes ont he floor. Unfortunately, I don't know what needs to be done to get that right attitude. It has been missing for long stretches this season, but until the Big Ten season we were able to get by on sheer talent. We need to bottle this motivation and keep it.

JaJuan Johnson – I was listening to Larry Clisby on the radio discussing how Calasan and Johnson would play off each other with both starting. Calasan didn’t have great numbers, but Johnson had another great game. He showed he can runt he floor too with a steal and breakaway dunk. We’re not going to have many games where we have an advantage inside. This was one of them and we actually used that advantage. If we get a game like this from JaJuan in Happy Valley we win going away. Johnson and Green were also key in spearheading a remarkable effort on the glass.

Robbie Hummel – Robbie came off the bench, but it was a nice game back for him. I would like to think this team can survive without him and Kramer, but we’re substantially better with them in there. Robbie found his shooting touch with four 3-pointers too.

The little things – As mentioned above, these things were fixed. To me, rebounding is all about effort. If you want the ball, nothing will stop you from getting it. Today we actually had that effort. We also took very good care of the basketball. Maybe we finally ran out of Crisco for our hands.

Another little thing that actually was a big thing in the end was how intelligently we played defense. Wisconsin is a team that gets to the foul line about 20 times per game. We took what is a huge part of their offense and put it on the shelf. They shot 6 free throws compared to 33 when we played them in Madison a season ago. Marcus Landry had a particularly bad time against our defense.

Finally, Lewis Jackson was critical in forcing the tempo just as I suggested he needed to be. Wisconsin relies heavily on setting up a half court defense and grinding each possession out. The way to beat them is to get the ball up quickly and get faster shots before they set up. LewJack was instrumental in doing just that.

I am making this a shorter entry because there isn’t a whole lot else today. Purdue played like they can play for the first time since the Davidson game. Maybe it was an opponent wearing red uniforms. To me, this game proved that there are very few teams in this conference that can touch us when things are going well. Even today that bad stretches were shortened into gaps that ultimately did not hurt us. If things got close we were able to get the big defensive stop, the critical rebound, or a clutch jumper to end each threat. That is what good teams do.

Now we have to build on this. While there are few easy ones in this conference this year, the next two against Northwestern and Iowa are about as easy as things get. After that we have a tough five game stretch of at Minnesota, at Wisconsin, Michigan, at Ohio State, and at Illinois. If we can take four out of five there we should find ourselves back in the thick of the Big Ten race. Taking all five is a dream, but should it happen we can talk high NCAA seed again.

For now, however, we can celebrate the fact that rumors of our demise are greatly exaggerated.