Purdue heads back to Mad-town

Share All sharing options for: Purdue heads back to Mad-town 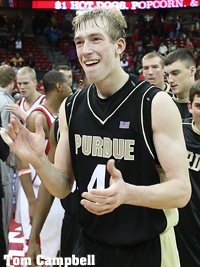 I had promised power rankings today, but I am going to hold off on them for another week. The past 36 hours have been exciting behind the scenes for me at Off the Tracks. There are some things brewing in the works that could be a huge step forward for me personally and professionally involving this blog. I cannot say anything right now, but there could be a major announcement about this blog looming in the very near future.

For now, however, I am all about Wisconsin. I have always been slightly partial to the Badgers because my high school adapted On Wisconsin as its own fight song. To this day any time I hear it when Purdue is playing them I have to remember that it is a bad thing in that contest. Tonight it definitely is a bad thing. I was talking with a fellow Purdue alum yesterday at my dad’s business and I agree with his sentiment. He wanted to get one out of two on this road trip, but after how we played at Minnesota he’s now greedy and wants both.

For those interested, I will have an open thread available for tonight’s game. I am supposed to be covering a high school game up in Zionsville but the weather could get in the way of that. Either way, I will be able to comment along for the second half and I am counting on you readers to carry the day.

There is little argument that our win in Madison last season was the biggest win for the last five years of Purdue basketball. This basketball team showed it was immediately ready for higher expectations, especially with their comments after the game. As I said after that game, we were for real again.

GBI already beat me to it this morning in mentioning that both teams have gone in opposite directions over the past 16 days. Purdue has now won four straight while Wisconsin has lost four straight. Another loss at home tonight would likely put Wisconsin on the sad side of the bubble in a competitive Big Ten. There will be plenty of chances to play off of that bubble, but two would already be gone with another pair of losses to Purdue.

Not a whole lot has changed since the more in depth preview I published two and a half weeks ago. Wisocnsin is still a very good team. They have simply lost in two of the tougher places to play in this conference (Illinois and Purdue) and in a pair of overtime games.

The most glaring loss was probably the Minnesota one. The Gophers are a good team, but the Kohl Center has been a place where no one goes to win except Wisconsin. Minnesota squeezed out an overtime victory after Lawrence Westbrook hit a 3-pointer to send it to overtime. To that point Wisconsin had controlled the game as they often do at home. After that, Minnesota had seized the momentum and was able to parlay it into an overtime win.

It is hard to pinpoint exactly why Wisconsin has a four game skid. The simplest explanation is that they are missing that extra gear they had lat year. That, or the conference as a whole has caught up to them. Against everyone not named Purdue last season they were unstoppable. The won close games and blowouts. They won at home and on the road. They lost Brian Butch, but in reality everyone else caught up to them.

That doesn’t mean we will have an easy time of it tonight in Madison. Sure, we’re the only team in the conference with a winning streak of more than one against them, but they are desperately needing a win. Wisconsin may have dominated the Big Ten last season, but you know some people doubted their championship because they didn’t beat us. They are still one of the teams in the conference that fiercely defends its home court. They are still 148-15 at the building since it opened in 1998. Two of those losses have already come this season, so you get the sense that their fans feel their minute quota of home losses has already been met.

I think the reason we have had such success against Wisconsin recently is that they are simply a good matchup for us. They don’t have overwhelming size to punish like Illinois did. They play a defensive style of basketball that we see every day in practice. They are the worst 3-point shooting team in Big Ten play, behind even Indiana. When you face them you know you are going to get a game where you need to work on the boards and make every single possession count.

One thing we have to look out for tonight was mentioned by Larry Clisby during the radio broadcast at Mackey Arena. Wisconsin shot just 6 free throws in that game, but they are known to parade to the line in their own building. By comparison they shot 33 free throws and made 30 of them in Madison against us last year. Playing defense without fouling will be paramount to our success. If we can do that Wisconsin will have a hard time staying with us.

Many people thought that our meeting earlier this month was JaJuan Johnson’s best game as a Boiler. You can bet he will be a focus of their defense after his 20-10 performance. From what I saw in Minneapolis though I think we can survive this. As I have long said, Purdue will only be successful if we can recognize that the hot hand is going to rotate from night to night. The sooner we find that hot hand and exploit the better we perform. Against Minnesota it was Ironically Lewis Jackson, someone we don’t count on each night for much scoring, that was hitting key basket after key basket.

In the first meeting we also played fantastic defense. Only Joe Krabbenhoft made it to double figures with 13 points. Trevon Hughes was flustered all afternoon in trying to get open. Marcus Landy also had an awful game. Getting those two to remain off their games will be another critical aspect.

Unlike the Minnesota game I have a really good feeling about this one. I think for stretches of the Minnesota game we played some of our best basketball of the season. Everyone was on the same page offensively as we got contributions from more than just the hot hand. As poorly as Landry and Hughes played for them, E’Twaun Moore was worse for us. AS long as we keep playing lockdown defense and keep them from consistently getting to the line I think we win. Purdue 65, Wisconsin 60