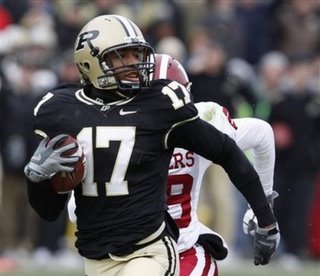 As promised, Here is the continued look at Purdue’s 2009 schedule. I finished the first half with a fairly optimistic 4-2 record. Honestly, the only opponent that truly scares me in that first half of the season is Oregon. The second half here should also be interesting. We drop defending champ Penn State and an improving Iowa team to pick up disappointing Wisconsin and Illinois. To me, that is a huge plus.

October 17 vs. Ohio State (10-2, 7-1 Big Ten) – The Buckeyes have yet to play their bowl game, so their assessment is a bit incomplete. It is hard to make a call because they haven’t had their normal amount of defections to the NFL announced. There will surely be some. Chris Wells would be stupid to return simply because he can get drafted and as a running back he only has so many years before the next guy comes along. If he can still be drafted highly after this season he should go. If he leaves, Ohio State will need someone to step forward and help Terelle Pryor in the running game.

Pryor is obviously a stud to build around, but I expect Ohio State to take a very slight step back simply because they will lose a good amount of talent. The passing game was pedestrian at best this year. Inexplicably, we played them close in Columbus. It was another game we probably could have won if not for our offensive struggles. Ohio State is still going to have a major talent advantage, but the series has been competitive for years. We should expect a loss, but if we can score a meaningful touchdown or two against them for the first time in five years it could get interesting. Prediction: Ohio State win by 10.

October 24 vs. Illinois (5-7, 3-5 Big Ten) – Illinois is solidly going along the same path that it went down after its last BCS appearance. After going to the Sugar Bowl with Kurt Kittner in a breakthrough 2001 season, they followed it up with a 5-7 year. If that continues, they’ll be 1-11 in 2009 like they were in 2003. Illinois had one good win in 2008 against Iowa. To get better they have to have a better running game than Juice Williams. Juice’s passing numbers were better in 2008, but he still threw 16 interceptions. Only five players in Division 1-A had more picks, and all but two of those were guys with a significant number of more attempts than Williams. Illinois is merely average if they cannot run the ball. Arrelious Benn makes them a slightly more talented team than IU’s 2007 squad with Williams playing the role of Kellen Lewis and Benn as James Hardy.

The defense will need to improve as well, especially with top corner Vontae Davis off to the NFL. Good passing teams already had their way with the Illini. Even in games where teams abandoned the passing game like Ohio State did the Illini couldn’t stop the run. All the old problems that were supposed to have disappeared with the Rose Bowl team are back. There is little question the talent is better, but can that talent be coached? This is a game we need to win at home. Prediction: close Purdue win

October 31 at Wisconsin (7-6, 3-5 Big Ten) – There is always one game that feels like Purdue should win, but we end up losing. That is what this one feels like. Wisconsin was hugely disappointing and appears to be slipping back. With them, you always know they are going to be a powering running team first with an upperclassman at quarterback. Dustin Sherer gave them stability late in the season, but he didn’t exactly set the world on fire. The running game loses P.J. Hill as one of many top Big Ten backs who will be off to the NFL, but Wisconsin always has good running backs. John Clay led them in rushing for the season anyway. He will be back.

Facing Illinois is much better than facing Penn State. Getting Wisconsin is better than playing Iowa. Still, I just don’t like our chances going to Camp Randall. Yes they nearly lost to a 1-AA team to finish the year, but I simply do not have a good feeling about this one. We likely could not have ordered an easier Big Ten road schedule. We have to go to the two teams we finished ahead of and the two weakest bowl teams. I just feel like this is the infamous "nothing goes right" for us game like the Minnesota game was this year. Prediction: 7 point Purdue loss

November 7 at Michigan (3-9, 2-6 Big Ten) – If we are ever going to win in Ann Arbor again this is the year. We were the only defense that couldn’t contain their "attack" this season, so it worries me heading up there. Maybe coach Hope can change the attitude of the team. Tiller took several teams capable of winning into the Big House and each one got worked. The successful players that Michigan did have this season like Sam McGuffie are not happy in the program either. McGuffie has already transferred to Rice. Like us, they need a new defensive coordinator. Michigan fans are already accepting next year could be as rough. Incoming freshman Tate Forcier can run the spread better, but he is a true freshman.

This is absurd. YOU ARE MICHIGAN!!!!! Unlike other schools that won’t be mentioned, you have sustained success and still matter in the great realm of college football as a whole. You are giving the guy that just completed the worst season in school history a free pass? Are you kidding me? His "revolutionary offense" was abysmally bad, and would be worse if you take away the Purdue game (still a loss). The fact they are Michigan gives them a chance in every game, but Rich Rodriguez is the most overrated coach in college football. Prediction: Purdue loss (we always lose at Michigan, and its especially frustrating that Toledo and Appy State don’t)

November 14 vs. Michigan State (9-4, 6-2 Big Ten) – Michigan State did not impress me. The only reason we lost to them is because we handed them 14 points. Brian Hoyer was not a confident quarterback and losing a talent like Ringer will hurt. They must replace both players, and Kirk Cousins is the likely replacement at quarterback. Cousins got some time in the Ohio State game and did well, but he is still inexperienced. No one else even had 100 yards for the season rushing, so they must fill a large hole in the running game. That’s a lot of offense to replace.

I don’t know if the defense can do enough to keep this team afloat while the offense gets its feet wet. Michigan State was a good team, but they struggled mightily in games against great teams. Georgia, Ohio State, and Penn State had little trouble against them. Each opponent took away Ringer. The Spartans have not evolved to the point where they can beat you if you take away what they do best. Something will develop along that front in 2009, and if we can take that away we should win. Prediction: close Purdue win

November 21 at Indiana (3-9, 1-7 Big Ten) – I was reading my summer preview of Indiana earlier this week and I see now how wrong I was in my assessment of the Hoosiers. Here is a particularly juicy gem:

Still, the similarities between Indiana right now and Purdue after the 1997 season are eerie. Both teams had just broken 13 year bowl droughts (against Oklahoma State no less). Indiana has the beginnings of a great offensive line like we had in 2000. They also have a singular talent at quarterback that can do everything. An improving defense is also a good step. I wouldn’t exactly make reservations for Pasadena in 2010 yet, but Indiana is better. They are on their way out of the Big Ten basement. At the very least, they are far from the same old Indiana everyone beats up on. They are now a dangerous team that is a threat every week.

That improving defense was awful even by Indiana’s lowly standards. Against 1-A opponents they kept teams under 34 points just twice. They lost six games by three touchdowns or more. I was right in that they were on their way out of the Big Ten basement. They are actually digging a deeper shelter as we speak. It’s more like a NORAD deep inside Cheyenne Mountain level of entrenchment. Just how bad was Indiana? They got beat up by two MAC teams and the Big Ten in one of its worst years. What’s worse, there is little reason for hope in Bloomington after they got drilled by us. I think even if 2009 is a total rebuilding year the Bucket will remain in West Lafayette. Prediction: comfortable Purdue win

Fianl Prediction: 7-5, 4-4 Big Ten) - And why is that not possible? I can see a number of ways it could be more. Michigan, Wisconsin, and Notre Dame are shaky picks over us. An anonymous commenter to part 1 even drew the parallel I have been thinking about for some time. Why can't Joey Elliott be Billy Dicken for us? Theya re very similar right down to the fact they are both coming off of an injury in their senior seasons.

I saw enough in 2008 to know that a few minor fixes, a healthy offensive line chief among them, can lead to a big turnaround.