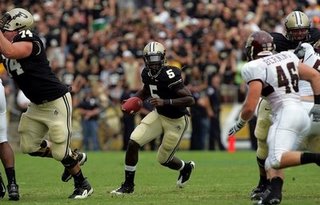 The Big Ten’s awful performance also got me thinking about our own team in 2009. Let’s just say I wasn’t shaking in fear because of teams coming off of dominant bowl wins. The only team with a win (so far), Iowa, we won’t even play again until 2011. There are plenty of reasons to hope (and I am getting really tired of that pun. I need another verb) that 2009 can be a quicker turnaround.

We get many of our playmakers back on defense. If Jason Werner can finally play (and I won’t believe it until I see him on the field) we have the beginnings of a pretty solid linebacking corps of Werner, Carlino, Holland, Golding, and Beckford. Someone else could step in there like Haston or Green. Ryan Kerrigan and Mike Neal are very solid pieces to build with on the defensive line. If Torri Williams decides to try and come back our entire secondary will return. Most of all, we get a new coordinator. Hopefully this new person will realize that in-game adjustments are actuallt legal in college football.

Offensively I wouldn’t mind rotating Elliott and Siller at quarterback. I’d like to see our new offensive coordinator Gary Nord scheme some things up involving both being on the field at the same time. Jaycen Taylor’s return from injury and Al-Terek McBurse’s recruitment gives us some depth at running back. Dan Dierking can contribute. Ralph Bolden has some speed. Frank Halliburton simply needs to be used more. That’s four guys that have experience and one stud recruit. Adding a healthy Kyle Adams will help our receiving corp. Aaron Valentin and Keith Smith are good targets and should be even better. I only question who will step into the slot.

Finally, the offensive line should be healthy and better. To me, this is the biggest reason we struggled in 2008. We never had any consistency with this unit. Some young guys got valuable experience though. Ken Plue will start the next three years somewhere. Dennis Kelly looks promising. Plenty of guys like Jared Zwilling, Justin Pierce, Zack Reckman, and Ryan Prater at least got experience. If we can get a group to stay healthy at the same time things will improve quickly. The fact we didn’t go to a bowl may even be a blessing in that they don’t have practices or a bowl game to get hurt in.

That brings me to the schedule. Here is an incredibly quick look at half the teams we will face with a way too early prediction for wins and losses. If anything, the schedule might be considered easier after we played a pretty tough one in 2008. I do like that it does not feature a single 1-AA game. I'll have a more in depth look when I revive the Know thy Opponent series over the summer. It remains to be seen if I will still be living in Indiana to see this schedule in person, but I will know by the time tickets are due if we will be returning to section 128.

September 5 vs. Toledo (3-9, 2-6 MAC) – You mean we finally get to play a MAC team not named Central Michigan? The Rockets will be breaking in a new coach and their only conference wins were over the two teams worse than them in the MAC (Eastern Michigan and Miami). Still, they accomplished something we haven’t done in 43 years: they won in the Big House. Sure it was a game that set offensive innovation back 50 years, but it was a win. There are some pieces that could cause trouble like running back Morgan Williams who had a 1,000 yard season. We have only struggled recently against good MAC teams, and this will not be one of them. It should say something about how bad Michigan’s offense was when the Wolverines were one of just three teams the Rockets held under 20. They were 3-0 in such games, and 0-9 in the rest. Seven times they gave up 35 or more. Prediction: Purdue win by 14 or more

September 12 at Oregon (10-3, 7-2 Pac-10) – This was one of the most entertaining games of the 2008 season. It was very frustrating because we blew a big lead and that lead could easily have been more. We had them beat, but didn’t put them away. We gained the respect of many Duck fans in the process. Now it is our turn to fly across the country. I am tentatively planning to go to this game because it is such a unique opportunity to see us play in another venue. Oregon looked very impressive in its bowl win over Oklahoma State. Jeremiah Moseli is a dangerous runner and with the plethora of quarterback issues (five guys threw at least one pass and that doesn’t even count that Nick Costa, the preseason starter, got injured and never played) this team suffered they have plenty of interchangeable parts. Jeremiah Johnson graduated with 1,200 yards rushing and 13 TD’s, but LaGarrette Blount returns 1,002 yards and 17 scores. They lose a good portion of their great secondary too.

Call me crazy, but I think this will be a fun, competitive game simply because we did very well against them in Ross-Ade. It was the rare game where the defense gave up 500+ yards and actually didn’t look that bad. If not for Jairus Byrd’s punt return for a score things would have been very different. I think we lose, but it will be a fun shootout. It is a bit of a table-setting game in that they are easily our most difficult non-conference opponent. Prediction: Purdue loss by 7

September 19 vs. Northern Illinois (6-7, 5-3 MAC) – The Huskies went bowling this year because there are a crapload of bowls and they were eligible. That’s about it. All seven losses (save Tennessee) came to teams that had bowl-worthy seasons. One of the wins they used to get to a bowl was against Indiana State. They beat the bad teams they played in order to get 6 necessary wins, so that makes them the Purdue of the MAC. We beat teams like this all the time. The offense is not that great, so if our defense cannot handle them we’re in trouble. Prediction: Purdue win by 14 or more

September 26 vs. Notre Dame (7-6) – The cries they are returning to glory behind Jimmy Montana have already begun. I will say that Jimmy and Golden Tate were very impressive against Hawaii, but it was Hawaii. They were a mediocre WAC team that always plays at home in a bowl if they are eligible. The Warriors had one of the worst offensive lines I have ever seen and made their quarterback run for his life the entire game. The defense was awful too. I should hope the alleged best QB recruit in the country can light up an abysmally bad defense. The least he could have done is not be an ass while doing it.

As far as speculation about 2009 I am going to do what will frustrate the delusional side of their fanbase the most: I will ignore them. I won’t say anything else derogatory, nor will I talk about them at all outside of direct references to this game. I won’t give them ammunition that I am a hater, nor will I stroke their ego by praising them. I encourage my fellow bloggers to do the same and simply ignore them unless they are playing your team or until they do something worthy of their perceived glory.

2009 is obviously a huge year for the Irish. Because of their perception of us panic will set in if they lose. It could be a very interesting game in Ross-Ade. There is little doubt Notre Dame will be ranked somewhere based simply on their bowl performance. I remember the last time we had a new coach facing a highly touted quarterback and ranked Notre Dame team too. This is one of the few games I have no idea what to think about, and probably won’t until I see each team play. Prediction: close Purdue loss

October 3 vs. Northwestern (9-4, 5-3 Big Ten) – The Wildcats proved in their bowl game they were a good team after all. The Indiana loss was clearly of the WTF variety. Pat Fitzgerald provides coaching stability as well because as long as he is successful there is very little chance he is going elsewhere. They’ve got to replace many of their playmakers on offense, but the defense wasn’t that bad. Northwestern doesn’t have as much depth as other teams so it is no surprise they go in cycles. Because of what they must replace they will likely cycle down, but I do think it won’t be as far down as in the past. Lake the Posts tends to agree. Things are building nicely for them, but if we’re going to be successful at all next year we have to beat them at home. Prediction: close Purdue win

October 10 at Minnesota (7-6, 3-5 Big Ten) – Like the Oregon game, I really wanted this one back. I think things would have been totally different had Painter not gotten hurt. Basically we lost because we gave up two big plays that led to both touchdowns. They were plays we probably should have stopped too. Had we done so, we still win 6-3 in an ugly display of offense from both sides. The Gophers lost five in a row after that game, so it is karma for the ass-ish Minnesota fan that sat in front of us and cheered painter’s injury.

2009 should be a better year because they have plenty of raw talent that gained valuable experience this year. They are also opening a brand new stadium. This is the first time since 1960 that a Big Ten team has opened up a new stadium (Indiana and Penn State opened their current venues that year). The fans are incredibly excited about this and Minnesota may actually have a home field advantage of some sorts now.

Adam Weber is a good quarterback, but they have to find other receivers other than Eric Decker and they must get a better running game. DeLeon Eskridge ran for 652 yards but disappeared in the five game losing streak. Weber was the #2 man in rushing with 202 yards. Decker had 1,000 yard season, but no one else had more than 400 receiving. File this one under another close game we must win to have a successful season. Prediction: very close Purdue win