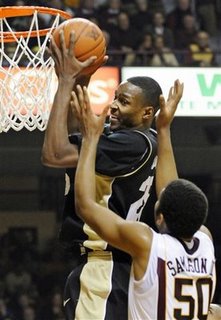 My apologies for having a late post today. I was sub teaching and couldn't access blogger until late this afternoon. This is where I would insert the clip of Darth Vader saying, "Most impressive" as an assessment of Luke Skywalker’s lightsaber abilities during their duel in Cloud City.

Last night’s basketball game was a release both for me personally and for the program as a whole. For me, I needed a good distraction after a very rough day. For the program, we needed a solid win to re-assert ourselves as one of the top programs in the conference. Our previous road performances at Penn State and Northwestern had me skeptical as to our ability to play the better teams in the conference away from Mackey Arena. That skepticism is now gone. Even our opponents were impressed.

In doing last night’s live blog I have some stretches where I went several minutes of the second half without making any comments. I didn’t feel the need to. We were playing so well that I just wanted to sit back and enjoy the ride. A 15-4 run from the 13:35 mark of the second half until the 8:59 mark was the best stretch of play. Unlike previous games, however, there wasn’t an especially bad stretch either before or after it. It was merely a finishing kick rather than a sudden, unexpected burst. In that stretch we had huge 3-pointers from Keaton Grant (expected) and from Chally and LewJack (certainly unexpected). The triple from Chally was an especially large sign that we were in our best stretch of basketball. It was not his best game by far. That 3-pointer is probably the only positive thing he gave us, but it came at a critical time.

LewJack was the key to that stretch. He had five points in it, but had assists on both Chally’s and Grant’s 3-pointers. He was probably the player of the game for us in what will turn out to be a huge win in the long run.

Lewis Jackson – I think this was his best game as a Boilermaker so far. If both he and JaJuan continue to develop as they are right now we will be nearly unstoppable offensively. I can overly LewJack’s five turnovers if he produces like he did last night. Each assist was huge. He had a career high 12 points and finally learned how to make a layup in traffic in the process. This was one of the first games where LewJack really played within himself. It was probably his best game on the defensive end as well. He gives us an offensive element as a distributor that was sorely needed at times last year. The fact he is becoming a more reliable scorer is even better.

JaJuan Johnson – JaJuan played without fear last night. It may not seem like much, but that is essential to our success. We already know that Robbie Hummel (when healthy) is going to score and do a little bit of everything. E’Twaun Moore is going to create his own shot and be the guy that can go for 30 if he gets hot. Keaton Grant is going to find his shot and hit a couple of threes each night. Chris Kramer is going to lock guys down defensively. Those factors already make us a pretty good basketball team. When LewJack is running the offense and JaJuan is playing in the paint without fear we go from good to great. When you add those two factors it opens up our entire offense. Robbie is struggling through his injury at the moment, but we didn’t miss him at all. JaJuan is quickly becoming a player that we can go to when we absolutely need a basket. Best of all, he is a big man that can get to the foul line and actually hit his free throws.

On the defensive end he is likely going to leave Purdue as the all-time leader in blocked shots at the pace he is on. Right now he trails only Ohio State’s Dallas Lauderdale with 2.5 blocks per game for the conference lead. In Big Ten games only he is averaging 3.2 per game, nearly one block better than anyone else in the conference. Lately it seems like he is rejecting anything he can get his hands on within five feet of the basket. This makes a huge difference not just with his actual blocks, but with the shots he alters because of his mere presence. How many wild layups did Al Nolen miss last night simply because JaJuan was there? For each block it seems like he alters 3-4 more shots into misses. As much as Kramer disrupts other teams from getting into an offensive flow JaJuan is just as valuable by not allowing easy baskets. The fact he is becoming a major factor offensively is just an added bonus.

E’Twaun Moore – E’Twaun was a major factor last night simply by being E’Twaun. He created his own shot when necessary and beautifully utilized his pull-up 15-footer. He didn’t score in bunches, but that is what made his 16 points seem like more. Each basket came at a critical moments that either started or augmented a big run. E’Twaun hits the mid-range jumper that has become almost a lost art. Too many teams settle for either lay-up or 3-pointers. The game of basketball has gotten to the point that the 12-15 foot jump shot is almost deflating to defending teams when the opposition hits it. I know this because it is the one shot I can hit with startling accuracy, yet I might get one attempt per game when I get the chance to play. The fact that E’Twaun can hit this means teams really don’t know how to defend it.

Focus – Unlike the Northwestern and Penn State games we were focused from the beginning. This allowed us to do two things: First, it let us play stifling defense and force Minnesota into shots they didn’t want to take. Second, we quieted their crowd before they could even get into the game. It was almost like it was a reverse Duke effect. When we played Duke they quickly took our crowd away. You could tell we were begging to get back into it, but we never had a chance to. The same happened last night with Minnesota. Though they were dying to get loud, they never had reason to.

Bob Knight – I made this comment last night in the GBI forums, but I actually liked listening to Bob Knight as a color commentator. He was the rare color guy that actually brought something to the table and added to the broadcast. Speaking strictly as a basketball fan I have always respected his knowledge and passion for the game. It is simply unfortunate he had to become a legend at Indiana of all places. He is clearly one of the greatest coaches ever and I certainly respect him for never giving an inch in doing things his way. He is a man that if you respect him, he will show you respect in turn. Last night he showed an enormous amount of respect for our basketball program and I look forward to watching more games covered by him in the future.

I don’t really have many negatives from this game other than the fact that we let Minnesota stay in the game from the foul line. Even then, I never had a feeling that we were about to lose control. We had an answer every time they made a push and that is what good teams do. This game is right up there with Davidson in likely being our most complete performance of the season. We looked like the highly ranked team we are supposed to be last night, and the scary things for everyone else is that we did with our supposed best player struggling through a back injury.

Robbie’s injury is a concern for me. We already have our second bye this week after just six conference games. That means we have 12 very tough games before the Big Ten Tournament. This is his last chance to get some extended rest and heal before a pretty brutal run. If we have an extended run in both the Big Ten tournament and the NCAA’s that could mean up to 19 games or more without a long period of rest. Can he hold up for that long?

Speaking of the NCAA’s, I think last night’s win all but sealed a bid unless we totally collapse. I know it was thought of as a formality long before the season even began, but after dropping the first two Big Ten games and seeing how strong the rest of the conference was there had to be a little doubt. We now have 15 wins with three quality victories away from Mackey Arena (Boston College, Davidson, Minnesota). We will be very hard pressed to not make the tournament now. That means we are playing for a seed.

This team appears to have woken up after the close call at Northwestern. With the way Northwestern has played since then event hat is a quality win now. Shoot, they are currently ranked 39th in CBS’s RPI. That’s higher than Boston College at 56. Penn State at 85 is our "worst loss". Illinois, Oklahoma, and Duke are all in the top 20 RPI-wise at the moment. We have had two very solid games since narrowly beating the Wildcats. I predict that if we can keep playing like this and win the next four we will control our own destiny again for the Big Ten title. With that I think a top four seed somewhere in March will be easy to obtain.

For now though we must rest and heal. Let’s get some of the best medical care for Robbie Hummel’s back, Chris Kramer’s foot, LewJack’s knee, and Keaton Grant’s shoulder. A week off for all of them should do wonders before a tough trip to Madison.