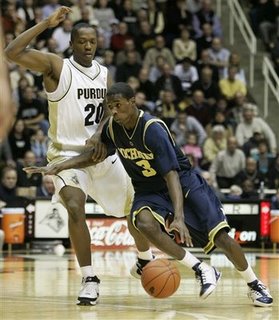 Before getting into the Michigan preview I wanted to thank everyone who has come up with suggestion for a new name over at SB Nation. While Communism works in theory, I prefer a good old-fashioned democracy. Off to the side you will notice a new poll with my five favorite choices culled form the list I was given. I've give it about a week, and whichever name you readers pick will be the new one over at SB Nation. As mentioned, I will be leaving this site up with occasional different updates in order to keep some advertising obligations I have made, but for the most part everything will be done over at the new site. One thing they require is an open thread post for each game, so that will be a constant for football and men's basketball.

One of the names that was suggested the most was Boilermakings. While I really like this name, I know the GBI print edition has it on the last couple of pages. The last thing I want to do is piss them off since they are officially backed by Purdue, so I felt like I needed to cut from the list. Unfortunately many of the other really good suggestions were already taken domain-wise.

One note I forgot to mention in yesterday's mini-boilermakings: Kory Sheets participated in the Senior Bowl last Saturday as a replacement for the injured Jevon Ringer and made a couple of very nice plays. He finished with the longest kickoff return of the day and had had 31 yards rushing, good for the second highest total of anyone. He also had a touchdown, but it was called back due to a penalty.

Alex Magee also played and had an assist on a tackle. Though he didn't do much in the game, Sports Illustrated felt he had a fantastic week of practice and may end up going late in the first round of April's draft. That would give a modest streak of three straight seasons with a first round draft pick after going almost 20 years without one.

It is very hard to get a read on Michigan this year. They have two of the best non-conference wins of anyone in the country by beating Duke and UCLA, but they have struggled in some other games. Since getting into Big Ten play they have been swept by Ohio State, giving the Buckeyes a major edge if both teams end up on the bubble. The Wolverines haven't been dancing in 10 years, which is the longest non-Northwestern streak in the conference. Many thought that the victories over Duke and UCLA were going to assure that streak would end, but they need to improve in conference play to give those wins more value.

Outside of Ohio State Michigan has struggled in Big Ten play with losses to Penn State, Illinois and Wisconsin. They are doing themselves no favors by going 1-4 on the road in conference play. The one win came in overtime at Indiana, a game in which the Hoosiers blew a 20 point second half lead. To me, that tells me that win belongs more to Indiana blowing it rather than Michigan making a great comeback.

Michigan's success comes from the fact that they have two of the best players in the Big Ten in guard Manny Harris and forward DeShawn Sims. Harris is a candidate for Big Ten player of the year with one of the best statistical profiles of anyone in the conference. He is second in scoring (17.8 ppg), second in rebounds (7.8 rpg, tied with Sims), and sixth in assist (4.5 apg). Penn State's Talor Battle leads in both points and assists, but he doesn't have the rebounding ability that Harris does. Harris is a definite playmaker that we must keep our eye on. He has had as many as 15 assists in one game, so he can do plenty of damage without scoring himself.

Sims (15.7 ppg, 7.8 rpg) is plenty good in his own right. At 6'8" 235 lbs he is developing into one of the premier power forwards in the Big Ten if not the country. His game reminds me a bit of Carl Landry's because he can step outside and hit the occasional three. His best game came against Florida Gulf Coast when he had a 20-20 game of points and rebounds. He hits better than 50% of his shots from the field and is a 75% free throw shooter.

The biggest news for Michigan is that it will be missing the services of Freshman starter Zack Novak. Novak is a guy we recruited from Chesterton, Indiana and he averages 6.7 points per game as a 3-point shooting threat. He'll have a seat for this one as he was ejected from Wednesday's loss at Ohio State for elbowing P.J. Hill in the face. That drew a one-game suspension that he will serve Saturday.

Freshman guard Laval Lucas-Perry (9.3 ppg) missed the first nine games of the season but has come on as a nice compliment to Sims and Harris. He was in double figures for the first six games he played in, but hasn't had more than 8 points since scoring 18 against Indiana. A big reason is that he hasn't been hitting his 3-point shot. Since the Indiana game he is just 5 of 25 from long range after going 16 of 35 before that.

Missing Novak will cut into Michigan's regular nine man rotation. Senior forward Jevohn Shepherd, who has played in 18 games but hasn't logged many minutes in Big Ten play, will likely see more playing time as the result of the suspension.

Defensively we can expect to see a team that thrives on creating turnovers and getting transition baskets. We top the league in forcing 16.2 turnovers per game while Michigan forces 14. Michigan's half court defense isn't very good as only Indiana has a worse field goal percentage for opponents.

This feels like a very good matchup for us. Michigan is primarily a team of Sims and Harris. If we can contain one or both of them it will greatly increase our chances of winning. Conversely, if both of them go nuts suddenly Michigan is a very good team. We must concentrate mostly on Harris. He has a tendency not only to score in bunches, but to get his teammates involved as well with his playmaking ability. Sims is a dangerous player in his own right, but Harris can do so much more with the way he distributes the ball. Just as our defense on Al Nolen in the Minnesota game disrupted his ability to get his teammates involved, we have to make sure Harris doesn't do the same.

In both games last season we did a good job of keeping Sims off the glass. With Harris, we held him to just three total assists. He had 25 points in the game in Mackey Arena, but he finished with just 10 in Ann Arbor. Short of the Big Ten Tournament game against Wisconsin it was one of his worst outings of the year.

What is also encouraging is that Michigan's defense has been significantly worse in Big Ten play. In conference games alone teams are shooting 49% from the field, though for some reason teams don't shoot as well from the free throw line against them. On the other end, Michigan has the worst field goal shooting percentage (39%) in league games. They only hit 30% from 3-point range as well.

If it was just one or two games I would say it was a fluke, but the Wolverines have established a poor trend in Big Ten play. We're talking about the worst shooting team in the league going against a team that makes opponents shoot we below their average. To me, that is a huge advantage we must exploit. If we simply play defense as we have been playing we should have a surprisingly easy time. Part of that may come from the fact that this is their 6th road game in 10 conference games. I feel like all we need to do is play our game and keep them off the free throw line.

Much of basketball is about matchups. This looks to be a very good matchup in our favor as long as we play our game on our terms. That's what good teams do. During this stretch of four road games out of five we cannot afford a let down in the one home game we have. Michigan State looked like Michigan State again last night, so their loss to Northwestern was more than likely a poor night rather than a trend. To keep pace with the Spartans this is a must win, and I think we will get it. Purdue 67, Michigan 53.

This is an easy one. With one Boiler (Chike Okeafor) and two Canes (Antrell Rolle and Edge James) we're unanimously going with Arizona on Sunday in my house. Chike is a good guy, a 10 year vet, and is more than due to have a solid payoff to an unheralded career. The townie from West Lafayette High will become the latest Boiler to get his ring Sunday.

Also, as many of you know, online shopping eliminates much of the hassle of going tot he mall, finding a parking space, and fighting the crowds. That is why I like to shop online at a place where I can find nearly anything.

With summer just around the corner it is time to gear up for outdoor activities. Every biker needs good shoes, equipment, and clothes to bike in comfort.