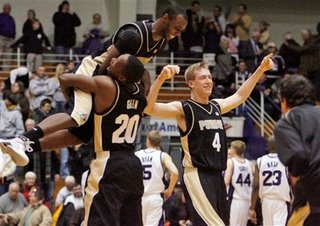 That’s the only explanation for that win. I only saw the second half, but the first 14 minutes of that half told me enough. Those 14 minutes were among the most infuriating I have ever watched. My incessant pacing and ranting actually sent Mrs. T-Mill out of the room (hard to do in a two room apartment) to watch the Office. Defensively we were getting called for every little ticky-tack touch foul, so much so they were in the bonus for the last 14 minutes of the game. On offense we had the return of Crisco hands and our inability to break their 1-3-1 trap was maddening. It’s not that hard. When they close the trap on the guy that picks up the dribble 35 feet from the basket we have to have everyone else move without the basketball. Instead, we stood around like lawn statues expecting the guy to make an impossible pass.

We were playing poorly, but I must give credit to Northwestern on the defensive end. They were doing a brilliant job of switching and trapping. They played like there were nine of them on the floor at times, denying us anything within 25 feet of the basket. They did such a good job that I still have no idea how we made that comeback. Even after the gift of the intentional foul on Kramer’s drive we still allowed the lead to balloon back up to 12 at one point. That’s when I though we were done.

This game could be a wakeup call. We have not been a good road team this year. In just three true road games we struggled offensively against a middle of the road MAC team, lost at Penn State, and barely escaped against Northwestern. The resiliency shown in this game can go a long way toward winning games in some much tougher venues. The remaining seven road games will not be this easy.

Positives from the Northwestern game:

JaJuan Johnson – For the second straight game JaJuan absolutely owned everything within five feet of the basket. His biggest play was not one of his blocks, but the tip he had with 1:47 left that kept the ball alive for Hummel to come swooping in and tie the game. He even did the smart thing by trying to miss the final free throw. If he is successful there, Northwestern has no timeouts and has to go the length of the floor in 2.2 seconds. At that point, if a guy throws it in the basket from 70 feet you just tip your cap. As it was, Northwestern got the ball in the hands of the best 3-point shooter in the league with an open look from about 28 feet. That’s not JaJuan’s fault though. At this point I’ll just take the point.

Coach Painter has taken some flack lately for some in-game decisions, but the one to give the ball to JaJuan in the last few seconds was absolutely the correct one. It shows just how far JaJuan has come that we know he is a major advantage in the paint with the game on the line. He was either going to score there or get fouled. He wasn’t fouled on the shot (it was clearly before the shot) but he got two shots anyway because of the double bonus and hit them in a pressure filled situation. As Steve Lavin said during the broadcast, he had a chance a few weeks ago to beat Illinois with a free throw and didn’t get it. That’s how much JaJuan has grown in 16 days.

Chris Kramer – This team is much better when Chris looks to get involved offensively. As mentioned numerous times before, if he can become a threat it makes guys like Hummel, Moore, and Johnson that much more dangerous. Two of the four field goals Chris made were absolute circus shots. You can’t count on those all the time, but they were huge in the end.

Rebounding – 39-23. Northwestern runs an offense that lives and dies on the success of one shot per possession. Our defense did a pretty good job of taking away the backcuts, but 3-pointers were still big early on. When we adjusted during the run we took that away. Rebounding comes into play here in that we didn’t allow them to get second chance points. E’Twaun was especially effective here by securing multiple boards late. His 10 rebounds were a lot bigger than his eight points.

Keaton Grant – I have really gotten on Grant of late, but his play has deserved it. It looked like more of the same from what Scotty Leisure said about the first half, but man did he hit two absolutely huge 3-pointers in the final minutes. Keaton also finished with 6 assists. Those threes were probably the biggest shots he has hit all season. We weren’t getting good looks from long range. His first one was especially true as it was a "Why did you take that, it’s too dee- I guess it’s not too deep!" type of shot. It’s appropriate that that was the shot that started the rally, and the second triple was the one that gave us out first lead.

Crunch time defense – The only field goal Northwestern had in the final five minutes came on Coble’s cut to tie it with 47 seconds left. The rest of the time we did a great job of forcing bad looks and grabbing the rebound. How we defended that 3-on-1 in a tie game with 20 seconds left is beyond me. The subsequent scrum at the other end and loose ball recovery was sheer guts as well. Both were cases of being lucky instead of good. Our defense also had the handicap of not being able to use their feet to deflect balls like Northwestern was allowed to do twice.

Robbie Hummel – Robbie played like the Big Ten Player of the Year in the final minutes. Even after the ESPN2 crew banged home the free throw jinx (3 for 3 on the night, leads Big Ten at 90% for season) just before his miss he came up with a big 3-pointer and the tying putback. We needed him to step forward and play and he did just that at the absolute right time.

Negatives from the Northwestern game:

Turnovers – Where do I begin here? At the rate we were going at for awhile I thought we were going to finish with 30 turnovers. I can’t give enough credit to Northwestern’s defense though. They did a great job of forcing us into multiple jump passes per possession. Still, we helped them by not moving without the ball and helping the guy in the trap.

The officials – I am not like my mother. To her, every basketball loss for Kokomo, Purdue, the Indiana Pacers, or any other team she wants to watch is directly the result of the officials. I am the opposite. 99% of the time officiating rarely has an impact. Tonight though… There were at least two turnovers caused by Northwestern kicking the ball, but Ed Hightower wouldn’t call a kicked ball in a World Cup soccer match. We had too many touch fouls that weren’t called at the other end. Things were a little one-sided, but the key calls (the intentional foul) were the right calls.

Offensive flow – We simply cannot afford to have any more games where it takes us 35 minutes to get into some kind of offensive flow. Part of this was caused by Northwestern’s defense, but it still took us way too long to realize that we could get the ball inside to Hummel and Johnson any time we wanted to if we could just break the trap. That all comes from moving without the ball.

We did not win this game. Northwestern lost it. We were dead and they simply could not finish things off when they needed to. They got a little too conservative on offense, didn’t get good looks when the shot clock ran down, and got on the wrong end of clutch 3-pointers by Hummel and Grant. We hit every big shot we needed to hit. We got every critical loose ball down the stretch. We also hit our free throws and they did not. The Wildcats’ last six trips to the free throw line ended with one make and one miss. That is six points left on the floor in the final nine minutes.

We can build on this though. Good teams find ways to win games they have no business winning. Bad teams find ways to lose games they have no business losing. It is plain to see who the good team was and who the bad team was tonight. I feel sorry for Northwestern because they played more than well enough to win for 35 minutes. They had a 10 point lead with six and a half minutes to go, but got outscored 18-6 in those six minutes.

I’ll take it though. It counts the same in the standings as a win over Michigan State. We avoided a "bad loss" that would have caused problems with our seeding in March. The Big Ten Conference is back to the point where any road win is a good one. Michigan State already struggled in winning at Northwestern earlier this year. Even Indiana has proven to be a tough out in Bloomington. Northwestern is going to win its share of games this year if it can simply learn how to finish. For now the Tweak comparison from earlier in the week remains true.

Tonight we did learn how to finish though. This was very similar to the game that I covered on Tuesday night. In both cases the winning team didn’t even have the lead until the final minute or so. It is imperative now to get home and defend the home court against Iowa to get on the plus side of the Big Ten ledger.