Chaos! Panic! I love it!

Share All sharing options for: Chaos! Panic! I love it! 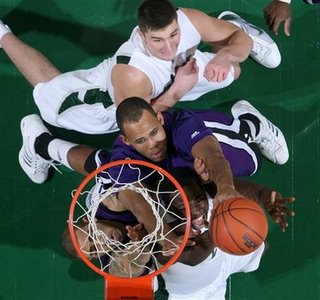 I was originally going to save today’s entry for an open thread during tonight’s game, but the events of last night prompted me to comment on much larger matters. Last night is a prime example of why I love the game of college basketball.

Absolutely no one is safe anymore. The only undefeated team in the nation lost at home. The only winless team in the nation, in the midst of a 51 game losing streak, finally won a game for the first time in almost two years. NJIT’s streak can’t even be put into proper historical perspective. Since they are in the final year of reclassifying from Division II the 51 games can’t be considered the longest Division I losing streak. That "honor" still belongs to Sacramento State at just 34. Ironically, Sacramento State now inherits the longest active losing streak at 13.

Just about the only constant that remained was North Carolina’s home court dominance over Clemson. Close to home, the biggest news was Northwestern’s massive upset over Michigan State. Virginia Tech is a good team and NJIT had to win some time, but absolutely no one expected the Wildcats to go into the Breslin Center and win a game. That is especially true with how well Michigan State had been playing of late. In reality, the Spartans had avoided a number of close calls. Illinois and Penn State had chances to pull upsets in their final two games but were unable to do so.

This throws the entire Big Ten race into disarray. Do not laugh, but you have to even consider Northwestern a threat to make the NCAA Tournament right now. It is not as far-fetched as things seem. If the Wildcats can just win the games they are expected to win (two against Indiana and Iowa each, as well as a non-conference game against Chicago State) they will suddenly be at 15 wins. They already have quality wins in Minnesota, Michigan State, and Florida State, so if they were to find five more somewhere else it is possible.

Even Iowa isn’t totally dead after showing impressive resiliency in beating Wisconsin in overtime. Every non-Indiana game in this conference is going to be an absolute war the rest of the season. This could easily be a year in which the conference gets seven and maybe even eight teams into the NCAA’s. Here is my breakdown of who is currently safe, who is on the bubble, and who has work to do but is still alive:

Michigan State – Last night’s stumble aside, the Spartans have done more than enough already to merit a bid. I am still considering them the conference favorite. I can’t see them losing more than four conference games, which would easily put them in with 24 overall wins.

Minnesota – For now the Gophers are safe barring a collapse. There still needs to be something said for going unbeaten outside of your conference these days. They will get a lot of mileage out of the Louisville win, and they still can grab 2 or 3 quality wins in conference. Just not tonight, please. FYI: Minny-centric previews of tonight's game can be found at the Daily Gopher (there I did a short Q&A) and at From the Barn.

Illinois – I’d feel better if they could have finished the job against Clemson, but Illinois already has 16 victories and a nice road win at Purdue. The split with Michigan was good and they have an impressive win over 16-3 Missouri as well. There is no way they won't win at least four more games, especially with one at IU.

Purdue – I was tempted to put us on the bubble, but for now I will leave us as the last "safe" team. If Boston College can get on another winning streak it will help even more. Obviously Davidson is a good win too. We really don’t have what you would call a "bad loss" and won’t unless we lost to Indiana at this point. All four losses are to possible at-large NCAA teams. If 20 wins is the benchmark for making the tourney I can guarantee we’ll win six more games.

Penn State – The Nittany Lions need to do a better job of playing on the road. They can get to 20 by simply winning five winnable remaining games at the Bryce-Jordan Center, but a non-Indiana road win would do wonders for them.

Ohio State – This is the one team in the conference that has a shot to make it with less than 20 wins. The three game winning streak over Miami, Notre Dame, and Butler is about as good as it gets, especially since only one of those games was in Columbus. A 10-8 conference finish would give them 10 wins overall and probably put them in.

Michigan – A week ago I probably would have had Michigan in the lock category, but not anymore. Not only have they lost three in a row, they barely bothered to show up in road games at Penn State and Illinois. Both are teams they are fighting for a potential bid. Saturday’s home game against Northwestern is now huge for both teams.

Wisconsin – I think the aura of invincibility in the Kohl Center is gone. They too are on a three game losing streak, but the last two were in overtime. Seven more conference wins to get to 20 may be hard to come by.

Northwestern – As mentioned above, you have to at least consider them, even if they are a longshot. They just got the best conference road win you can get this year. They are proving that Welsh-Ryan Arena is a difficult place to play. Their style is simply so different that they may be able to pull off an NCAA bid. Unfortunately they could really use the Penn State and Purdue games back now. 12-4 and 4-2 in the Big Ten would have them up one tier.

Iowa – The win over Wisconsin last night gives them a bit of a reprieve, but they have the most work to do of anyone with a semi-realistic chance. They are still probably a year away. Even a 5-7 finish down the stretch probably gets them into the NIT as a consolation.

Indiana – Expect a large number of firsts (such as Penn State’s first win in Assembly Hall) and long IU winning streaks to be broken the rest of the way. February 4th when Iowa comes to town may be the best chance for the Hoosiers to win a conference game. Everyone is counting them as an automatic win already. I originally thought they’d be able to sneak one or two wins out of this schedule, but the rest of the conference looks just too tough. At least they beat Ivy League favorite Cornell.

Bear in mind that this is a very early projection. We still have the Big Ten Tournament in Indianapolis that should be an incredibly fun four days. I expect by that time that the five teams that don’t have to play on Thursday will have already locked up a bid and will be playing for seeding. At that point there will be between two and four teams needing a couple of wins to secure a place. Since almost every win this year is a good win it could mean that an Illinois-like run of three wins before falling in the title game will steal a bid. There is also the auto-bid out there for the taking, as Iowa knows very well. The Hawkeyes are the only team to win four games in four days, doing so as the 6 seed in 2001. Illinois has twice made the title game as a double-digit seed.

For Purdue fans thinking we can use it as additional help don’t expect it. Our Boilers have the worst record in Big Ten Tournament play. We’re tied with Northwestern at 4-11. Two of those wins came when we made the final of the first Big Ten Tournament in 1998.

Note: I am planning an open comment thread during tonight's game, but Blogger is telling me there will be a scheduled outage at 4pm Pacific time. That's right at tipoff, so we will see if I am here.