Breaking Even in the Windy City

Share All sharing options for: Breaking Even in the Windy City 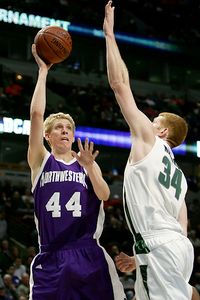 Special thanks today to Lake the Posts for providing the bulk of today's content. This will be the bulk of the Northwestern preview for a number of reasons. First, today is actually my fourth wedding anniversary so I have dinner plans this evening. Second, my grandmother passed away at 1:15 this morning, so I am hastily making travel arrangements to get to South Carolina by 10:30 Saturday morning. Four years ago at this time I was in Vegas getting ready for the wedding and a night on the town with my new wife, my best friend, and her best friend. In all, it was much better than sitting here making travel arrangements and freezing my ass off. I'll try to do a live blog during the game tonight once again, so feel free to stop by and comment along with me.

In the meantime, Mike was nice enough to answer some questions about the Wildcats before tonight's game.

Off the Tracks: Northwestern got off to a surprisingly good non-conference season, but has struggled in conference play. What gives?

Lake the Posts: For the first time since Jitim Young ran point, there was genuine enthusiasm about hoops at NU. Most fans were calling for Carmody's head at the end of last season, but thanks to assistant coach/former player Tavaras Hardy, NU landed it's best recruiting class possibly ever. Fans were taking a wait and see approach and fired-up about the size and height we got in the post with all of our frosh being at least 6-8. The non-conference schedule was littered with pansies and sprinkled with some "good name, average team" challenges. We led at Butler by double-digits before forgetting how to shoot FTs and lost by four, and lost in a close one at Stanford to account for the two (respectable) losses (Ed. note: Losing to Butler is certainly respectable, especially consider you had the guts to come to Hinkle Fieldhouse. That's just a magical gym). Our big wins were two blowouts of then-undefeated Florida State and city rival Depaul in back-to-back games. These two wins were the ones that raised eyebrows as we simply don't smoke anyone, let alone teams from legit conferences. Cautious optimism reigned. Once we entered Big Ten play we seemed to have forgotten the fundamentals of rebounding and scream of a team that does not know how to put a team away. In the opener we were up double-digits at Penn State in the second half and started to go the hoops equivalent of prevent and lost by four. It was a crushing loss and it has been all downhill since.

OTT: You guys run the Princeton offense, something that smaller schools can cause problems with in the Big Dance, but it has yet to garner sustained success in the Big Ten. Is this Carmody's last chance to make an impression with it?

LTP: The Princeton offense is actually run by Georgetown very effectively in the Big East. The major difference is the Hoyas are much more physical with it, using hard-hitting screens and the like where we are not. The offense is the ultimate catch-22. You have a decided talent disadvantage so you try to neutralize teams by dictating tempo and taking them out of the game. However, it takes a special kind of high school kid to say "I want to go play in a system where the team scores 60". Is it the system or the talent? I'd say talent. Most true fans believe if Carmody doesn't go over .500 he's gone.

OTT: What, in your opinion, will it take for Northwestern to finally get into the NCAA Tournament? An Act of God is not a choice (sorry).

LTP: It truly is amazing isn't it? We hosted the first damn tournament and didn't even invite ourselves (1939!). We finally have the actual ingredients - a solid point guard, a killer 3-point shooter, a scoring swingman and size in the post. The only problem is the post players are a year or two away from developing into gamechangers. In talking with insiders and those close to the program, the academic restrictions are tough. I'm by no means an expert, but those "in the know" tell me Duke and Stanford are much more lenient than we are. When I retort with "explain football success" I get answers that I don't buy. When you hear E'Twaun Moore in a postgame presser after last year's win in Evanston say he wanted to put a show on because he wanted to go to Evanston and they wouldn't recruit him it makes you cringe. (Ed. Note: Thanks!)

The pervasive thought among coaches is that NU is career suicide. If you're an up-and-comer then you're career will likely stall. If you're a proven coach, why take on that challenge? I'm confident our new AD, Jim Phillips will do what it takes to change that perception. Duke and Stanford have set the model and it is truly about finding the right coach. Carmody is a great hoops tactician, but he is not the guy that inspires run-through-the-wall play. I wish I had the answer, but I don't. Do you? (Ed. Note: Sounds like that Act of God might be needed...)

OTT: What will the keys to a Northwestern victory over Purdue be?

LTP: Rebounding as always will be the key. The other one is not letting the best defensive player I've seen this decade, Chris Kramer, not clog the start of our offensive flow. He is a game-changer and we need to free ourselves from his smothering defense to ensure he doesn't single-handedly change the tempo of the game. Obviously, we need to be aware of Hummel everywhere as he seemingly is the ultimate dagger with his timely shooting. The blueprint to beating NU is no secret though...patience on "D", bottle-up Craig Moore from "3", force us into bad shots at the end of the shot clock by denying Moore and crash the offensive glass like hell.

I also wanted to thank everyone who came up with other creative character analogies for Indiana from the South Park entry. I am still laughing from the Randy Marsh analogy. I admit, I mostly went with Officer Barbrady because of the picture alone.