Another one slips away

Share All sharing options for: Another one slips away 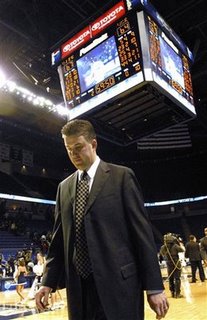 I went to bed angry last night. I was angry because we let another game get away in which a couple of small fixes would have meant victory. I was mad because I knew we were the better team, but we folded yet again. After clawing back to take a five point lead we proceeded to not score a single point for eight minutes. Penn State didn't even play particularly well in that stretch. We had multiple opportunities to build on our lead, tie, or cut into theirs that we missed. The difference in the game ended up being a crazy bounce on a 3-pointer by Morissey that somehow found the bottom of the basket. It was almost appropriate. Every loose ball situation went the way of the Nittany Lions, so why wouldn't they get that crazy bounce?

Speaking of those loose balls, can we please get some talcum powder or something on the sidelines? I am really tired of us looking like it is a requirement to dip our hands in Crisco before stepping on the court. This is just getting ridiculous. Marcus Green cost us three points when he was all alone, had three teammates around him, and four Penn State players were already running to the other end of the floor because he couldn't corral an easy rebound. The one trailing Penn State player grabbed the ball, scored, and was fouled.

It is not a difficult concept to master. Penn State was so good on the offensive glass because they instantly brought the ball into their body any time they came near it. Aside from horrible boxing out issues, we have continued to avoid doing this all season. We constantly reach for the ball and try to secure it only with our hands. Most rebounds we do get are knocked around 2-3 times before someone finally grabs it. The ball slips around our hands as if we're trying to corral a live eel instead of a basketball. One comment I had during the game last night was along the following lines: I would hate to see the bathroom in our locker room. There is probably pee all over the place because these guys couldn't even hold their own junk. If I am coach Painter I have practice today involving nothing but securing the basketball when it is loose.

There are some positives from this one, but mostly negatives.

Paint Crew - You kids deserve your own positive. Thank you for representing Purdue on the road in the upper deck. You were louder than the four Penn State fans in attendance. You have my undying respect, everyone who made the trip. You have no idea how envious I am of you.

E'Twaun Moore – Moore's performance at times in the second half reminded me of when he took control of the Illinois game in Champaign last year. He was hitting from long range and creating his own shot by going to the basket. If we can consistently get him 15 foot looks we might as well keep putting 2 points on the board. Penn State was begging for us to drive to the basket and E'Twaun, even if only for a few moments, was happy to do so. Unfortunately, we went away from him when he was at his peak. During the critical eight minute dry spell I think he barely touched the ball and took just two shots. When it became more obvious with each passing possession we needed a basket to break the drought his importance in the offense diminished. This is the product of poor coaching down the stretch. Already short-handed, we needed to get the ball in the hands of the one player who can make a difference by himself. Instead, we kept giving the ball to the increasingly ineffective Keaton Grant.

Nemanja Calasan – Chally did a great job of playing within himself and not forcing too much. He was strong when he needed to be strong and showed some nice range with a big 15-footer midway through the second half. I can only think of one dumb 3-pointer he launched, and a couple of passes that were good ideas, but poorly executed. We had moments where he and Johnson were on the floor that we refused to pound the ball inside. Coach Keady was begging for us to in the broadcast. I don't know how much it would have helped because JaJuan had a pretty ineffective game.

Mental Toughness – Part of the reason we struggled so much after taking the lead last night may have come from simply running out of gas. We fell behind 14-0 on the road without two of our best players, yet we came back to take the lead and really were in full control at that point. We were hitting our shots, played well offensively, and we were even rebounding at that point. While mental toughness was critical in making that comeback, it all just fell apart for no reason after that. Once we took a five point lead we didn't score at all until LewJack hit a 3-pointer with just under 2:21 left. There is no excuse for that. There is no excuse for not even getting one drive to the basket in order to get to the free throw line in that stretch. We shifted from playing well to playing poorly in an instant.

Bench contributions – I already mentioned Chally, but Riddell and Smith each played some good minutes last night. They had some mistakes, but they were less liabilities than other guys like Johnson and Grant. Each had a big 3-pointer to keep us alive early on. We didn't need 15 points from each in order to win. We just needed solid contributions. They knew that and performed their roles well.

Turnovers – the numbers don't reflect this, but there were a number of offensive rebounds gathered by Penn State that should be counted as turnovers. I would count every single rebound (and there were many of them) that Crisco-hands came into effect and the ball dribbled to a Penn State player as a turnover. Effectively, it was like giving them another possession. For a team that is supposed to be among the nation's ten best our ball security is atrocious. Again, it's not a hard concept to understand. There is the ball, go grab it. Rebounding is 90% effort and willing yourself to get the ball before the other guy. We do not have that effort.

Failure to attack the 2-3 zone – If there is one thing I know it is the 2-3 zone. My high school coach won more than 650 games and two state championships with a clamp-down 2-3 zone. I have seen it so much that I can tell within two possession if a team knows how to attack it well. We do not know that. They weren't even running a true 2-3. Instead of quicker passes, dribble penetration, or placing Calasan/Johnson on the low block to disrupt the zone we panicked and shot 3-pointers over it. This only works if you make the shots, which we didn't. A 2-3 is difficult, but not impossible to break. We didn't even try.

Keaton Grant – Keaton had a couple of big shots early, but he continues to be an offensive liability. I had hoped he was finally breaking out of his slump too. Too many possessions ended with him turning the ball over or forcing a bad shot. Sadly, we went to him instead of Moore at the end. I have preached for a long time about sticking with the hot hand regardless of who it is. It baffles me why we didn't last night.

Matt Painter – There has to be at least some criticism of him at this point. During the open thread last night one of the comments mentioned that Painter did not do a good job of substituting down the stretch. Riddell and Smith had proven they could spell some guys for a minute or two, yet they were not utilized as the offense was struggling. They have even proven they can hit the open jumper. We were already short-handed, but he made a bad situation worse to the point that the starters were out of gas at the end. Painter's insistence to go away from Moore and to Grant confuses me as well. The same is true for refusing to attack Penn State's weakness by attacking the basket. We're missing the simple, little adjustments that are the difference between victory and defeat right now. I understand that we currently have injuries, but the last two games could still have easily been wins if these little things had been fixed.

Wisconsin is a must win game. Two losses are not too much to overcome in a conference this balanced, but it will be much more difficult. We cannot lose another game at home and we have to win at least six of the eight remaining road contests if we hope to win this conference. That goal is still attainable. We must not lose sight of that even now. It will not be attainable if the changes above are not affected.

This could be a minor hiccup. Kramer and Hummel could return healthy on Sunday and we could reel of 16 wins in a row to breeze into Indy with a #1 seed. This team is more than capable of doing so, but they need to freaking act like it. Early conference play has showed us that while this league is extremely balanced, there isn't one team that is head and shoulders above anyone else. I think only two teams have the ability to get to that point, and that is Michigan State and Purdue. In my opinion only those two teams are capable of getting hot and running off a string of victory after victory. Right now Michigan State is much closer to that than we are. I like Boilerdowd over at Boiled Sports, but I refuse to give up on thinking Big Ten title just because of a couple of setbacks. Giving up and saying, "Oh well, there's next year." makes us no better than Indiana right now.

This team needs to play mad. They should be as pissed off as I am that they are basically a couple of plays from being 14-1. Screw this Jedi crap of being nice. It's time to go Darkside on the league and give into our anger. Hell yes we need to be angry. Excuse makers will say, "but we were missing two of our best players." So? This was a winnable game even without them. Deal with it and go win the game. You guys are collectively better than this. Act like it. What happened to the attitude of, "No one is bigger than this team," that prevailed after Scott Martin transferred. This mistakes that are occurring shouldn't happen whether it is Robbie Hummel out there or Mark Wohlford. It can be easily fixed, so do it. We've played mostly like crap and we're 11-4 with three very close losses. Fix what needs to be fixed and dominate like we can dominate.

Moral victories mean exactly diddle squat. We got a moral victory last night, but it's not like we get a little asterisk in the loss column. Louisville faced a similar situation last year against us with injuries and suspensions, but we still won. They did not get moral credit because of who was missing and neither will we. Right now we need to make a huge statement against Wisconsin.