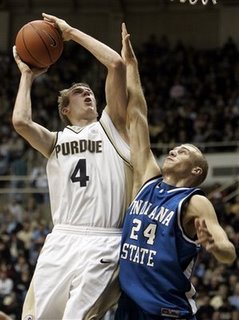 My colleague Boilerdowd over at Boiled Sports had a wonderful wrap up of Saturday’s Indiana State contest. I didn’t get a chance to watch much of the game until later Saturday night, but the best words that describe it are as follows:

Sometimes that is all it really boils down to. Did you score more points than the other team? College football is probably worse than college basketball when it comes to this, but it is still pretty unique. In both cases, it is one of the few places in sport where your margin of victory is sometimes just as important as the victory itself. As an example, I attended yesterday’s Colts game. They beat the winless Lions 31-21 in a pretty lackluster effort. Had they needed the BCS, it would be a "bad win" since they beat an awful team by only 10 points and were tied in the fourth quarter. Instead, it was chalked up as another win, and counts just as much as their blowout of Baltimore a few months ago. Sure, you have your strength of victory tiebreakers and everything, but ultimate the result is more important than how it was obtained.

We tend to lose sight of that in college sports. We see Indiana State on the schedule at 1-7 and think automatically that another 35 point win is in order. Most of this comes from the fact we have a little #17 in front of our name, as if it is a talisman that will waive off any attempts by a lesser team to beat us. In the college game, kids are too prone to simply have an off night to think that each game is automatic.

I will agree that Purdue hasn’t looked solid so far. Since falling in overtime to a very good Oklahoma team things have been a bit off. With finals this week, maybe the guys were naturally a bit distracted. After all, if they don’t perform in the classroom this week, Indiana State could be the last game for some of them for a long while. I don’t know of anyone in academic trouble, but if we had a guy or two sweating a final I am sure a 1-7 team wasn’t fully on their minds.

As a student who attended many games like this, I’m sure the crowd thought it was pretty automatic as well. No one counted on the fact that Indiana State was getting one of its better players back. They are a hustling team that can make life difficult if a few things go their way. They also gave us some troubles a year ago, so to me it is no surprise that we struggled a bit. Still, it is good to be at hte point that an emotionless game like this comes off as an easy win. Three years ago it would have been a loss.

Watching sports, especially when it comes to Purdue, is one of the few areas of my life where I am eternally optimistic. Even when we trailed Michigan State 21-0 this year in football I was working out scenarios in my head as to how we could come back, win, and keep the bowl hopes alive. Right now things are not as dire as that. I think this week off will do the guys some good. If we can beat Davidson in Indianapolis things will look much better going into the conference season (provided we don’t spike ourselves against IPFW or Valpo).

Positives from the Indiana State game:

Robbie Hummel – Welcome back! That is the kind of effort we have expected from him all season. While everyone else was stuck in a malaise Robbie was taking the initiative and creating his own shot. The entire second half was his playground. Robbie is one of many guys we have that can take over a game like that for stretches. E’Twaun did it for a time in both New York games. Keaton Grant, JaJuan Johnson, and I think even Lewis Jackson are capable of doing the same. I am confident that this team will be even better if Robbie keeps playing like this and both Keaton and E’Twaun can find their shot.

Lewis Jackson – LewJack had a very good game. He had a key 5-point stretch in the first half that gave us the lead for good. He was smart with his shot selection, hitting 5 of 7 from the field too. I was disappointed we were only in single digits for assists, but LewJack still had four to lead us in that category.

It was a win – Again, are things really that bad if, for the most part, we can play like crap and still win by 14 without ever being truly challenged in the final 30 minutes? This is why I am not really panicking yet. We haven’t come anywhere close to playing our best basketball and we’re 8-2. That 8-2 could easily be 10-0 with a few less fouls called against Oklahoma and a much better game against Duke. As I have said before, I would much rather play our worst basketball now and work out all the kinks instead of in March.

Negatives from the Indiana State game:

Keaton Grant and Chris Kramer – This is another point I have made before, but Chris Kramer has not been the same since knocking himself silly against the basket support at Clemson last year. Since then, he hasn’t been nearly as aggressive as he can be on the offensive end. Chris can be a great slasher. If he ever gets that aggressiveness back he could be a great asset but cutting to the basket. He seems more content to sit on the perimeter and shoot only when necessary now. He goes to the basket only on fast breaks after he creates a steal. If he is going to be the leader that this team expects him to be he has to get back to attacking the basket.

As for Keaton, I don’t know what the issue is, but he clearly needs to find his shot. Boilerdowd pointed our both players’ defensive issues, but those can be corrected with a good swift kick in the rear by coach Painter. Keaton has lost all confidence in his offensive abilities. Some are speculating that he isn’t in full game shape after knee surgery held him back over the summer. That could be part of it, but we need him to become a bigger offensive threat as well. If we can get both of these guys scoring again that will free things up for E’Twaun, JaJuan, and Robbie.

3-point defense – One look at the stats shows why Indiana State was able to make this closer than we expected. They hit 9 triples at a 37.5% clip. Just as our own 3-point shooting kept us in the game against Oklahoma, it kept Indiana State from being blown out. We’re not rotating well right now with our perimeter defense. Too many teams are getting unchallenged shot. This was as true against Duke as it was against Arkansas-Pine Bluff.

Davidson has truly set itself up as a crossroads game. Stephen Curry is one of the greatest natural shooters in the history of college basketball, but the Wildcats are much more than him. If you take away that crazy Loyola-Maryland game where he was held scoreless, no one has kept him below 27 points. Because his teammates can do so much it is hard to prepare a game plan for them. If he’s going to drop 30 point regardless, how do you stop them?

First off, we need to use this week to rest and refocus. Academics are the primary concern. The 2003-04 season came undone when Chris Booker got himself academically ineligible for the second half of the year. We cannot afford to have that happen again. If any of the guys on the team are reading this, please, stop now and get ready for your next final!

Secondly, we need to focus on many of the issues mentioned above. They are easy fixes though. Once we get past those we can be a very dangerous basketball team once again.