That's what I'm talking about!

Share All sharing options for: That's what I'm talking about! 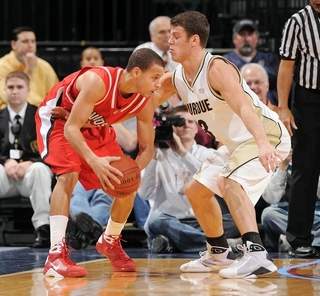 Many of Purdue’s devout fans saw yesterday as a challenge. Despite our record, it seemed like a paper 8-2. Both losses were to the only ranked teams on our schedule, who each happened to be in the top 10. A third loss to a ranked team would raise even more questions.

This was an unbelievable game yesterday. The crowd was somewhat tentative at first, but quickly warmed to multiple standing ovations as we jumped out to a 21-0 lead. There is little we could do wrong. Even in the inevitable lulls of the game we had success. One example I can think of is a stretch with about nine minutes to go in the game.

Davidson was on a little 12-2 run that got them to 66-49. We took possession with 9:50 to go after a 3-pointer and though we didn’t score, we had about a minute and a half long possession that drew three fouls and featured two offensive rebounds. At that point, scoring wasn’t nearly as damaging. Davidson got the ball back on a steal with 8:15 left, but by then we had taken away almost a fifth of the remaining time for any comeback.

It is little stretches like that which can make a huge difference in games down the road. It seemed like the final 10 minutes was one long such stretch. After running them down the floor on offense for 30 minutes, we backed off and took away what they needed most: time. This was teh textbook way you want to win a game. Build a big lead early, keep pressuring them on offense, then take the air out of the ball late.

Positives from the Davidson game:

Defense – Isn’t it obvious? We took the nation’s leading scorer, who was averaging 32 points per game and hadn’t had a game below 27, and we held him to 13. Stephen Curry didn’t have a moment’s respite whenever he had the ball. Kramer led the way, but special credit needs to be given to E’Twaun Moore, Lewis Jackson, and Keaton Grant for picking him up at key times. Every time he managed to shake Kramer someone else was right there to greet him. Kramer got the glory on ESPN, but this was truly a team effort in shutting down one of the best in the game. The shots he did make were challenged. Fortunately, he only had a couple, "Man, he is REALLY good," types of shots that dropped.

As I said last night, Curry couldn’t even go to the bathroom without Kramer or someone else there to help. He’ll probably have more room to do stuff on the flight home to North Carolina.

Offensive balance – This is the type of offense we need the rest of the way. Jackson didn’t score and Kramer only had an early lay-up, but our other six guys contributed almost evenly. It helps a lot that we hit 3-pointers at a 61% rate (11 for 18). We spread those around too. Five different players had at least two triples. Chally had two big ones, as his first really kick started the 21-0 start. His second came at almost the exact same point in the second half and showed we weren’t going to rest on the lead. Marcus Green got involved too, especially on the Little Things side of the ledger. JaJuan had a good game to build his confidence in the post.

We’re at our best when this happens. I have no problem with Calasan and Johnson combining for 22 points and 8 rebounds. We need Marcus Green to do all the Little Things and chip in points where he can. He is a source of unexpected offense and gives teams one more thing to worry about when he is scoring. Kramer was vintage Kramer on offense early on, but after he took a fall on a drive in the first half he became timid again. Lewis Jackson seemed like he certainly did a lot more than take two shots and dish out only one assist. I guess it just feels like more when the entire team performs this well.

I think it feels like Jackson did more because he pushed the tempo at just the right moments. He may not have made the big pass for the assist, but he quickly brought the ball up the floor in the first half and allowed us to attack before Davidson got set. This was absolutely huge in building the big lead early. We were relentless with our offensive pressure just as much as we were defensively.

Robbie Hummel – The Big Ten is officially on notice. Robbie has had a pair of solid games in a row and seems to be getting better each week. He was a rebounding machine yesterday. He was very smart with the ball in his hands too. He never forced anything and ended up with 18 points and four dimes. He was like the offense as a whole, which was a picture of efficiency.

Keaton Grant – Welcome back! Our team MVP from a year ago has been sorely missed. 15 points was a new season high. He found his shot too with three 3-pointers. We need Keaton to score. If he is scoring and Green is dropping 6-10 points per night at the right moments, who are you going to stop for us?

Free Throw shooting and rebounding – These areas have both been temperamental in the past, but they were huge strengths yesterday. Robbie did his part on the rebounding end with 14, but I was especially proud of how we kept up the pressure even from the free throw line. We were 15 of 18 from the line as a team, and all three misses were in the final minutes when the game was long decided.

The Paint Crew – I have to give thanks to these kids from coming down to Indy and taking over a section of the lower bowl en masse. Last year we were outnumbered by Louisville fans at the Wooden Tradition. This year there was little question as to whose house we made it. Massive credit needs to be given to the Paint Crew. I’ll admit we missed their presence last year. After halftime I moved down from my $10 seat up in the corner to sit in the section directly behind the Paint Crew. It wasfun to see them in action in a venue other than Mackey Arena. The challenge is now issued though. We have the Big Ten Tournament in Indianapolis, followed potentially by a Dayton-Indy-Detroit run in the NCAA’s. Please keep coming! I promise to meet you there.

Negatives from the Davidson game:

E’Twaun Moore – It is nitpicking, but E’Twaun really struggled after hitting a few big shots early. His layup at the 5:13 mark of the first half gave us a 20 point lead, but he struggled to shoot the rest of the game. Since both Robbie and Keaton have started to come on I hope E’Twaun is next. He still is feeling a little off on his shots and turnovers are becoming an issue.

Switching defense – We did a good job when we had to switch screens on Curry, but struggled a little when Davidson tried to go inside-out on us. The only thing that kept them marginally alive was a spate of 3-pointers off of kickouts to Archambault, McKillop and Barr. Those guys are good shooters in their own right. Imagine how different things would have been had Curry gotten his usual 32 and change. Davidson is a team that will be heard from again. We took their star away from them, something very few teams have done, and they struggled because of it. If other teams can’t do what we did they will win a lot of games. Barr was actually under his average with just 6 points.

This was a much needed win. It is the type of win that makes me wish we could get a second shot at Duke and Oklahoma. I have little doubt we could beat Oklahoma in a rematch. If we played Duke like we played yesterday it would have been the barn-burner everyone expected. This team responded very well to the week off and now we have two more tune ups before conference play begins against Illinois. Everything simply feels better about this team now.

Yesterday was a statement day for the Big Ten. Minnesota and Michigan State grabbed huge wins while even Northwestern was impressive in a road loss at Stanford. There are going to be very few easy games along the way. It is the rare year where not playing Indiana twice is actually a disadvantage because they are going to be so bad. When the new polls come out on Monday I expect Purdue, Michigan State, Ohio State, Michigan, and Minnesota to be ranked, while Illinois, Wisconsin, and Northwestern have been receiving votes in previous polls.

It is not going to be easy to win a much improved Big Ten this year, but I like it that way. A much improved Big Ten means more chances for quality wins to improve our NCAA seed. Last season the conference was top heavy with only five teams (Purdue, Indiana, Michigan State, Wisconsin, and Ohio State) being even marginally good enough for the tournament. This year there are twice as many if you consider Iowa (who lost to Drake yesterday) in the same boat. Winning this conference will mean a lot more this year, and that is how I like it.

Along the same vein we must also hope Davidson goes on to have a successful year in the Southern Conference. They have one big game left at Duke before the tournament. Unless they fall apart in the Southern Conference they will go to the tournament. It is entirely possible they will go there with a 30-3 record and the only three losses coming against us, Oklahoma, and Duke. We have to hope they do just that so we can get the maximum value out of this win.