State of the Balls

Share All sharing options for: State of the Balls 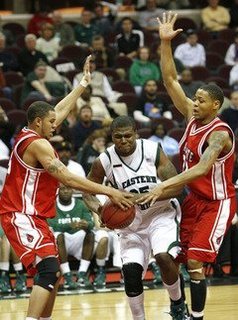 It’s an old joke, at least for me, but I have always wondered if the President of Ball State University has to give a State of the Balls address each year. I know surprisingly little about our MAC brethren in Muncie. I have only been there a few times, mostly for a couple of parties with friends while in college. When you look at those cases, my view of the campus is even more skewed since I didn’t see much of it sober. The University is responsible, however, for the one highlight of my brief musical career. That’s right, this write was an outstanding trombone soloist at the 1998 Ball State jazz festival.

It’s okay to take a minute to bask in my fame and greatness.

Seriously though, the Ball State basketball program is one filled with ups and downs. When the Cardinals are good, they can beat anyone in the country. Their last great moment was the 2001 Maui Invitational when the Cardinals shocked #3 Kansas and #4 UCLA before losing to Duke in the final. Several stumbles in MAC play meant all the work did not turn into an NCAA berth, but they did make an elite appearance in that year’s NIT.

Ball State’s most famous NCAA Tournament appearance of their seven visits probably came in 1990. That year the Cardinals parlayed a #12 seed into upsets of Oregon State and Louisville into a Sweet 16 appearance. Once there, Ball State came within a basket of upsetting eventual champion UNLV. The Runnin’ Rebs Sweated out a 69-67 win, their closest of the tournament. Had Ball State won, they would have faced the infamous run and gun Loyola Marymount (led by Bo Kimble during their magical run) in the West Regional Final.

Ball State hasn’t been to the NCAA’s since 2000, and their more recent history is forgettable. Tonight they will look to come out of those dark times by hosting Purdue in one of the biggest games ever at Worthen Arena.

The 2008-09 season is already a major step in the right direction for Ball State. After finishing with a 6-24 record (spurred by an 0-11 start) Ball State has already gathered two thirds of its wins from last year. The four wins aren’t great (E. Illinois, Wisconsin-Milwaukee, IPFW, and Division 1 transitional member Southern Illinois-Edwardsville), but they are wins. The Cardinals struggled mightily with very few scholarship players last season in the wake of the Ronny Thompson debacle. They were similar to Indiana this year in that they played hard, but simply didn’t have the talent to compete each night. I respect that.

We will be the fourth in state team that Ball State will face this year. The Cardinals have already lost in trips to Butler (64-55) and Evansville (73-63). Both of those teams are playing some pretty good basketball at the moment with a combined 12-1 record. The only loss in those 13 games came when Butler beat Evansville.

Depth is still an issue with the Cardinals as they list only 10 players on the roster. Because of that, all 10 players play extensive minutes to keep everyone as fresh as possible. Everyone plays an average of about 9 minutes per night, so we will get a variety of looks. This is also a fairly young team with only three seniors.

It is no surprise, then, that three of Ball State’s leading scorers are those seniors. 6’5" forward Anthony Newell is the team’s best player averaging better than 15 points and 10 rebounds per game. He has been a starter for three years through the storms, so he is pretty much the current face of Ball State basketball. He shoots about 15 times per night and can step out and hit the three. His numbers are probably very similar to what Marcus Green would put up as top banana on a MAC squad, and they are very similar types of players.

6’8" Freshman Jarrod Jones is the team’s second leading scorer from the other forward spot. He averages 12.4 points per game and almost seven rebounds. Jones works almost exclusively in the paint, and it is reflected with a 55% accuracy rate from the field. Ball State will probably try and work him down low against Calasan and Johnson while playing the inside-out game with Newell.

The other two seniors are guards Brandon Lampley and Laron Frazier. Both average just over 9 points per contest. They can be dangerous from 3-point land as each shoots over 40% from long range. Lampley is especially good at distributing the ball to his teammates with better than four assist per game.

Outside of this core group of four, however, Ball State doesn’t have a lot. No one in the other group of six regulars is averaging better than five points per game, but freshman Randy Davis and sophomore Malik Perry can be dangerous players. Both players did not play the first two games for whatever reason, but have contributed some value since. Perry in particular had 13 points against the Boilers in Mackey Arena last year. The overall lack of production shows that while there is depth, it is not truly developed yet.

This year’s Ball State is clearly better than last year, but it is probably still a year or two away from being able to seriously compete with the likes of a major program. Once again we find ourselves playing Ball State at a time where we are struggling somewhat to find our own identity. The 70-57 win over a then winless Cardinal club was anything but dominating, but we still pulled it off. I am not convinced a similar effort will allow the same result tonight. The Cardinals are better, and with a home crowd feeding them energy we could be in trouble if we don’t take the game seriously.

The Cardinals take care of the basketball for the most part and are a decent rebounding team. These two elements, if executed well, could provide us with headaches all night long. They also hit better than 68% of their free throws, so we must avoid getting in foul trouble. This is especially true of our bigs, who will have an advantage we must exploit in the paint.

Fortunately the game plan looks easy on paper. If we can key on Newell and Jones, containing them, we should be able to win. Ball State simply cannot afford to let its two leading scorers have an off night and expect to win. They are night a high scoring team, but good defense on their end has allowed them to keep each opponent except Evansville under 70 points.

We, however, are averaging 77 per game with four players averaging in double figures. Ball State hasn’t quite seen the talent level we exhibit either. Even if Robbie is sidelined for another game I still feel pretty confident we can get this one. We’re probably at the best time of the season for him to miss a few games, as we will be heavily favored both tonight and Saturday against Indiana State. If we go inside to Johnson and Calasan repeatedly we have an advantage. If E’Twaun and Keaton can find their shots we should have little trouble as well. We should only be wary if our defensive inconsistencies continue, we keep turning the ball over, and no one can shoot. Personally, I think this will be a good game to get everything firing the right way again because the Cardinals can challenge us. That in mind, it is a challenge we can easily overcome if we get moving back in the right direction. Purdue 80, Ball State 65.