Someone bring me an axe...

Share All sharing options for: Someone bring me an axe... 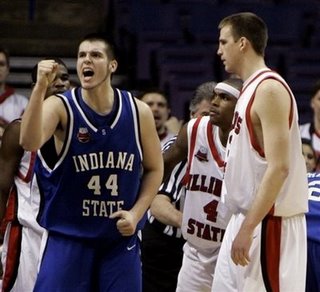 For the longest time the Indiana State men’s basketball program was the answer to a trivia question. They were the only school that had played in the Final Four in every NCAA Tournament it had been invited to. That was true until they were invited to the 2000 NCAA tournament and lost to Texas in just their second appearance. They followed that up a year later when Michael Menser and company upset 4th seeded Oklahoma in the first round.

Since then the Trees haven’t done much. The program of Larry Bird is often one of the bottom teams in the Missouri Valley Conference. Since going to the dance in 2001 they have seasons of 5, 7, 9, 11, 13, 13, and finally 15 wins last year.

After steady improvement the past few seasons Indiana State has taken a major step back. The Sycamores won 15 games a year ago, but had major issues playing away from the Hulman Center in Terre Haute. At home they were 12-2, but finished a meek 2-13 on the road before splitting a pair of games in St. Louis for the conference tournament. Among those losses was a 71-60 loss to Purdue on December 1st in Mackey Arena

This year the venue hasn’t mattered much for the Sycamores. The lone win came last Sunday by just two points over Lamar in one of the consolation games of the Marques Maybin Classic down in Louisville. JuCo transfer Rashad Reed hit the winner with less than a second to go for the 68-66 win. It could even be qualified as a good win, as Lamar is 6-2. In that three day tournament the Sycamores suffered losses to host Louisville and Ohio.

The Sycamores began the season with close losses to Northern Illinois (86-79), Murray State (67-61), DePaul (75-70), and Arkansas State (56-54). They have been competitive in most games. But in the one game against a team of our own caliber or better they were blown out by Louisville 83-43.

Indiana State is a very young team. The lone senior on the roster is 6’8" 255 pound forward Jay Tunnell. It is no surprise that Tunnell is the team’s leading scorer at 12.4 points per game and rebounder at 6.6 per game. The Sycamores feature a nine man rotation, but only Reed (11.3 per game ) and sophomore Aaron Carter (11.6 per game) average in double figures with Tunnell. Scoring is not Indiana State’s strong point. As a team they only score about 62 points a night.

This should also be a game in which we have little trouble winning on the boards. Indiana State only averages 33 boards per game, and since they only shoot 39% from the field there are plenty of missed shots. They are short on size except for Tunnell and 6’11’ Josh Crawford. Crawford has been inconsistent. In three games he scored 41 points, but only has six points in the remaining five games. As far as contributions elsewhere Reed and Tyler Cutter are both solid distributors, averaging more than 3 assists per contest.

As with most 1-7 teams though, most of the numbers aren’t good. Reed is the team’s main 3-point threat with 18 bombs on the year. The Sycamores shoot better than 37% from long range, so they do have the ability to get hot from outside. Honestly though, they would likely need to shoot out of their minds to have a chance against us. They also do take care of the ball with less than 15 turnovers per game.

It is hard to judge exactly what Indiana State does in winning games with just one win on its record. Carter was the leading scorer against Lamar. In that game Indiana State trailed big late before a 14-4 run at the end of the game to secure the win. The Sycamores are a team that has had to play from behind most of the year, so if we can get a big lead on them we shouldn’t have much trouble.

Honestly, this game should be about as much of a mismatch as the Ball State game. Indiana State simply doesn’t have the talent to compete with us if we are playing well. It is the type of game where the only way we lose is if we beat ourselves. Last year we struggled against them, but that was in one of our worst stretches of the year.

There were plenty of positive signs during the Ball State game. We improved our defense and didn’t allow an overmatched to even have a chance of pulling an upset on its home floor. This is the final defensive tune up before a huge game with Davidson next week. We should expect little trouble from one of the bottom teams in the Valley. Purdue 75, Indiana State 50