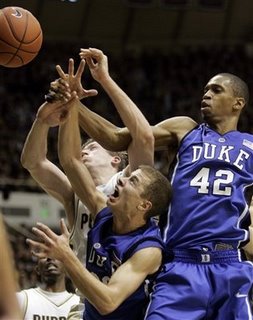 Well, that was ugly.

In walking up to Mackey Arena last night everything was going to plan. The place was packed and you could feel the charge in the air before tipoff. As tightly as we were crammed into the seats I think the ticket office found a way to cram at least one more person into each row of each section. I know the way I had to twist my spine to fit between my wife and the gentleman next to me wasn’t comfy, but at the time it felt more than worth it. The Paint Crew was perfect, the crowd was loud, and everything else felt like the college basketball game of my dreams.

On the drive up I was battling a severe headache and fatigue. After a pretty stressful week I was actually questioning if I had the energy to go to the game. Once I walked into the arena though, that energy fueled me. I felt alive because you could literally feel the collective good vibes.

Then we had the tipoff.

I will say this: Duke is a very, very good team. They are better than I expected, and that is saying much because I already knew they were very good. We made a ton of mistakes last night. The Blue Devils, in return played a very clean, focused game. They made us pay for every single mistake that we made. The bottom line is that we could never generate any positive momentum. Any time we came close to making a move Duke made a play or coach K peed on our collective fire with a savvy timeout.

In a game like this where your opponent has superior talent and experience you cannot afford to have the number of mistakes we did. Tow in, you need to play a near perfect game and see which way the fortuitous bounces go. You can’t count on them to just have an off night. Everything that was fortuitous seemed to go Duke’s way, be it a favorable bounce on a rebound, a key loose ball, or a kickout for a big 3-pointer. Unlike the Bucket game where there were barely any negatives, this was a game in which there were hardly any positives. We embarrassed ourselves at home on national TV. It will take a long time to get that respect back.

Key Factors in the loss:

Defensive breakdowns – Duke was incredibly good at driving into the paint to initiate a double team, then kicking it out for a wide open jumper. Kyle Singler and Jon Scheyer did most of the damage here. They only combined on five three’s, but each of them seemed like a dagger. Because of that and our own dearth of outside shooting it seemed like more.

We didn’t only have defensive breakdowns here, but Duke seemed to be able to create its own shot whenever it wanted to. We struggled against their defense to find any daylight. E’Twaun Moore didn’t even get on the board until the final ten minutes. Still, when Duke needed a big basket it was able to find the open man or break us down off the dribble. Singler and Scheyer also killed us by going a combined 13 of 14 from the line.

Rebounding – This was flat out terrible. The couple of times we did play good defense and forced a missed shot with the clock running down Duke was able to grab the offensive board for a second chance. They also had numerous little tips for easy baskets as a result of failed box outs. I don’t know why it is so hard for us to grab the ball on a rebound. Many times we were in position last night only to have a couple of guys fight over it. A few times we simply didn’t just grab the ball when it was right there. Something has to change. We cannot win games like this when we are outrebounded by 18.

Offensive discipline –In the second half Duke was more than content to work the clock for a good shot. That’s a great luxury that a double digit lead affords. Most of the time they still got good shots. When they didn’t, they were at least in position for the offensive rebound. We had no such discipline. By the second half it seemed like we were so frazzled by Duke’s smothering defense we simply waited for the first open look and took it. We had our two bigs in Calasan and Johnson handling the ball on the dribble 18 feet from the basket! We were actually getting some calls, but a few key blocked shots made us too timid to drive the lane. Our two best scorers in Hummel and Moore were essentially no shows until the final minutes when we were already down big. We weren’t hitting jump shots, and only Johnson and Calasan were legitimate threats to score for 30 minutes.

Once we missed our first few shots and fell behind 7-0 you could feel this team’s collective sphincter tighten. It was really over from there, which is sad because you could tell a great crowd was itching for any reason to explode. The best moment was when Keaton Grant pulled up for about a 23-footer from the top of the key with 3:03 left in the first half. If he hits that the roof comes off the place and the game is changed. It was a miss, and we never recovered. There were too many 4-6 point shifts because we would miss a big shot or even an easy one only to have Duke come down and score in transition.

Much of the credit does go to Duke’s defense. Their man defense completely disrupted anything we tried to do. Even when we tried to adjust we couldn’t get open looks. I cannot discount Coach K’s coaching ability. Twice in the second half he saw a situation where we had the smallest amount of momentum going and the game clock read seconds before a TV timeout. He called a timeout on both dead ball occasions and allowed both stoppages to kill our momentum. Those are little plays that get lost in the game, but in my opinion they were big. They came just before the 8 minute and 4-minute TV timeouts of the second half. Each time we had just made a big defensive play to get the ball, but generated nothing on the following possession.

Where do we go from here?

This was easily the worst game we have played since probably the Wofford loss a year ago. Still, I did like a couple of minor things. I liked that once against that Calasan and Johnson were threats to score inside. They held up their end of the bargain, but got very little help.

Second, we just got beat by one of the best teams in the country. It is my belief that Coach Painter will not let this team forget these two losses. I think this team saw the crowd and simply thought it would carry them to victory. They really didn’t know any better. We’ve only lost twice (or less) in Mackey Arena in these guys’ careers, so they have grown accustomed to the home court advantage. They felt that Duke would welt in the face of that crowd, but Duke almost never does that. They are who they are for a reason. They don’t flinch in situations such as this. As this team gets better I expect we can challenge the Dukes and North Carolinas of the world. Last night, however, we unraveled over the course of the game and Duke made us pay.

The rest of the non-conference season is very easy with only Davidson at Conseco Fieldhouse as a major test. That is now a must-win game. This loss doesn’t hurt us that badly. It’s not going to be a "bad loss" in terms of tournament positioning. At ebst, we blew a chance at a major win and a better seed. Numerous teams have provent hat you only need to make the tournament to make a big run, and we have historically done better when the expectations haven’t been as high. If we go through and win the Big Ten we will still be a top 4 seed somewhere. I still think we’re one of the best 15 teams in the country, but it is not going to be as easy to hold on to that as originally thought.

A side note to remember is this. Many were comparing last night's game and it's build up to win UCLA and Lew Alcindor opened the building in 1967. We actually lost that game in convincing fashion.

One final note: I do want to thank the reader sitting about two seats over from me last night. It was nice to meet you and thanks again for reading!